April 15, 2012
D & I got up around 5:30 for the Havasu Half. Not so much from the alarm going off but more from the fact that we fell asleep around 8p.m. watching HGTV. We get pretty wild when we go out of town. Watch out. When we woke up the weather was cloudy and cool and looked like it could rain. Thankfully there were just a few sprinkles but the wind was pretty strong. Of course this is the one time I only brought one running outfit. But actually it worked out because once I started running I was plenty warm.
Our hotel was only a mile away so with a short drive across the London Bridge we arrived in the parking lot.   We waited in the car for awhile and then headed to the start. There were plenty of porto potties and a bag check if needed. Since the race started near a park there looked like there might have also been real restrooms to use.


After the national anthem and some race announcements the race started right on time at 7:30. There was also a kids mile run at 7a.m. and the 5K D ran in started at 7:45. For this half they had pacers (which I don't recall them having at their other events I have run in). According to the race results page there was about 500 half marathoners and 222 5k participants. Everyone seemed to just line up in conjunction with where the pacers were standing.
The first few miles were a loop around an island and then it was up and over the London bridge and through  Lake Havasu state park. The turn around was around the 8.5 mile mark to head back through the state park over the London Bridge and back to London Bridge Park to finish.


At first I stuck with the 2:10 pacer and then found myself wanting to go faster so thought what the heck. Pedal to the medal and I came upon the 2:05 pacer. I knew my PR was a 2:07 (on a downhill course) so a 2:05 would be my fastest half yet. I was feeling good and thought I would go with it but I knew it would be tough since the route was hilly and windy. (I kind of thought of trying to catch up to the 2 hour pacer but didn't want to bonk and then throw a temper tantrum).
I stuck with the pacer until around the 7 mile mark. I slowed to try to drink (oh side note I did drink successfully once, the other four times I wore more then I got in my mouth but I only chocked once.....success?) because prior to that I hadn't had much because it was cooler and I didn't want to lose the pacer who was wearing a belt with water so she never had to slow. But I was getting thirsty so I decided it was a necessity. When I looked up after sloshing myself the pace group was ahead of me and after that I just couldn't catch up. But I knew that I was ahead of schedule by some magical computations I did in my brain and the pacer was a few minutes fast so there was hope for a PR even though I had fallen a little behind.
I was really  feeling it after the turn around since the wind was pretty strong in my face (and doing wonders for my hair) but I wanted a PR so bad that I had the get tough talk and pushed through. I charged down the bridge and towards the finish. The crowd was great at the other side of the bridge cheering and I got to high five a little girl. A guy tried to pass me but I wasn't having it so I pushed harder and I must have had a pretty determined look on my face because even the police officers who were directing traffic cheered for me and ignored the group that had run by before me. Or maybe I just looked like I was going to die and needed an extra boost. Either way it worked and I passed a few people near the finish area and finished with a new PR of 2:05:22.

I was handed a medal and a water bottle right away. They had set up a nice little race festival that had free beer for participants and shopping booths, music and a snow cone guys. Unfortunately the weather was kind of crappy and it was pretty cold. D and I grabbed our beer (D finished the 5k in 26:13, whooo go D) and were about to head off when he reminded me that I was supposed to get the medal of all medals.
This half was my 3rd one (Temecula and the Arizona 1/ 2s being the others) and if you do three of their events (Hometown race series) you get a huge medal. I went over to the packet pick-up area to ask and they directed me to the race directors/coordinators who were so excited. I guess I was the first one to do all three and ask for my mega medal. It was really exciting and fun to meet them. They were so happy for me that I had done all three. I am happy that they provide me with so many racing opportunities in the area to use towards my 30 before 30 goal. Plus their events are always well done and fun to participate in.
After posing like I am an important person with all of my medals D and I headed for breakfast across the road at Makai cafe and ran into this view and I of course made D take a picture of me looking all big and important with my medal haul.

I had my classic eggs, potatoes and bread product. And it was delicious. The services was also really good at this cafe even though they were very busy. 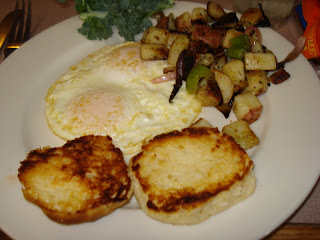 Overall this was a great race. I may be biased because I PR'd and got the medal of all medals but it started on time, was well organized, had a nice scenic course, and great race course support. Water and/or gatorade about every mile and awesome volunteers. The only thing is there is no gu at these events so bring your own snacks if you need it. They always go to the effort of putting together a little festival at the finish line with vendors and treats for the runners which is nice. I think if the sun had been out the race could have been a bit warm but the clouds kept the weather perfect. I will take cool and rainy over hot any day. A great event and I would recommend it to anyone looking for a fun destination race. 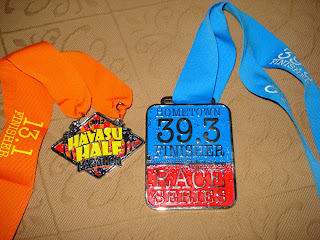 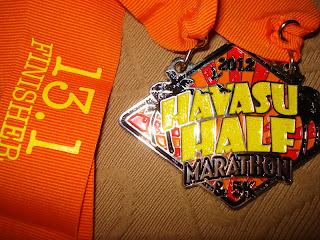 30 before 30 Lake Havasu Half medals PR