This morning I woke up at 5:45 to drive over to Goodyear for the inaugural Arizona Half Marathon. Some friends of mine that live in Tempe let me crash in their guestroom. It was fun to be able to hang out with them. The race was located in Estrella. I woke up with a bad attitude and did not want to go run. I briefly thought about just staying in bed, making breakfast for my friends and driving home but I managed to get myself out the door. On the way I dropped by Circle K to get some beverage. I love gas station coffee. So many choices, tons of creamer all for around $1. Can't go wrong. 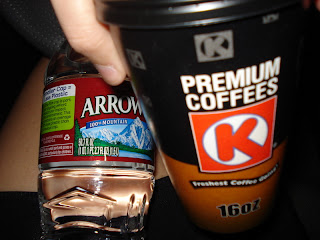 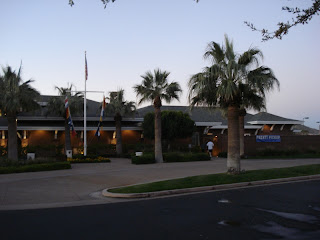 Since the race was kind of in the middle of nowhere I just picked up my number this morning at the Starpointe Residents Club. The club area was located across the street from a Safeway so there was plenty of parking for everyone. This was also the start and finish area. 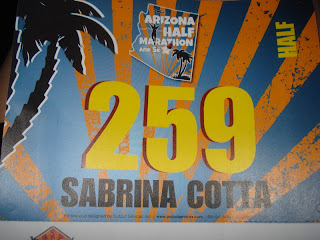 Because I had registered way back in October I also got a bag and a hat along with the race t-shirt. Packet pick-up was fast and painless. 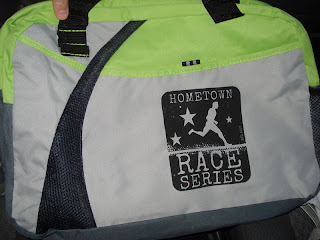 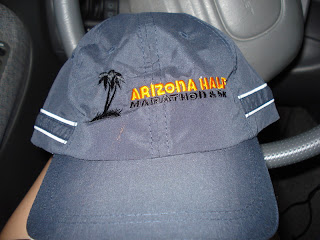 You think all this free stuff in combination with coffee would make my sucky attitude go away but it held on. After I picked up my number I  sat in my car for what seemed like forever and ate a cliff bar (choc. mint). The race didn't start until 8:30. I picked up my number around 7a.m. so maybe bad planning on my part. The race started right on time though. They also had a kids mile fun run, and there was a 5k that started at 9a.m. 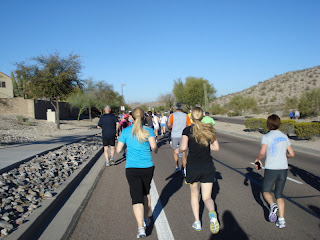 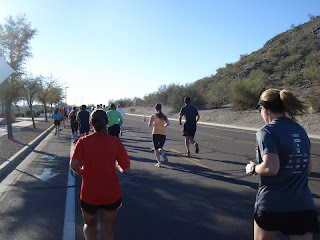 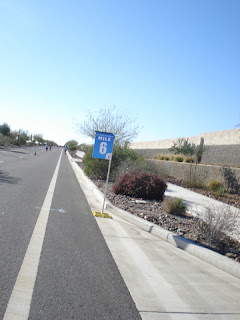 The course was slightly hilly (course was out and back on some main roads. There was plenty of space on the roads and it was clearly marked). There was no shade and it was pretty warm out by 8:30. (Maybe next year start the race at 7:30). And I was not having it. Everything was stupid in my head. Running is stupid. My outfit is stupid and my shirt is chaffing me. I am tired. All the songs on my ipod suck and are stupid. My shoe has a rock in it, stupid shoe. I am hot. I am thirsty. Basically if I had thrown myself on the ground and pounded the pavement and kicked my feet that visual would have coincided with what was going on in my head. Basically a four year old throwing a temper tantrum. Am pretty sure if the course had been lined with puppies, kittens, unicorns and rainbows I would have been annoyed with that and thought it was stupid.
I don't know what my problem was. But after six miles of being a big baby I had a stern talking to with myself and decided to quit being a butt face. So even though I felt pretty miserable (I think this week was just super busy, I was a little dehydrated and mentally just not there plus I felt weird and water logged, like I was drinking way too much but was still really thirsty.) I decided instead to focus on thanking all of the wonderful volunteers and taking pictures of the pretty course.

And after 2 hours and 14 minutes it was over.

Not my best showing, but not my worst. I truly believe most of running is mental and today I was a mental turd so that did not bode well for me in the end. This race felt really tough and I didn't have that great of a time (which is no reflection on the actual race or course, just a reflection on my crappy attitude). 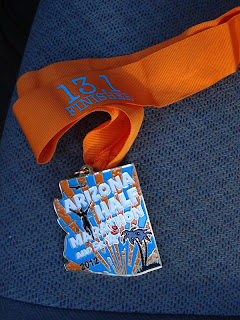 I would like to say that I got over myself after I was done running and got to lay in the grass (I miss grass) for awhile but I was still feeling stabby. I decided that a Slushie was what I needed for my 3 hour drive back home. So I stopped by Circle K to grab one. And the machine was broken. AAAAAAAAAAAAAAA. I stood there seething for awhile. Curse you Circle K, CURSE YOU. So instead I got 44oz of diet dr. pepper which was the only size option. Who doesn't want a 44 oz soda. ME. I don't want a cup so big I can't lift it with one hand.
After driving for an hour I had to stop and eat something before I passed out and killed everyone on the road. I pulled off in Casa Grande and got a Taco Bell chicken fresco burrito. 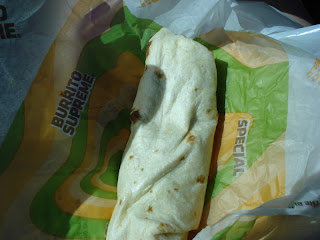 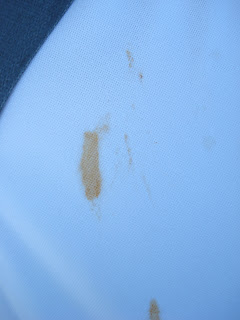 And then got it all over my shirt. My nice white shirt. ARE YOU KIDDING ME. So that didn't help the mood. So I seethed and drove for awhile but then after listening to my 70's Super Groups CD I felt better. Hard to stay in turd mood when The Guess Who is singing American Women and The Kinks are singing Lola. Plus D lets me spend all our money on running and stays home to take care of the dogs and the house while I am away so I had to be on my game when I got home and need to be more appreciative that I have the opportunity to do races. Plus he just came home with a Slurpee for me....um the level of awesome is indescribable. 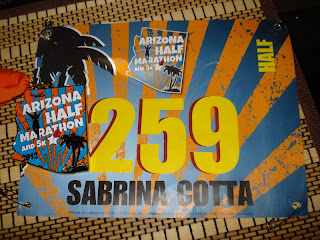 Even though I was in a craptastic mood, this race was nice. It was well organized, had great volunteers, aid stations every mile, the shirt and medal are nice and the course was pretty. Registration was only $60 and I got lots of free stuff out of it. Only suggestion would be an earlier start time. They also don't hand out gu on the course so make sure to bring your own. The same company that puts this on, also puts on the Temecula half and the Lake Havasu half and they have consistently done a great job. I would recommend their events to everyone.
30 before 30 Arizona half Aspaeris shorts D Excuses medals