February 16, 2016
My friend Cat over at My Heart's Content had a great idea to highlight the best places to run in your area. So this is running 101: El Paso Edition. 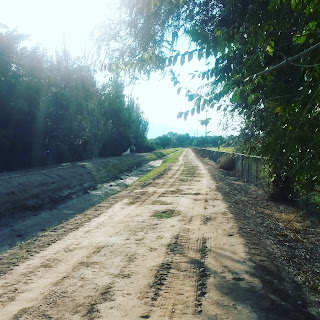 There is a long line of irrigation canals that run through the the west side of town towards the New Mexico border. You can do varying lengths of runs out there including long runs on a dirt surface. The canals also hook up with the Rio Grande river so you can run along that as well....sometimes there is even water. The easiest way to access the canals is to park at State Line Barbecue Restaurant cross Sunland Park on foot and head towards the New Mexico border on the sidewalk until you meet up with the canals or the river on the right hand side. Hit up 150 Sunset for brunch after. 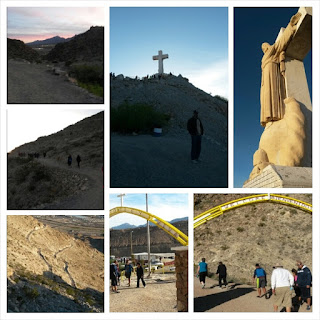 Or as I refer to it, the Big Jesus. This statue can be seen from afar throughout the city. Located right across the border in Sunland Park New Mexico, this is a dirt trail up to the top and quite a climb. While there is some concerns about safety as it is right on the border and people have been harassed and robbed here in the past, Border Patrol is all around, but it is best to go in a group or go when one of the many pilgrimages are occurring throughout the year. There is parking and porto-loos at the bottom of the trail. Round trip is around 5 miles. Ardovino's Desert Crossing nearby has some amazing Prickly Pear Mimosas for you to re-hydrate with after. 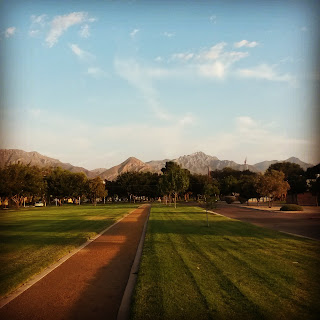 Fort Bliss is home to a lot of tanks, a lot of soldiers and a 3 mile flat loop of soft gravel the runs around the parade fields in the prettiest area of the base. Perfect for some repeats and some nice views. DOD card holders can get on base at any of the gates, those without will have to get a pass from the public access gates such as the Buffalo Soldier gate.

The Trails at Chuck Heinrich Park 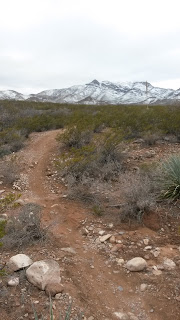 This park is the access point to miles and miles of trails including one of my favorites, Lazy Cow. There is parking and a porto-loo at the park. Watch out for mountain bikers. The trails in El Paso are rocky and hostile so trail shoes and water are always recommended. On these trails you can run distances from 3 miles to 20+ depending on what trails you decide to take. Stop by the running store Up and Running for a trail map. 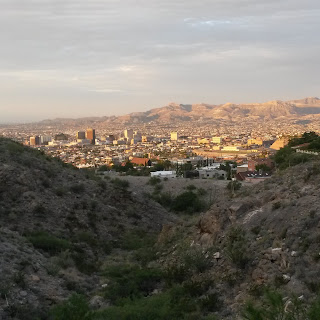 On Sunday Scenic Drive is closed to car traffic in the morning to allow runners and bikers to torture themselves with a steep climb to the best view of downtown El Paso and Juarez in the city. A great run is to start at the local running store Up and Running , the only specialty running store in El Paso, and head down Sunbowl, take a left on University to run through the UTEP campus and climb up University to Rim and Rim up Scenic, hit the flag pole at the top, or for extra torture go all the way down the other side and back up. Depending on how far you go, makes for a 6 to 8 mile run. Hit up Crave or Block for breakfast after.

Where to Shop:
There is only one place: Up and Running. I am partial because I work and coach from there, but really there is only one specialty store in the city. There are two locations: One on the westside: 3233 N Mesa, one on the eastside: 1475 George Dieter. Both stores hold Group Runs Tuesday Nights at 6p.m. for the public and several times a month there will be some sort of special occasion- Mardi Gras run, shoe demos, super bowl squares, etc. The westside store also has training groups throughout the year.

What to Wear:
Winter: It can be chilly in the morning but by 10 am most days shorts and a tee-shirt will cut it. Pack a gloves, hat, long sleeve and some tights on the off chance we have colder weather or you are an early morning runner.
Summer: Hot as hell. Shorts, tank, water are a must. Get out the door early. Sunscreen, hat, etc. are necessary.


Races:
There are several races you should hit up:
El Paso Marathon and Half Marathon
The marathon takes a tour of the city east to west and the half hits the highlights of downtown. There is also a 5k for those hankering for a shorter distance. All races end in the Chihuahuas baseball stadium with your triumphant tour of the bases before you hit the finish line. Great shirts and medals, a nice sized race and awesome aid stations. And usually perfect weather.


Run Internacional 10k
The details of this years race have not been worked out for this year but it will be in the fall. This 10k takes you through downtown, over the international bridge and into Juarez where you end. So you know, just getting a two country run in. You must have a passport for this race to return to the United States.

Margarita Run
This race is a hot one but super fun. It is a 5k with a significant amount of sweat as it is in the evening in July but after there is margaritas, food and music. What more could you ask for. One of my favorite races I have done here.

Helpful Websites:
Race Adventures Unlimited: great info and registration for most of the local races in town.
Visit El Paso: Great site for info on what is going on currently and things to do in town.

Looking for some awesome places to run in California?
See Cat's posts about San Fran and running around the San Fran Peninsula
See Alisyn's post about running around Placerville, CA

El Paso Travel Where to run