November 25, 2015
or more accurately the time I started a marathon and finished a half marathon. Six months ago when my friend Kelcey brought up the idea of the Philadelphia marathon I was all in. Even though I was already set to do two other marathons before Philadelphia. In the end it ended up being a bit too much marathon fun for me to handle. But I am glad I am insane and said yes because I had an awesome time with Kelcey even if it included 'only' 13.1 miles for me.

Both Kelcey and I flew into Philly around the same time Friday. After grabbing a taxi for a bit of a terrifying ride through city traffic and checking into our hotel located in the Old City we headed out to Market Street to find some dinner at Sto's Bar. The food was good but the bar was filled with loud youths so we didn't hang out long there cause I embrace my inner senior citizen and after awhile I want to shake my fist and yell at them to get off my lawn.

I guess this is what happens when you are basically a hermit back home and make a trip to the big city. Saturday we got up and headed to the race expo at the Pennsylvania Convention Center. On the way we hit up the Reading Market Terminal which is a land filled with Amish made delights, meats and cheeses and yummy things to eat.

After wandering around the market and wanting to eat/buy everything we went to the expo to grab our numbers. We wandered for a bit, got some free samples and then headed back to the market for some delicious Greek food and the buying of jams and candies. If I lived in Philly I would be at this market all time. Actually if I could just live at the market that would be ideal. We wandered around  the city for the rest of the day. Grabbed some delicious food at the German Tavern Bierstub and then early to bed.

Race day dawned chilly and we made sure to allow about an hour of time to get to the race, which was only about 2 miles away (we ubered cause too far) and get through security. Everything went pretty smoothly. This race had multiple corrals and wave starts which I very much loved after the mess of Marine Corp. There was plenty of loos, corrals were clearly marked, and it was pretty stress free overall at the start. 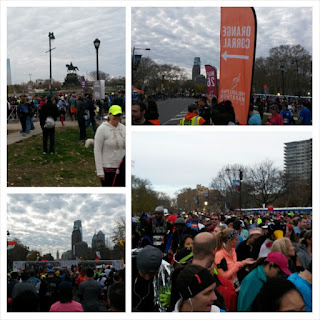 We crossed the start around 7:30, official start was around 7 a.m. This race was amazing. It never felt super crowded. There were a few hills but nothing crazy.  Running through the city was awesome. Amazing cheering crowds, fun things to look at. I loved it. Unfortunately my knee and hip did not love it as much. I was a little worried I was a bit burnt out from running the other two marathons this fall and it turned out I kinda was. I have been having a bit of IT/knee pain on and off on the left side and it started pretty early on during the race and my legs just got super tight and the idea of running many more miles feeling less than awesome was just too much for my poor burnt out brain. When we circled back to the half turn off at about 12.7 miles I told Kelcey to kick butt and headed toward the finish. 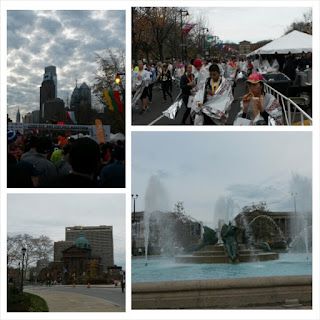 The crappiest part of quitting early was not getting to run the whole race with Kelcey. She is a ton of fun to run with and it sucked that I had to cut the fun short. I was mentally set up to go 26.2 miles so when I all the sudden was done at the finish line it was kinda weird. I was like oh that is it.....huh. Fun side note I beat the third place female marathon runner by about a minute. Yep that's right in the 2 hours and 17 minutes it took me to do the half people completed the full. Amazing!

And then I started to freeze. We had gear checked our stuff together under Kelcey's race number and the mylar blanket wasn't cutting it. I looked at finisher gear but there was no way I was gonna buy a $90 fleece pullover. Luckily I had my phone and my credit card. Since I had about 2.5 hours till Kelcey finished I went on the hunt for warmth. I found a Gap Outlet a few blocks away and purchased a sweatshirt for less than $20. Win! A lady at the store was like wow you are a marathon runner and a marathon shopper. Yes. Yes I am. Armed with discount warmth and hot chocolate I headed back to the finish line to cheer runners in till Kelcey finished. It was fun to watch at the finish line. I have never really done that. The good news is Kelcey kicked total butt at the full!! 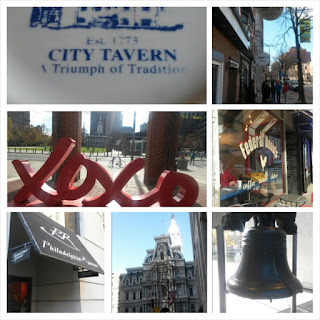 The rest of our time in Philly was spent nerding out on American History and eating. My favorite line of the trip was Kelcey saying "You can't go anywhere in this town without Ben Franklin staring at you". He was in fact everywhere, statues, busts, paintings. A visit to Independence Hall, the Liberty Bell, City Hall, stopping to eat along the way at so many great places, Federal donuts, Sabrina's Cafe (ahh a cafe just for me, you shouldn't have Philly), City Tavern for some 18th century fare, cheese steaks and of course a visit to the local running store. It was a super fun trip! Thanks Kelcey for inviting me on this awesome adventure! 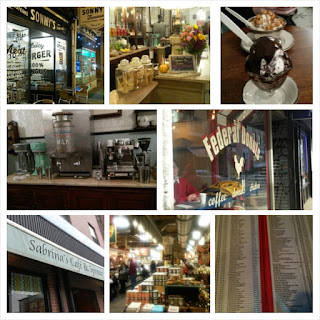 It was a bit disappointing to not finish the marathon but I didn't once regret my decision to stop when I did. It has only taken three decades but I am beginning to learn to listen to my body a bit better. I am hoping that after a few days off and some serious IT band rolling and stretching it will be fine. Looking forward to a few days of rest!
marathon Philadelphia marathon Travel