November 16, 2015
This past weekend I decided it was a good idea to run a trail race seven days before my next marathon. What could go wrong? Luckily, nothing did. I stayed upright and besides sore quads everything feels fine. Trail Running Over Texas put on the Franklin Mountain Trail Run this past Saturday. There was a 50k, half marathon, 10k and 5k distance. Luckily some common sense won out and I registered for the 10K. Thank god. This trail race was no joke. Hats off to my friend Michelle who did the half, she is one tough cookie!

Friday afternoon my friend Sarah and I headed to the packet pick-up located in a hotel conference room. Packet pick-up was small. A small Altra table was set up and some Trail Running Over Texas swag was for sale but other than that it was all business, number, timing band, race swag. The end. Easy enough. It seemed super tiny and unimpressive but I have been to two huge marathons lately so my sense of scale and appropriate size is probably a little off. I did love that we were able to pre-pay to get into the park. The park charges a $5 fee for entrance. Instead of waiting in a line race morning we could pre-pay for a dashboard pass at the expo. Way easier.

We were instructed to get to the race an hour before to allow for parking and taking the van shuttle to the start if needed. The park has several small parking lots to park in so I was parked about a mile away from the start cause I was lazy race morning and could not get my life in order to get to the race earlier. I started walking to the start cause what is one more mile and then the shuttle came by so I jumped on. I did notice a few half marathoners were late to the start but that was their own timing fault. We were warned. Parking was quick and easy and the shuttle pretty much ran all morning back and forth to the various parking areas.

I got to the start about a half hour before the start of the 10k at 7:30 a.m. Enough time to hit the loo one last time and hang out with some friends. The start was not very exciting but seemed appropriate for a trail race. Lined up at a park gate and the race director yelled go. We were off. I didn't push hard enough to get ahead of some of the slower runners. A discussion of trail etiquette might have been a good thing. Over the steepest part of the route I was stuck behind a few people who were not in a hurry and who were not interested in letting people pass. A bit frustrating. Um that is kinda what trail running is about, getting out of other peoples way.


After finally getting around the slow pokes it was pretty much smooth sailing. I probably felt better the last few miles because I was forced to move at a glacial pace in the beginning not that my pace was ever super fast. I am only so fast on the trails. The 10K was two loops, one large and one smaller, both going up and over a very steep mountainside. That picture above, yeah the runners are below that drop off coming up to the finish. Nothing says triumph like walking with your hands on your knees over the finish while gasping for breath as your quads are on fire.


After an hour and 43 minutes the torture fun was over. Though the course was tough I had a really fun time. I enjoyed the run a lot and thought the race was well organized, especially for the first year. The medals, awards, and shirts were all fun. The overall feeling of the race was very relaxed and fun. I would for sure do this race again or another race put on by this race company. I personally met the race directors and they are very nice and responsive to the runners.


Most of the fun was a lot of friends were out there and races are always more fun with friends. Everyone did so well and it was exciting to see everyone kick butt! After standing around watching others finish, eating some snacks, and watching our friend Michelle pass through doing the half it was back to the car and home for a nap. 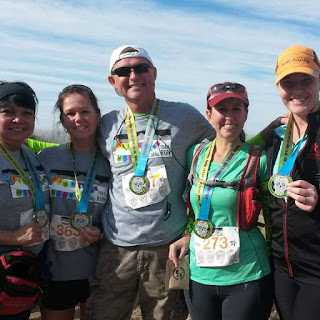 I was lucky enough to get a comped entry to the race but the mediocre performance and love of skull medals (like seriously the medal is awesome) are all mine. This race is part of the 2016 US Skyrunning schedule so if you are into 50ks and like super rocky trails check this race out next year, or if you are not insane you can pick one of the shorter distances. 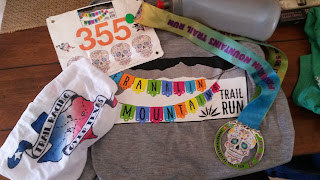 Thanks Trail Running Over Texas for a fun Saturday! Now off to Philly!!!
10K Franklin Mountains Trail Run