September 14, 2015
So all the German speakers out there can correct my google translation of 'run fast' but last Saturday night I really did try to schnell rennen at Oktoberfest. Now typical of all races that have an afternoon or evening start I was totally not into it. Couches are comfortable and air conditioning is just so dang nice. There was a moment of hesitation when I realized I had the shirt...and that seemed sufficient. But you know money was paid, plus some of my favorite people were also doing the race so I knew at the very least it would be fun to see them. 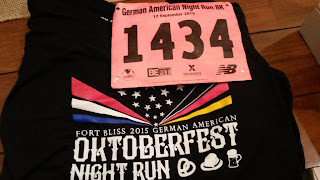 And while 4.9 miles in 90 degree heat was a bit sweaty and gross this race was pretty fun. A flat, flat course made it a bit easier to try to put in some speed but the blaring sun made it super uncomfortable. For the most part I liked the course, a big loop through base, though when the 5k split off there was a moment when I regretted my life choice of the 8k. It was hard to see them head back to the beer and brats so soon. 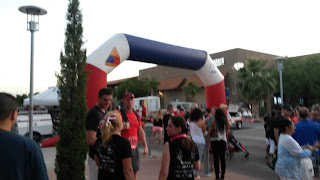 46 minutes and like half my body weight in sweat later the race was over and I was so happy to see a water bottle. I gotta say having some dudes in leather lederhosen pass you is a bit weird. And raises questions about how you clean said laderhosen after you sweat all over it. 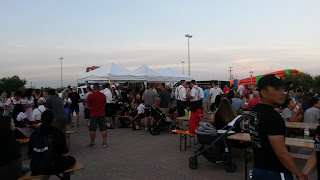 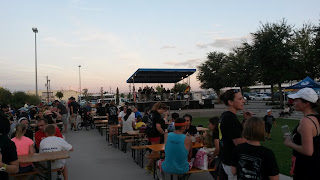 After congratulating some of my favorite running peeps on their awesomeness I wandered over to the party. As beer and bratwursts are not my thing I did not partake but did score a free red bull....so chalking that up to a caffeinated win. Overall this race was fun though super hot. I would do it again. It is fun to see the people dressed up and hear German being spoken. It is also fun to race a shorter distance other than a 5k.

Now as to why Oktoberfest is in September which I was wondering the entire time I was dying of heat stroke (and all you posting about awesome cool fall temps can suck it, not even close here in El Paso), well according to the internet to allow for better weather. Originally it was in October but then apparently someone got chilly. Warmer nights in Germany which I can only imagine are at least about twenty degrees cooler than El Paso, meant participants could spend more time enjoying the gardens ( I think gardens= heavy beer drinking). So that is why the Oktoberfest night run occurs in the soul crushing hell fire heat of El Paso in early September.