September 03, 2015
You know you are traveling with an awesome travel partner when by 10 a.m. you have had an amazing  breakfast, visited an old mining town and hit up a weirdly awesome for being in the middle of nowhere Vietnam memorial just because you can.

After our morning explorations it was time to find the rest of our relay team and get the party started.
The relay took place at the Angel Fire ski resort. The trail relays are nice in that you don't have to rent vans and drive from exchange to exchange. You just plant yourself in one place and leave for various trails from a central location. Now you do miss out on the fun of trying to park a passenger van in weird and small spaces and the amazing odor of six sweaty bodies and tons of sweaty clothes confined in a small space. But don't worry, a similar scent can be achieved in a tent. 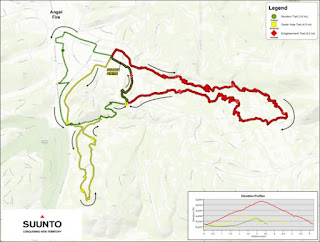 Instead of decorating the vans, Heather our team captain decorated our tent site. Our team: Tag...You're it! was made up of 8 people. Each person ran all three trail legs once solo. Well that is how it is supposed to work. Due to a rain delay several of the teams ended up doubling up in the end with two people going at the same time on the same trail to make the cut-off time. We also had an injury so one lucky person got to go on the yellow course two times. And by lucky I mean I am so, so sorry that you had to do that thigh shredding yellow loop again.

Our official start time was 1 p.m. on Friday but due to rain and lightening there was a two hour delay. That part kinda sucked because we lost a little of our momentum and enthusiasm. But once we got started our spirits picked up again.
The camping situation, while more convenient than riding in vans, also proved to be a bit annoying as we were really just camping in a dirt parking lot outside of the Angel Fire Resort. I am fine with camping. I really don't mind it. What I do mind is camping when I can see through resort windows to people warm and cozy and dry watching TV while we sit outside in all variations of temperatures and weather. If I were to do this relay again or any trail relay I would double check to make sure camping was necessary. If it is in the middle of nowhere fine I will camp. If I am right outside of a hotel room I can stay in I am totally doing that.
That being said the best part of relays is hanging out with your teammates. Which several times we got up close and personal while storms raged through. I personally got to run through very hot weather, rain and a very chilly night. So the over packing really worked out well since I wore most of what I brought.

My least favorite loop was the red loop or Red Death as I called it. Turns out running trails at 3 a.m in the dark is hard. Even with lots of lights (I used a headlamp and knuckle lights and hats off to the knuckle lights, totally worth the investment) I still had trouble with depth perception and almost ate it pretty hard a few times.
I managed to stay upright but there were some hard trips and landings going on. I only screamed twice when the most fearsome of forest creatures jumped out at me. Okay they were bunnies and they scared the crap out of me. Hey you run up a mountain in the middle of the night by yourself and not get freaked out. There were also some field mice running around that made me jump. Needless to say the red loop took me awhile. It also climbed 1200 feet in 3 miles so was more like power hiking.
The green loop was not too bad and fairly easy run. I ran that one first so I felt like I was flying. Plus it was short and the sun was up and it was not up a mountain or at least not up the mountain as far so that helped. I ran the yellow loop last and was pretty done when I started. After a fairly strong start, okay pedestrian start the yellow loop kind tore me to shreds. My legs were done from my tango with the red loop. But even though this loop was fairly steep over and over and over again, it was my favorite because I got to run with my friend Ian since we had to double up and he was doing this loop for the second time to help out our injured runner and he had only around 40 minutes earlier completed the red loop. So yeah he is a pretty good runner. So I had to kinda suck it up and get it done but there might of been a tiny bit of whining. Ian may differ a bit in the recollection of the amount of whining but I know for a fact it was a tiny bit. You don't need to ask him.

The hardest part about relays is the not sleeping and the quick turn around times on the runs. The altitude and the fact that for three weeks before I wasn't running due to my foot being stupid didn't really help the situation. Overall the team kicked butt and I am always impressed with this awesome group of people. Lack of sleep, crappy food, and bad weather can really turn a situation bad but I had a lot of fun.
I would for sure do another Ragnar Trail. It was well organized and a fun challenge. The medal is nice, the shirt is awesome. I would for sure be on a team with all of my teammates again. Though we keep saying we could just hang out without having to do some epic physical feat but then we just keep doing more of them.

If I were to do this one again I would: 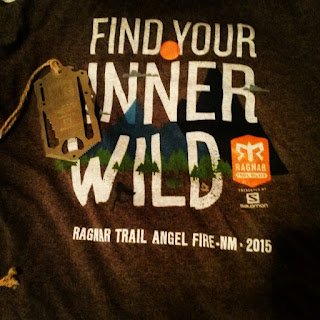