March 20, 2015
Can't really say enough good things about Vacation Races. They put on a great event. Okay all uphill was a bit of a killer over time but really not steep enough to be too much of an issue overall.

This race was one of the slowest I have done in awhile (like when I first started running) and at first felt a bit frustrated about my lack of get up and go but then just relaxed and enjoyed the fact I was in a beautiful place. Plus I knew Bataan Memorial Death March loomed a week away so pushing it on injuries seemed a bit dumb. Sure you always want to feel strong and like you are prepared for a race but after three weeks of not running much and my hip still bothering I was not killing it. Luckily a beautiful course makes extra time spent out there not really an issue. 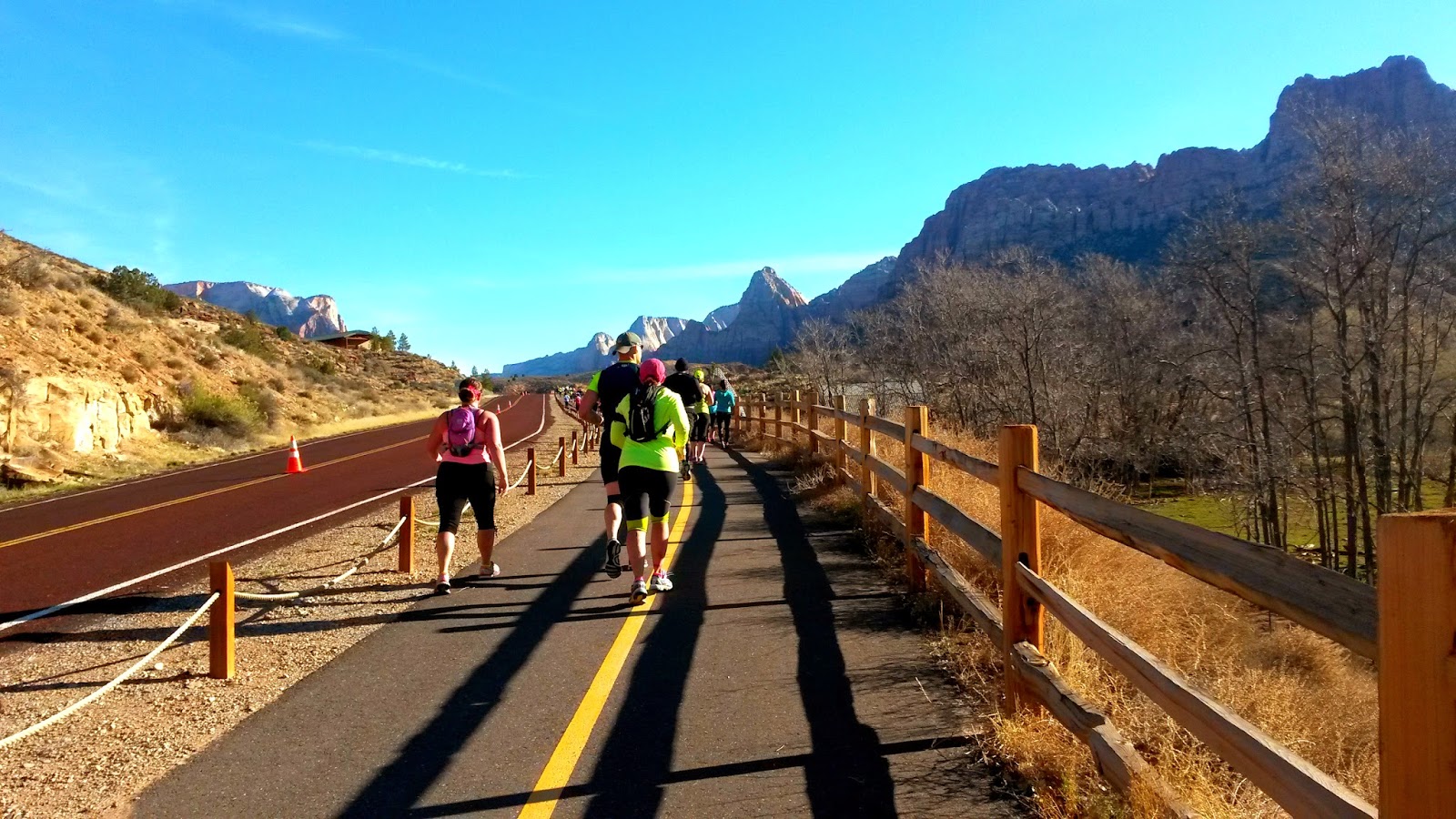 This race was not actually in Zion National Park. The start is almost exactly 13.1 miles from the entrance in Virgin, UT and the finish right outside the entrance to the park. The start had plenty of parking and shuttle buses from parking at the finish were also offered. If I were to do this again I would take the shuttle if I were to camp in the park again. With that many people getting back into the park after the race and after picking up my car took a good hour due to traffic back-up. The start was bottlenecked so the course never felt too crowded because people were strung out quite a bit. I crossed the start probably about 10 to 12 minutes after the actual start because I was in the back. Since the race took place on the shoulder of the highway this seemed like a really great way to keep people from bunching. The only suggestion would be more porta-potties at the start....isn't that the case for all races. The lines were pretty long. We were not at the start very long but it seemed like a fun atmosphere and they did offer a warming tent so getting there early like they suggested would have been comfortable. But we didn't listen and rolled up like 15 minutes before the start and that worked out just fine. 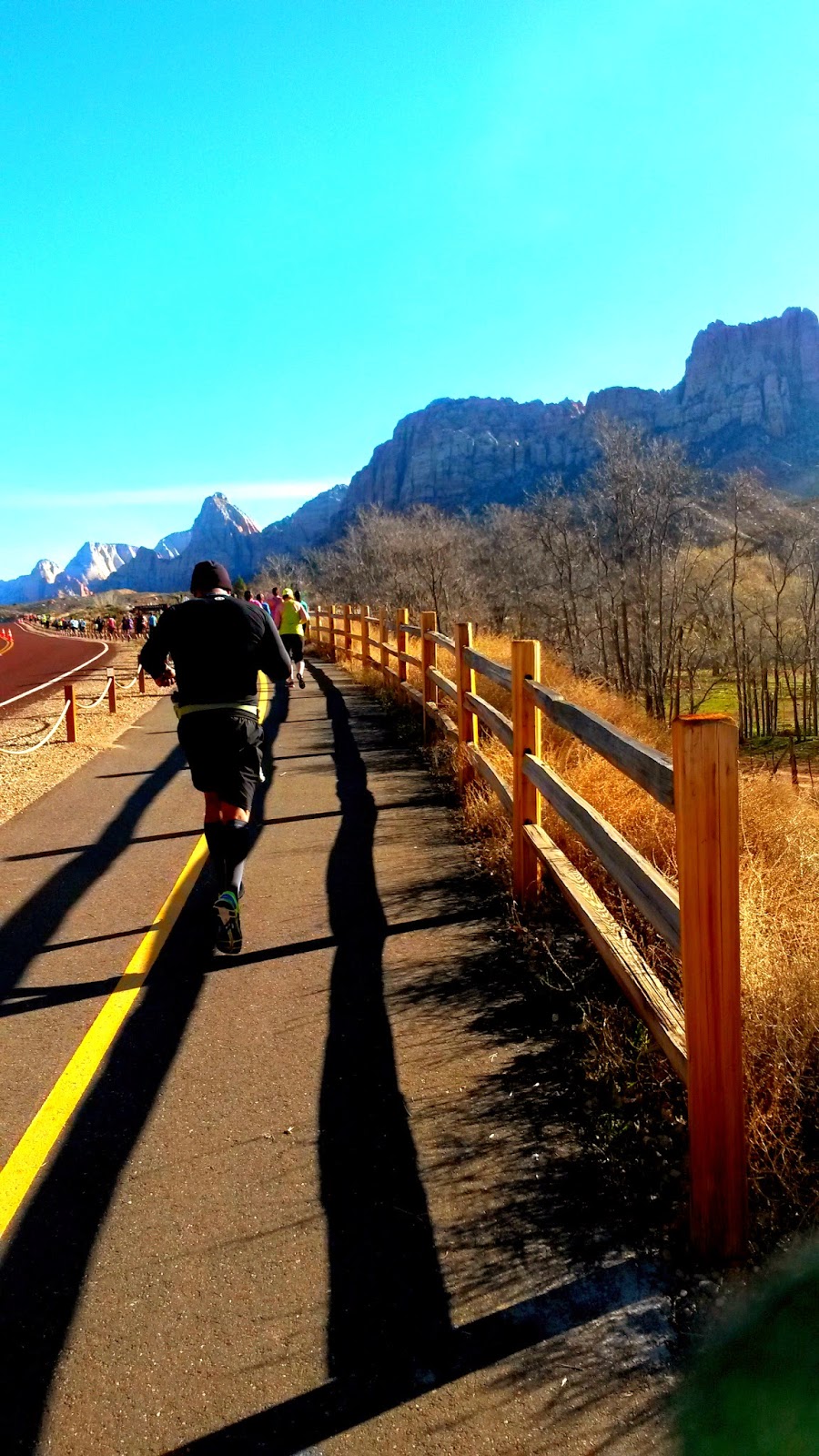 After a strong start and strong first five miles I was just done. I didn't have any energy, was ridiculously thirsty (did not do a good job the day before of staying hydrated) and the hips were just not cooperating. A few times I had to stop and stretch them out, once on the ground. Not great for timing but felt so good. Also had to stop and take some pics cause hello gorgeous. About mile 8 I just started cruising with a run, walk, stretch hip, repeat rotation until the finish. The great thing about cruising through a half marathon is that I felt pretty good at the end (well except for my hips). Finish time: 2: 29:34. 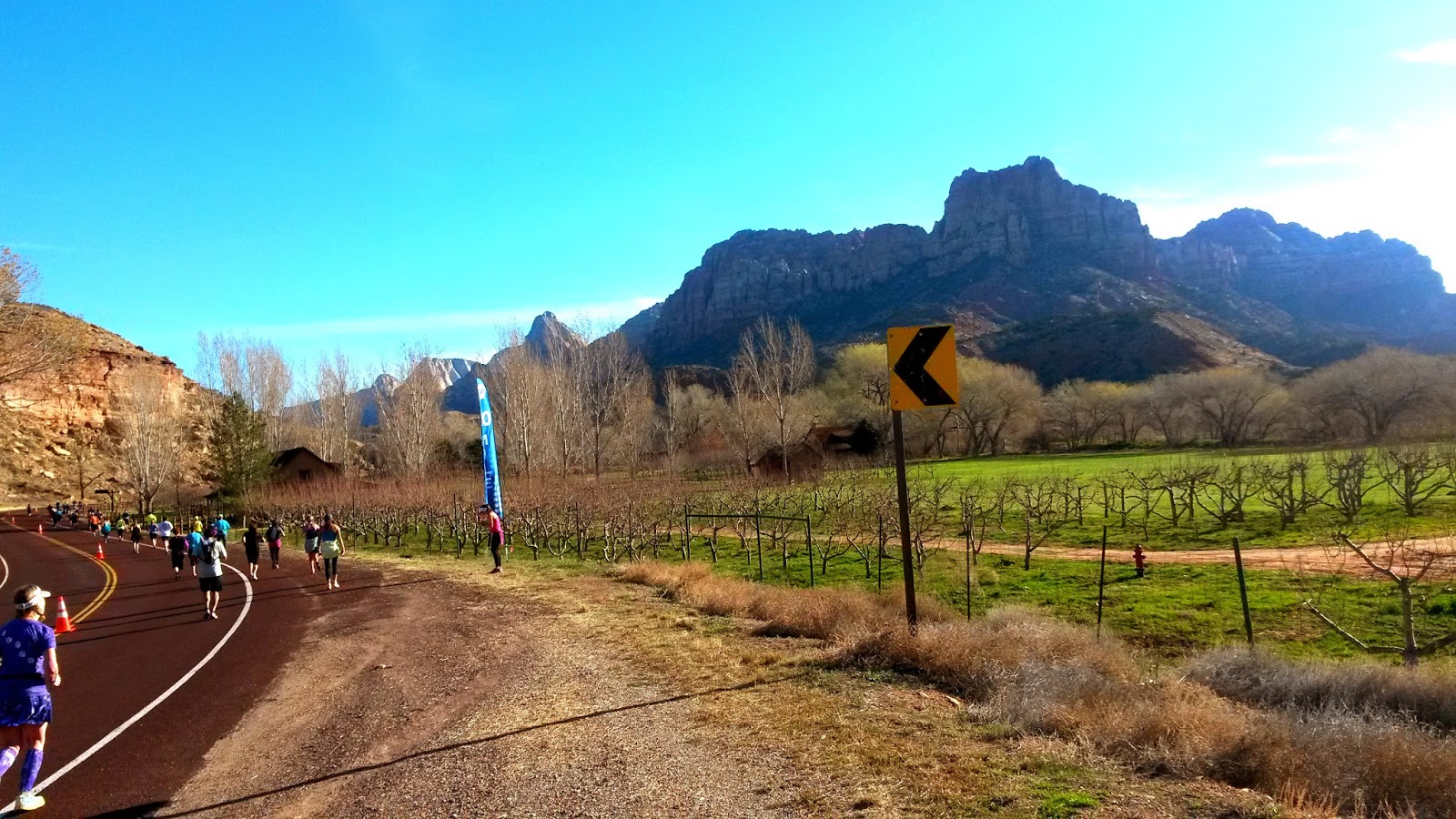 At the finish line I found my amigos, chocolate milk and a box of snacks. After stretching a bit and documenting the momentous occasion it was time for more Zion adventure time. 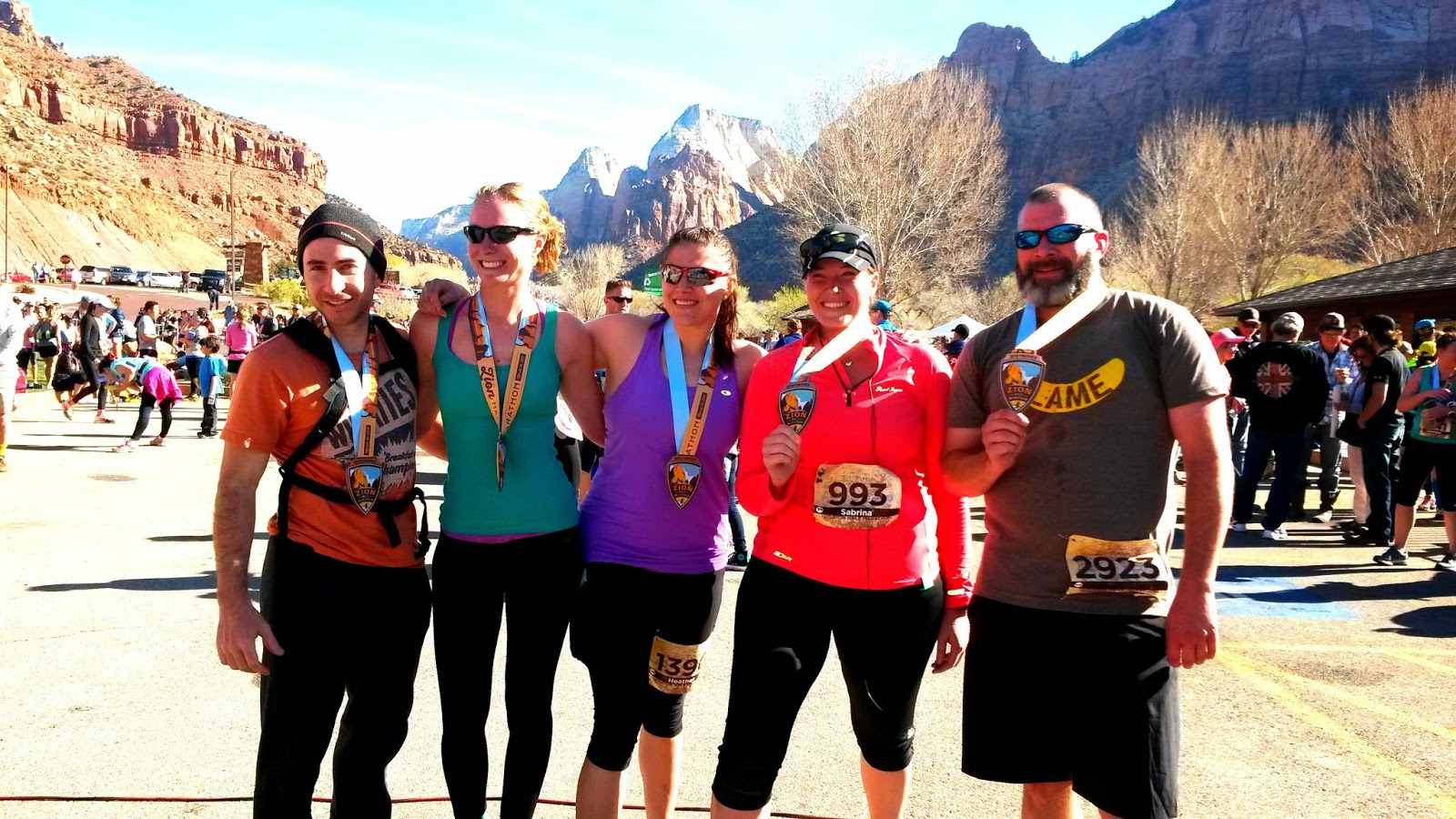 The shirt, medal and race number are top notch. Aid stations were great with water, nuun, honey stinger, bananas and oranges every three miles. Overall this was a great race and I would for sure do this one again and hope to do more of their races in the future. 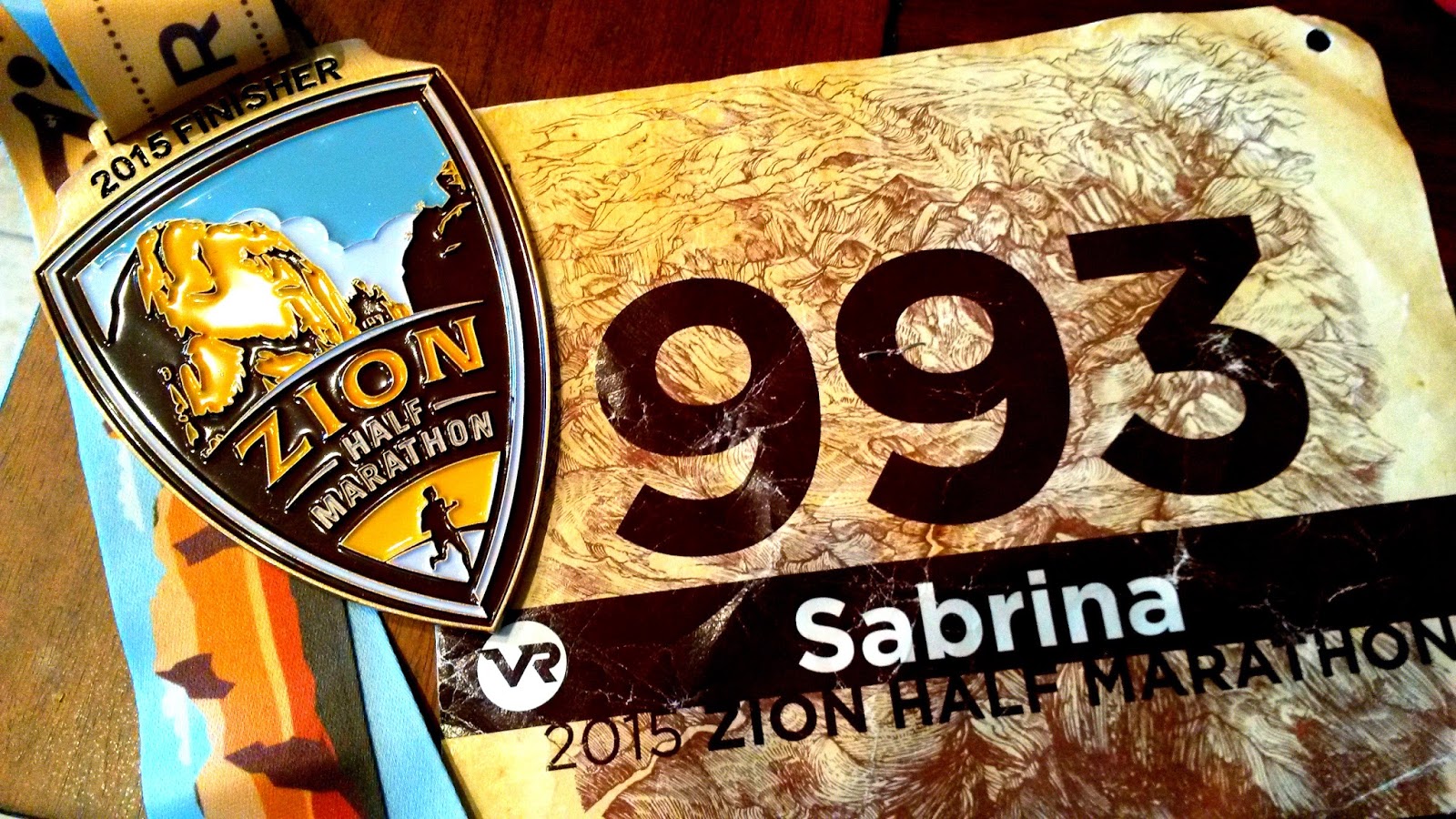