Injuries are the worst

February 17, 2015
So went to the doc to ask about my killer hip/groin pain cause I have a half marathon coming up like tomorrow and would really like to run it but I have been an idiot in the past and run through serious injuries and then ended up really, really hurt so wanted someone else to tell me it was okay to be an idiot and run on it even though it hurts.....you are welcome for this never ending sentence. Basically their best guess is I just have a killer case of adductor tendonitis most likely brought on by running a lot of hills and/or the millions of lunges and squats I have been doing. So that means yes I can run through it but it is gonna hurt. And of course the caveat of if it doesn't get better come back in. 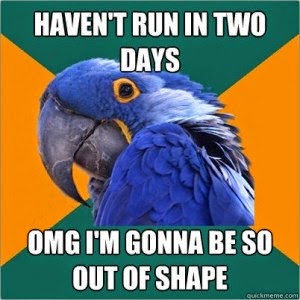 General plan is taking it easy and walking until the half this weekend and then we might be taking a few weeks off. Hello pool, hello bike, hello me going insane. But better that than muddling through the next couple of months until my hip falls off or something which is what I have done in the past. Trying to learn from my past stupidity. But it is hard. Really, really hard. 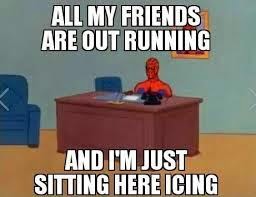 I really, really like running.....baaaahhh injuries are the worst.
injury