February 24, 2015
Not gonna lie. When I started training for this four months ago the race I ran was not what I had in mind. After many weeks of speed, tempo and long runs I was hoping to be closer to two hours or even PR. But a strained adductor derailed the PR train. This was the first half in a fairly long time. I used to just bust these babies out like every weekend but I realized on Sunday that I had not run a half since last March. Crazy. The finish line reminded me what I like about running- the excitement, everyone is happy and exhausted all at the same time, free food....medals....Mile 8 reminded me what I don't like about running. If you do half marathons or full marathons at some point it seems like a long freakin way regardless of how fit you are. Oh and also if you run with an injury you will over compensate on your other side and end up injured on both sides. Tada magic. At least I am evenly injured I guess. Yes husband of mine you were right. Running while injured is not the best idea. 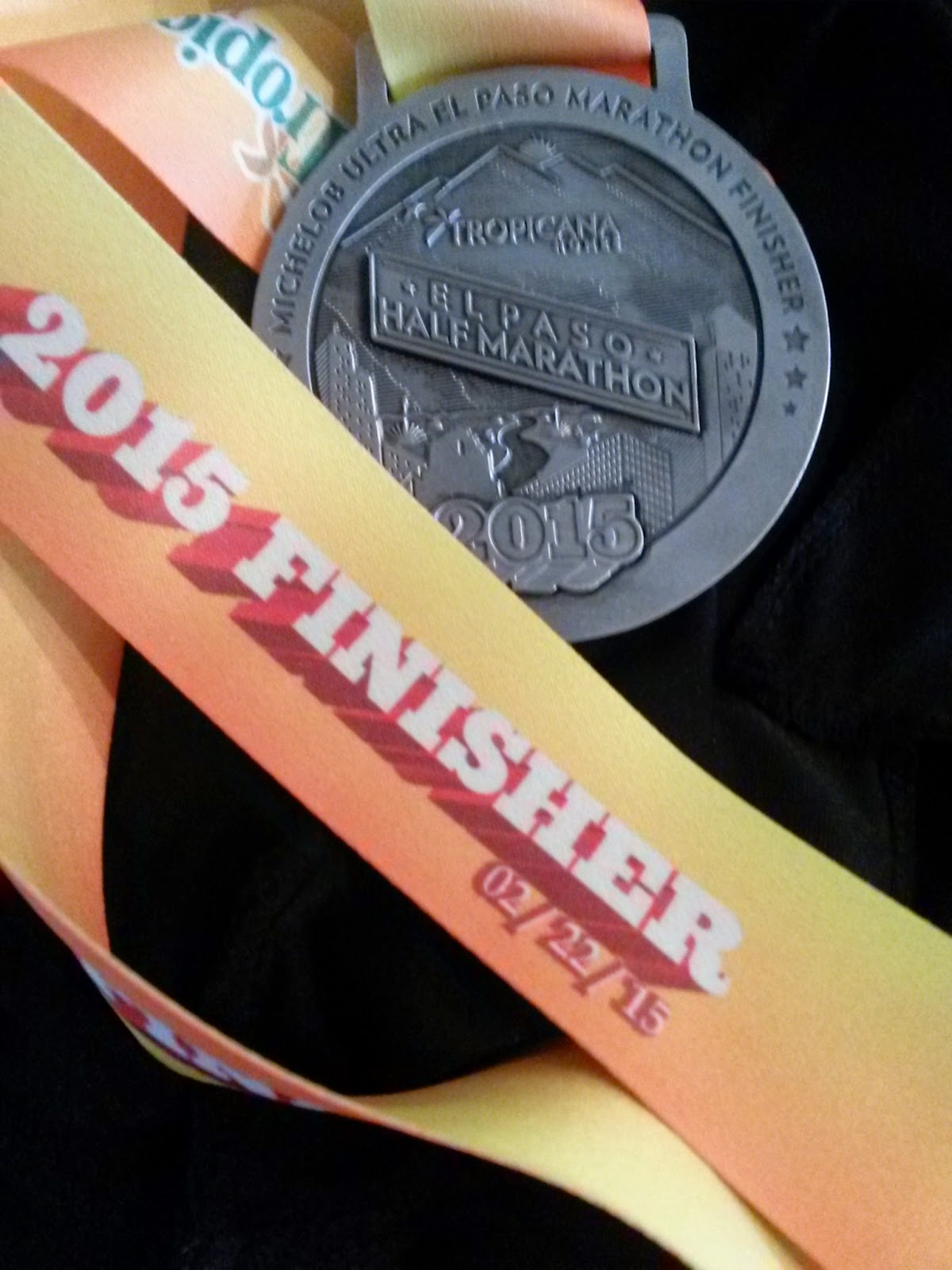 When I woke up on race day I still had a tiny bit of hope that maybe I could pull off a running miracle. Then I got out of bed and felt the pain in my leg and knew that miracles were out. Oh well. New game plan. Run strong, run with my friend Joy for the last few miles, obtain medal. Done. Done and Done. Finish time: 2:10:44.  Medals obtained: 1. Miles run with the best running buddy ever: 5. Overall not a bad day at all. 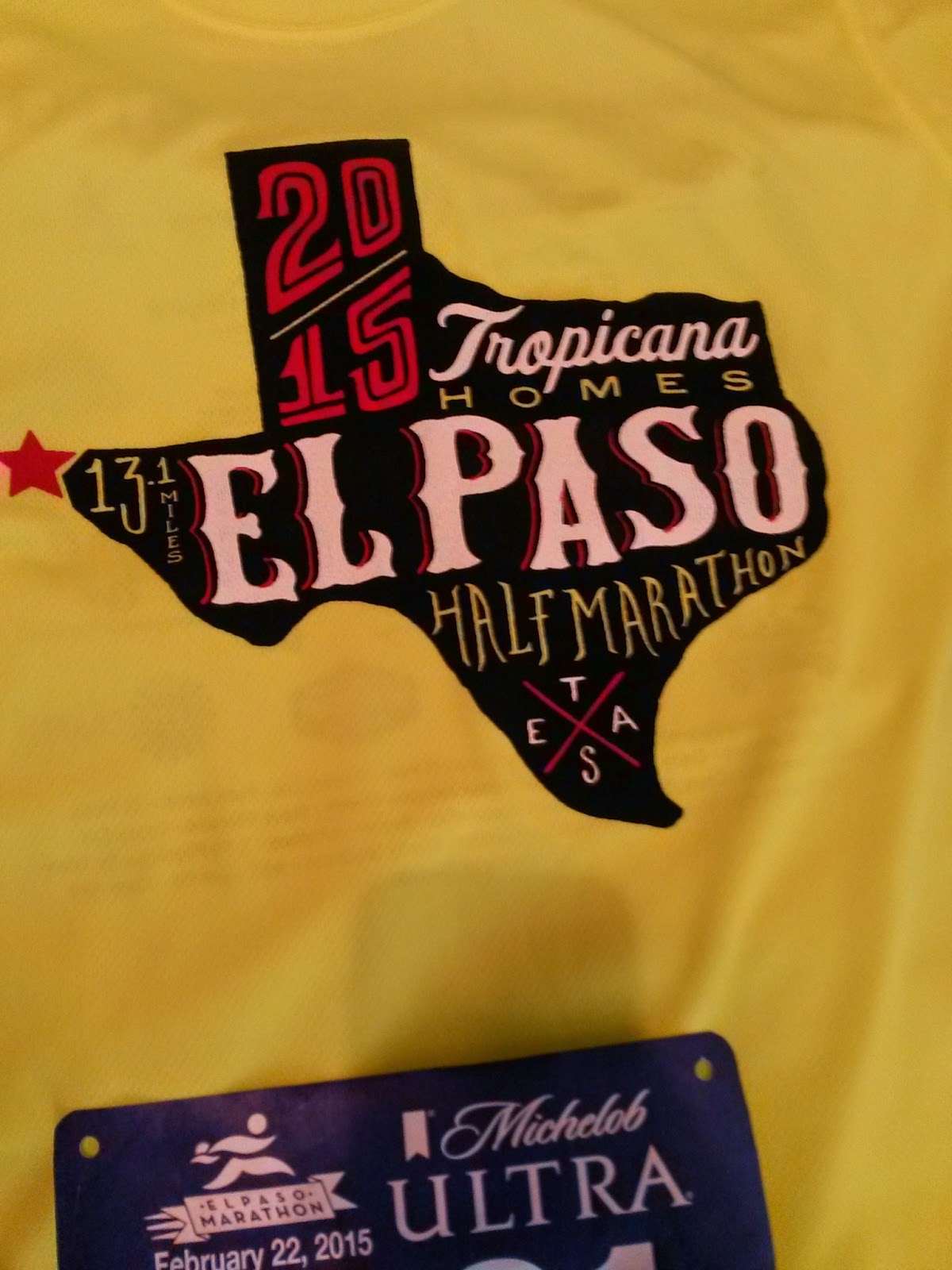 The Good:
This race is well organized. Everything from packet pick-up, to parking, to getting to the start line was easy. You start near Southwest University Park, home of the Chihuahuas baseball team and end by running around the field, the field seems bigger when you have to run around it at the end. Super fun way to end with runners being broadcast on the jumbotron as they run for the finish line. The aid stations were well done and well stocked. There is a contest for best aid station so they go all out. Minions at one, Wild west craziness at another including a guy with a whip flying around. Bands and crowds made the race more fun. Finish line had plenty of water and food for everyone. Medals are top notch. Shirts are a fun design. 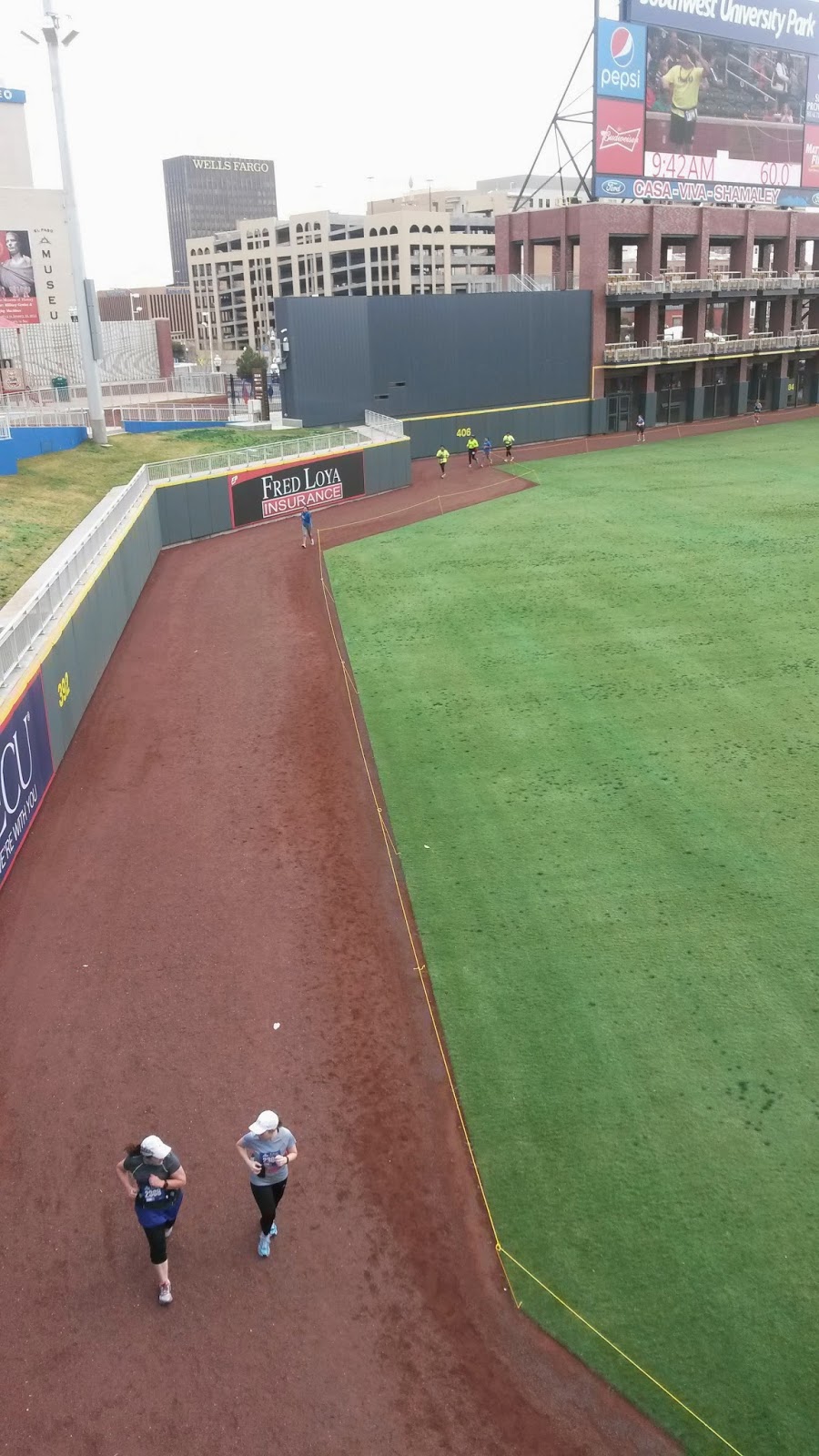 The Bad:
The course is not the most gorgeous. You run through downtown and some neighborhoods and past a giant cemetery but  there is nothing too exciting to distract you. The roads also cant the whole way which did not super help the leg situation in my case. There is one fairly significant hill about half way but other than that fairly flat. I am glad I did this half because it is my first Texas half and my current hometown half but I am not sure I would do it again. Nothing really to make it stand out for a repeat feat. 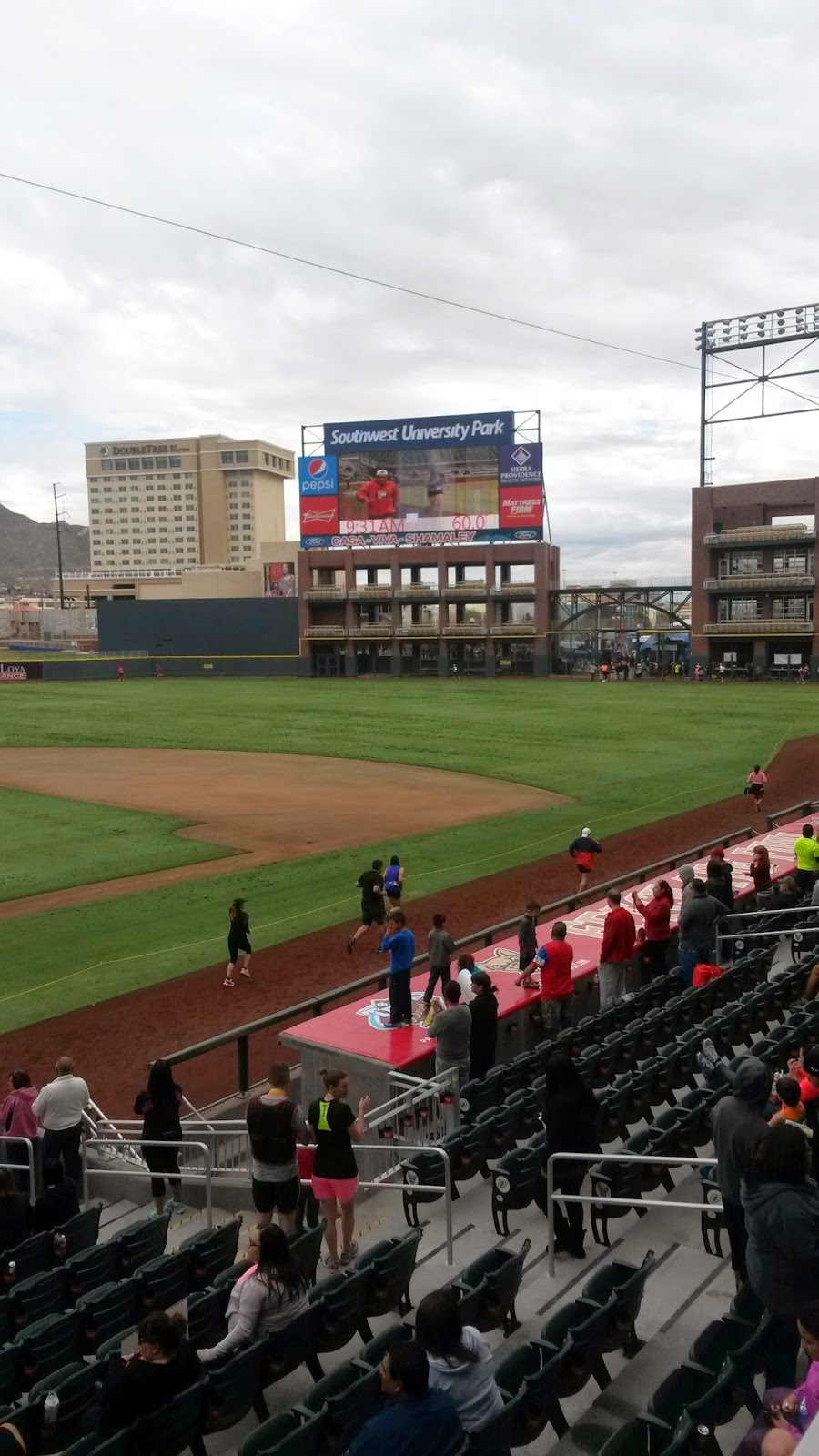 The Best:
One of the best parts of this race was being out there with the half marathoners I had trained. Some of them kicking my butt! And seeing how excited they were to complete the race. The other great thing was seeing my Couch to 5kers after they dominated the 5k! The very best thing was getting to run with my most favorite running buddy after two weeks of not running together. Because Joy is a running angel she met me about five miles from the finish to run/ limp/ stretch at every pole with me. That made it so much easier to keep it going even with my legs being like oh hell no. 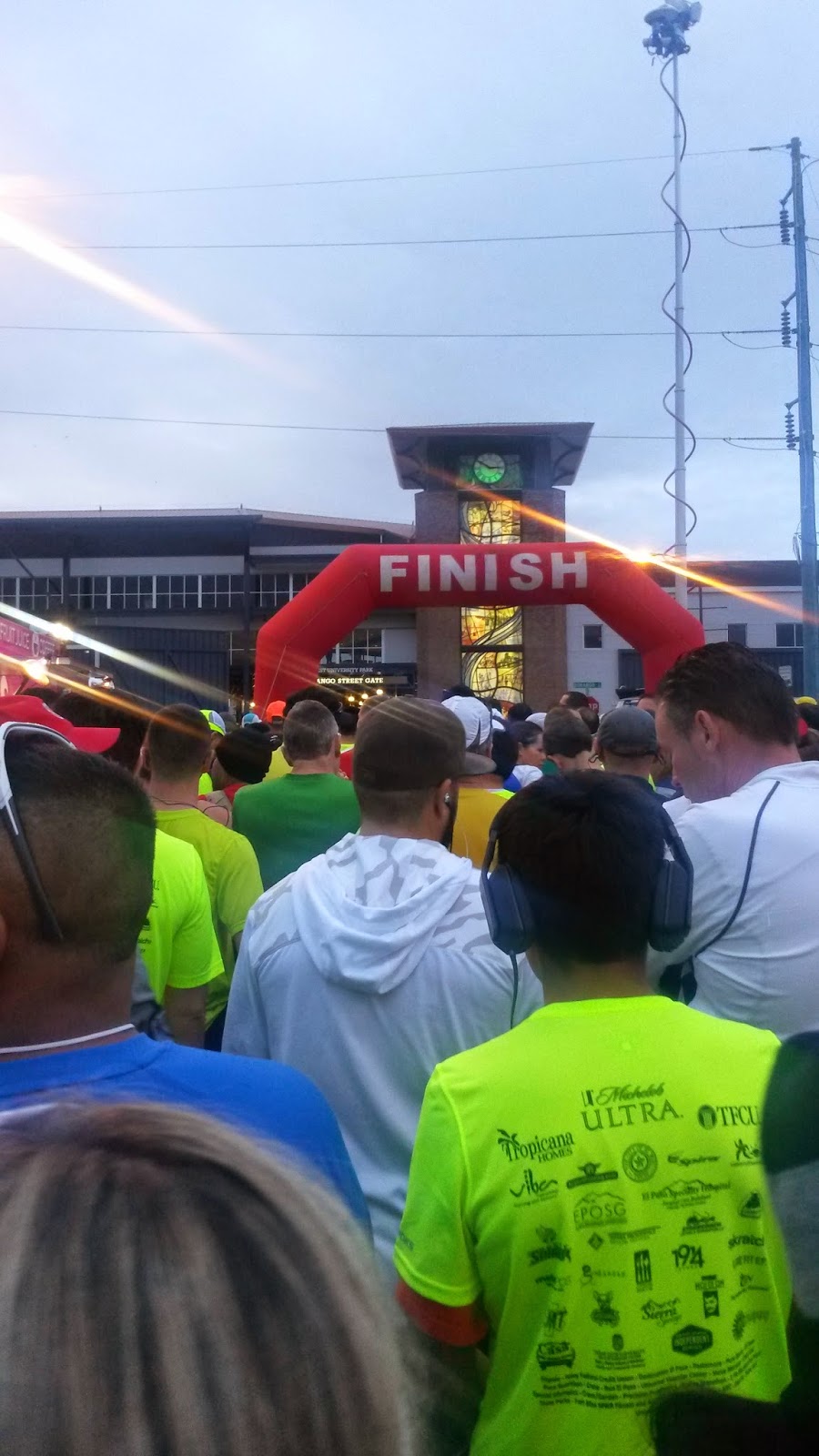 Now what:
I still believe I can get a sub 2 hour half marathon again. Not sure when I will try for that though. Next on the racing agenda is the Zion Half which is all uphill so thinking that is probably not the best time to try. Running this half reminded me that no matter how long I am out there, unless something goes horribly wrong, more often than not I really enjoy this distance and being around other runners. There is nothing like running camaraderie aka misery loves company. But before any more running goes on I have to let the adductor on my right leg and the soreness in my left hip get better. So no running for another week. Hello pool, bike and weights. Yay cross training. Immediate goal is to get better so can get back to running!