What I Talk About

September 08, 2014
If you haven't read What I Talk About When I Talk About Running  by Haruki Murakami please do! I really liked this memoir. Based on the author's training journal while preparing for the New York City Marathon it is engaging with reflections on getting older and running, and running being more than a way to stay fit. It made me think my training journal with mileage, time, and for the past two months, constant whining about the heat could be taken up a notch with some lyrical prose. 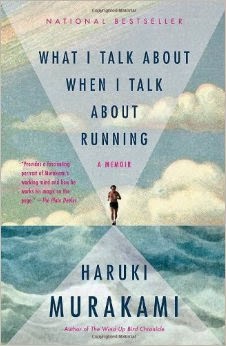 ...I don't think we should judge the value of our lives by how efficient they are (50).

Running every day is a kind of lifeline for me, so I'm not going to lay off or quit because I'm busy. If I used being busy as an excuse not to run, I'd never run again. I have only a few reasons to keep on running, and  a truckload of them to quit. All I can do is keep those few reasons nicely polished (73).

People sometimes sneer at those who run every day, claiming they'll go to any length to live longer. But I don't think that's the reason most people run. Most runners run not because they want to live longer, but because they want to live life to the fullest. If you're going to while away the years, it's far better to live them with clear goals and fully alive than in a fog, and I believe running helps you do that (83).

I'll be happy if running and I can grow old together. There may not seem to be much logic to it, but it's the life I've chosen for myself (173).

This book also made me recognize that I have gotten a bit far from running because I enjoy it and instead lately seem to solely focus on mileage and time and feeling frustrated because I am slower than I used to be. Earphones in, watch ticking mileage and time by and me totally ignoring well just about everything else. This week I will be in Colorado which always challenges me with its lack of oxygen. Seems like a perfect time to just run. So starting tomorrow no fancy gps watch for a week. No mileage, no pace. I am just gonna run until I want to turn around. Also no headphones. The horror. We will see how it goes.

It is funny just typing that makes my palms sweat a little. I am super into stats and tracking all the things. If I don't log it on dailymile, did it actually happen??? I have two gps watches cause one just wasn't enough (to be clear I don't wear them together- fashion faux pas). But when I think about when I first started to run in high school I had nothing but a sports watch to tell me the time with a simple timer function to make sure I got my butt back before it was time for school. I would run when it was dark and cold and the world seemed empty and I loved it. Some days I would see how far I could go before I was pushing the edge of being late for school. Other times I would just cruise around after school until I wanted a snack. At cross country practice we would just run until told to turn around. Now I let the watch dictate how I feel. What was my average pace? Was it better than last week? No, ugh most horrible run in the history of all runs. It has been awhile since the only feedback was hey, that was a fun run. And since right now I am trying to build a strong base and improve my fitness ,seems like a great time to just wing it.


Here's to winging it....we will see how long it lasts.