August 26, 2014
Settle in. This recap is a long one.
Where to even begin? Relays almost feel like a wedding. You spend months preparing and thinking about it, getting the right outfits, finding transportation, travel arrangements, lodging and then in a flash it is over and you are left exhausted with a vague memory of awkward dancing that may have occurred around 3 a.m. without alcohol as an excuse.

On Thursday I headed to Portland to meet my Hood to Coast team- Hey, Wait for Me! After getting delayed in Las Vegas due to a late flight arriving, a missing air stewardess, the wrong paperwork and a storm (seriously I am not sure anything else could have gone wrong) and much panicking on my part wondering what would happen if I couldn't get there I finally arrived to be greeted by my friend Katie with my own personalized sign. Fancy! We even had enough time to hit up the Portland Running Company pre-team dinner so I could hand over all my money in exchange for much needed long sleeve swag and a hoodie......because I live in the desert.....fingers crossed for cold weather soonish. 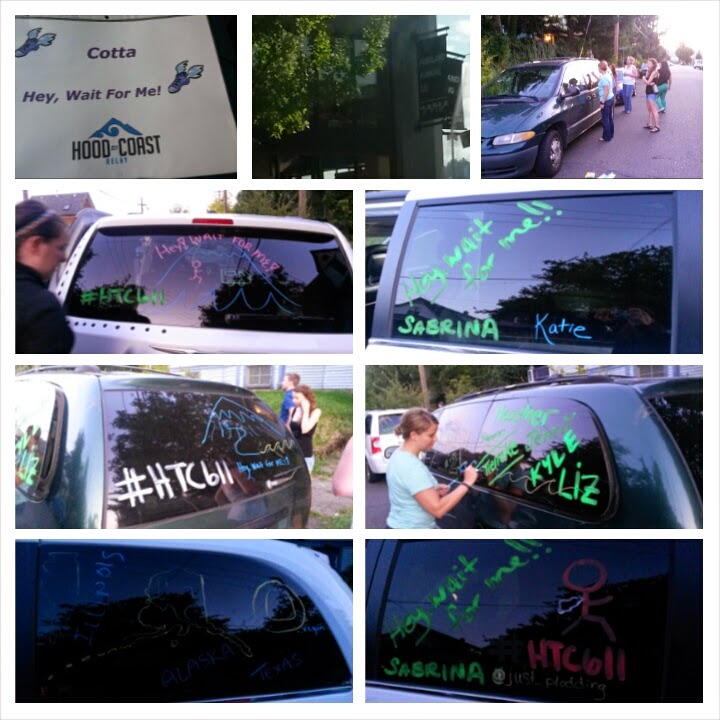 After stuffing our face with pre-relay fuel which our team captain Rachel was nice enough to cook for us, we did the all important van decorating. I only knew one person, Katie, a friend from grad school who I haven't seen in several years, so I was a bit nervous about meeting everyone else. Luckily they were awesome! But that brings me to one of the things I was not overly fond of about this relay- It is huge, like 1000+ teams huge and due to the size there are a lot of rules including strict rules on where van 1 and van 2 can be at at any given time. This meant that we didn't really see each other except at the major exchanges. The other relays I liked that at times (now not all the time- people like to sleep and eat) both vans could hang out together. Basically everyone in Van 1 seemed really cool and I wish we got to hang out more. They were also really fast. In my mind they were the Beast Van. 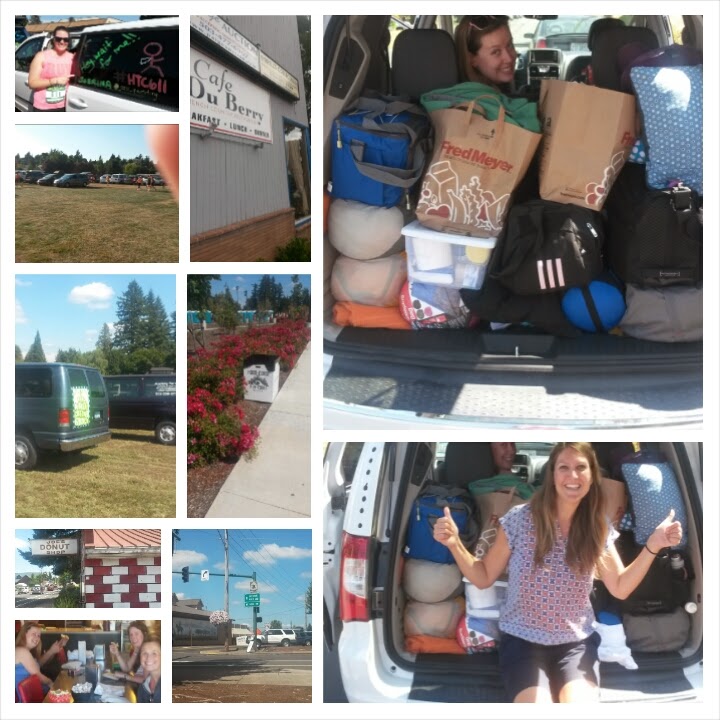 But the upside of all these rules and being Van 2 is that we slept in till like 8 and got a leisurely breakfast at Cafe Du Berry (I got a scallop omelet which was luckily not a mistake. Nothing like starting out a relay with a seafood breakfast) and is delicious. Then around noon we packed the van and headed to the first major exchange to take over but first stopped for donuts cause our van.....was not the Beast van. Because Beast van was so speedy our start time wasn't until around 10 a.m. Starting that late just seemed so weird to me as I am used to going first....due to my moderate level of running ability. 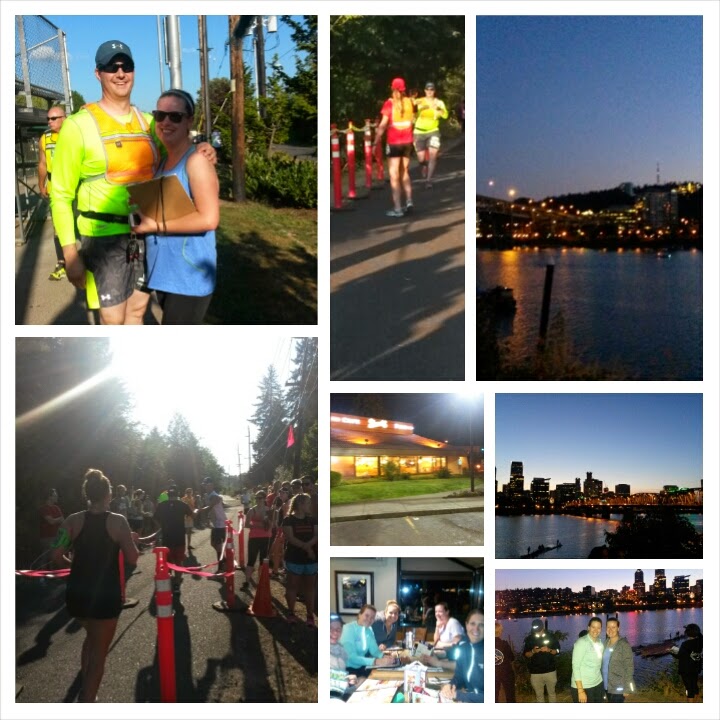 Once we got the fancy slap bracelet we were off and running during the hottest part of the day. Everyone was either running faster or right around where predicted so we were killing it. My first leg I ran an average of 9:44 min/mile, kind of unheard of for me these days, even though it was hot and hilly. Felt pretty good about that. The best part is always seeing your teammate for the hand-off. This time I actually passed people about 4 to 5 each leg which again is kind of unheard of for me. After Van 2 finished we headed for food and sleep. Rachel's boyfriend's parents were nice enough to let us invade their home for showers and naps but due to Beast van being Beast van we got about 20 minutes of rest before we had to head out but at least we were clean. 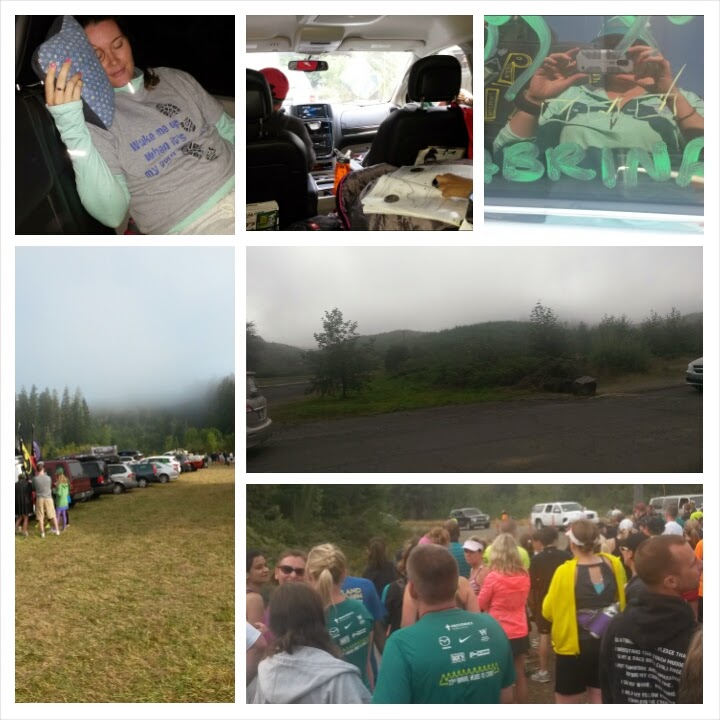 Then we ran through the night. Starting around 2 a.m. I think until the sun came up. My middle leg was uphill and dusty. Not gonna lie I strongly disliked that leg (read- threw a mini shit fit when I was done) due to the amount of dust (you are recommended to wear a bandanna). It is hard and you can't breath and you get dirt in your eyes, your teeth, your nose, your ears.....you get the idea, due to vans kicking up dust as they drive by. This is also where we started to get into a traffic jam.

For some reason all the teams started to bunch up starting around this time. And the traffic jam continued until pretty much the end. While everyone hates traffic, when traffic is preventing you from resting/sleeping/picking up your runner/ making you run extra miles to the exchange so you can keep moving forward it becomes rage inducing. A couple teams I talked with after said that the traffic jam delayed them by several hours. At least we were able to keep moving forward....though there was an incident where I ran almost a mile carrying a sleeping bag, dressed in sweats with no sports bra- wasn't expecting this to happen and hadn't finished changing- to get one of our runners to the exchange (I had to carry the sacred clipboard to track times). This traffic issue was a major complaint and due to this obvious fail in planning and logistics would make me think twice before doing this relay again. Relays are supposed to be fun not super stressful oh my god we are never gonna get there, ahhhhhh. 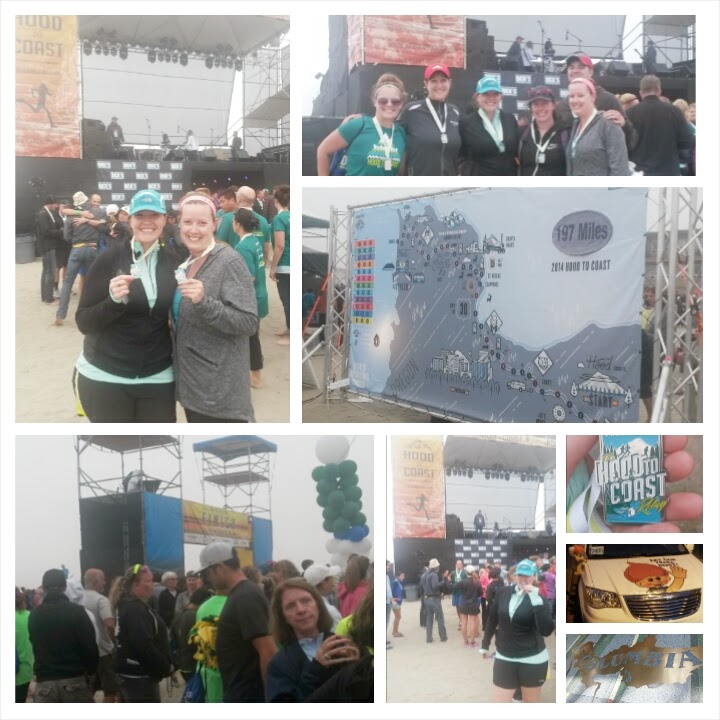 Our third legs were during the heat of the day again, except for the last two, as you got closer to the coast it got cooler. And then we were in Seaside, but due to some bad navigation (my bad) and parking confusion, finish line uncertainty we ended up running the last mile or so with our runner kind of in a panic (this time there was a bra but dressed in sandals) to make sure we could cross the finish line. I guess in prior years the whole team had to be present to cross, this year you only needed the final runner to cross so our panic was unnecessary. Just a nice little cool down mile for Van 2. At the beach we met up with Beast Van and were cued to run through the finish again as a team, handed some medals and released to party....except at this point Van 2 was kind of fed up with the whole thing after sitting in hours of traffic and Van 1 had been there forever and we were all kind of tired. So high fives all around, took some pictures and headed out.

I am in a glass case of emotion when it comes to this race (I had to, there were just so many Will Ferrell quotes happening in the van I had to put one here). There are some definite issues with this relay. I feel the size of the event may have grown to big for the roads/exchanges to handle all the people/teams and that a serious transportation overhaul needs to be looked into. Overall I am excited I got to do this relay and had a great time. Thank you to Rachel for inviting me to be on the team. Thank you to Katie and Erik for the transportation and general awesomeness! Thanks to the whole team for being amazing and I had so much fun getting to know you!