June 13, 2014
I went into this race a little bit naive. We had done the math. We ran the marathon in hilly Atlanta in around five hours and had walked up a lot of the hills. So add an hour for increased difficulty of trails and even more hills. And then add another hour for heat and humidity and bam we should finish around 7 or 7.5 hours. No problem.

Reality- I crawled through at 9 hours and 27 minutes the second to last person to meet the cutoff (a few poor people did not make the cutoff). For a good chunk of time I thought I would hold the coveted spot of last person to finish. Even had the blog title going in my head- Rockin Choccolocco- the time I finished last. But as they say, you never finish last and there happened to be one poor gentleman out there having an even worse day than I was. 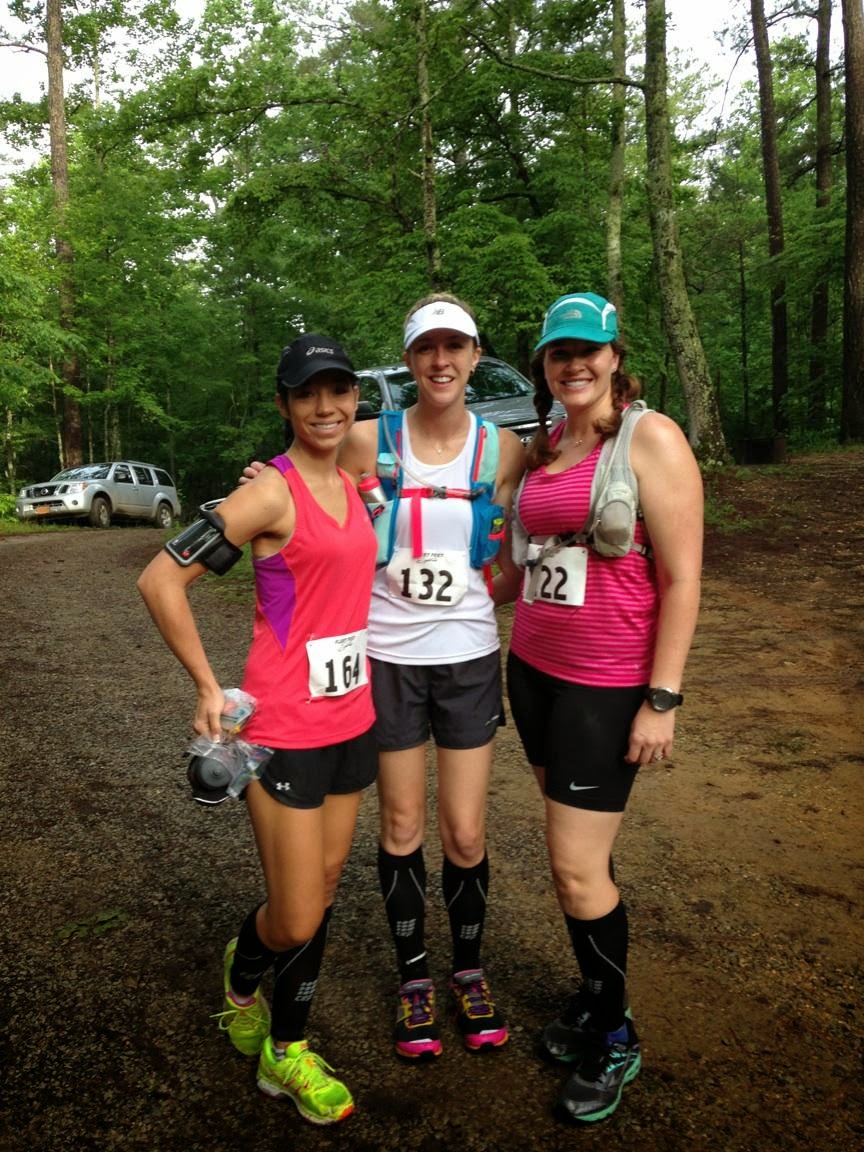 I should have known that this race was not a good idea. But for some reason I think I am invincible and can do anything. Well this race was a real slap in the face that I am in fact not invincible. Now if I am going to suffer for 9.5 hours can't think of two other people that I would want by my side and Nicole and Kelcey were good sports for signing up for this race with me and sticking with me to the bitter end even though they would have been way more successful if they had ditched me. I am grateful that they did not.

The weather that day was 87 degrees and pretty dang humid. When we started I was excited and for about the first ten miles and it was fun. This trail, though described as beginner friendly, is of a pretty high difficulty rating. Steep drop offs, roots, rocks, steep climbs and descents. If this is beginner than I am not sure I want to ever go beyond that. It is very pretty out there. Very green. The one thing that had us freaked out starting at packet pick-up the day before was the bugs. The race director mentioned ticks, lots of ticks. So in my mind I was silent screaming from that point on any time anything touched me. We doused ourselves, our clothes, hats, everything with heavy duty bug spray. That seemed to work. I found a tick in my shoe at the end but nothing attached. Getting out to the race start is a haul on a rough road. If you feel lost and like you are never going to get there you are going the right way. 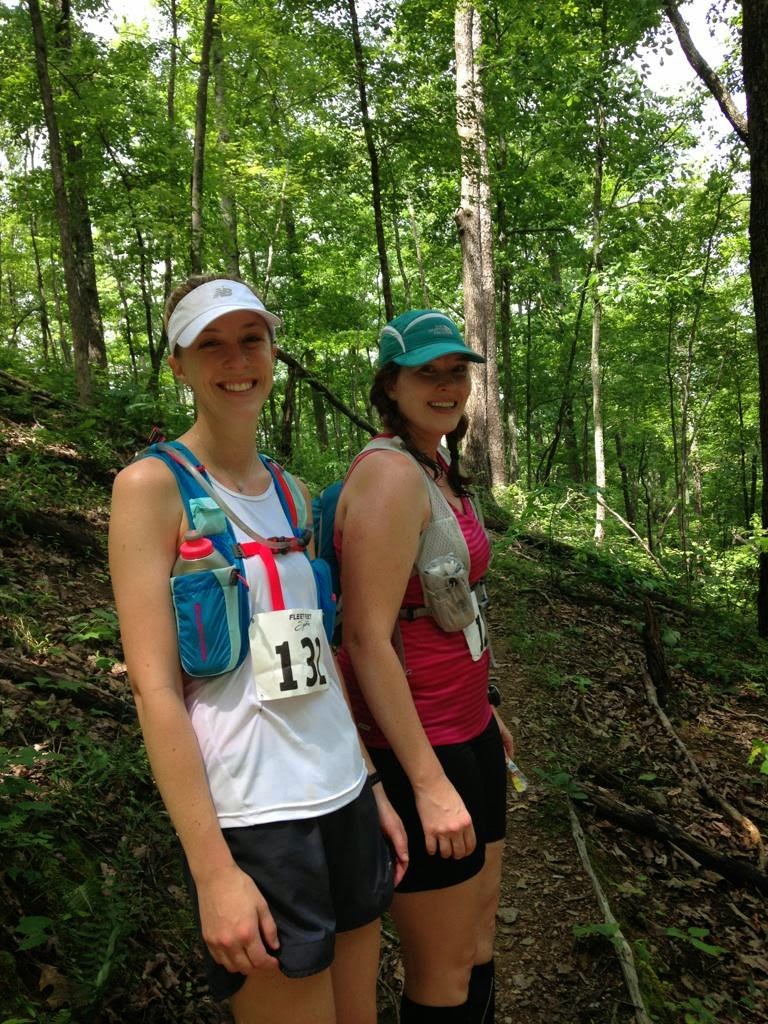 Okay the nitty gritty- After about the first ten miles I started to notice that I could not keep up. Even though I was giving it my all. I would try and try and try and it was just no good I kept lagging behind. I also started to get really hot. Sweat pouring off hot though Kelcey and Nicole were not affected by the heat as much so that was a little weird. After a while I started to notice my chest felt tight and even walking I could not catch my breath. My body felt like it was sprinting but I was going as slow as molasses. I also got stomach cramps/ nauseous, my heart was pounding in my head and I just felt freakin weird/sick. At the turn around point I got a big mental boost and we stopped for a few minutes to refuel and when we started back out I was like okay I can do this. I was over half way and I really wanted to finish. But things did not get better on the way back. I felt worse and worse over time.

Important detail- I have been diagnosed with an irregular heart beat and an enlarged/ damaged heart (the doctor's have never been able to figure out why either of these things is going on though there is always much concern that this is present in someone so young/ healthy yet no one has been able to figure out what is up). What this does mean is that I am at a higher risk for my heart getting out of whack and not being able to get in whack= heart attack and strokes. I have been told to pay attention to this and be aware that it is a risk factor but never outright told to be careful, though I guess it was probably implied. Well now I have been told outright but more on that later.

Okay so I was feeling like death on a death march through the heat of hell- bit dramatic? Anyways I felt like crap and was becoming a little concerned that something was seriously wrong when we got to one of the main aid stations I seriously considered stopping. Just throwing in the towel. Screw this race, it had broken my spirit, my body and it felt like all my toes from hitting every rock and root. But I was with my running best friends and I didn't want to quite. I wanted to freakin finish at least one 50K that I had started.

Looking back I should have stopped. It was stupid to keep going. I felt very bad and I put myself at risk and could have put my friends in a really bad spot if I had collapsed or something. For miles on that trail you are in the middle of nowhere. You can only walk in or out and if I had passed out or something it is a long way to help. Let alone getting any sort of emergency vehicle out there would have taken way too long. Luckily, though I got chills (sign of heat sickness), tasted metal the last few miles (I have no idea why this happened, any ideas?) and got super whiny, we finally crossed the finish. The kind of sad part was I wasn't even excited to finish I was just relieved that I wasn't gonna freakin die out on this shitty trail. 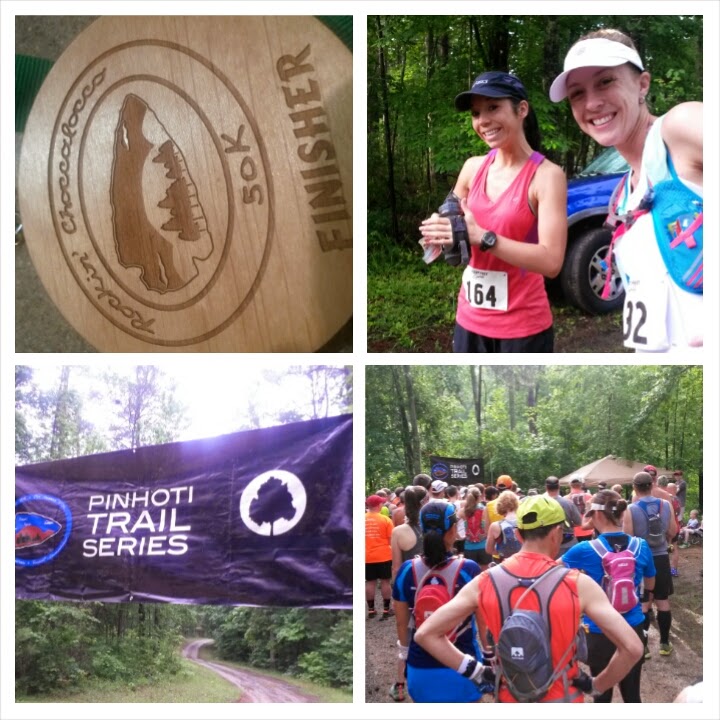 By the time we finished the BBQ was long over and no one was around anymore except the race director and their family and volunteers. So we checked ourselves for ticks and hit the road back home. When I got home I went straight to bed after drinking some Ceralyte. I wasn't thirsty. I had had lots of electrolytes and water on the course but figured that is what was wrong. When I woke up the next day I felt okay. My legs were not sore at all though my feet hurt. I took Max out and started to pack things up because the movers were coming the next day. And then I started to notice my chest was super tight and I felt like I couldn't breath very well and got dizzy and did not feel well at all....so I decided to head to the ER (being Sunday and on the Army insurance that was really my only choice or wait it out until we got to El Paso) just to be sure it wasn't my heart. The husband was visiting friends in Birmingham so I was on my own.....