April 29, 2014
The thing about relays is that they just keep happening. Leg after leg. There is a sense of once one of your legs is done there is the immediate pressure of the next leg looming ahead. Now this particular feeling occurred more often for our team due to the fact their was only 8 of us instead of 12. This meant that several of us had five legs to complete and around 30 miles. I think in the end this probably slowed us down. It is hard to fight the fatigue especially with little to no sleep.

Even with the pressure of the next looming leg it was always exciting to see our runner charging up to the exchange for the hand-off. My teammates may disagree but I think in the end the exchanges were an area we could have done a bit better.
In the beginning we were really good at being ready for the runner coming in with the next runner ready to go.
But as the hours and exchanges went by and especially at night the time we spent at exchanges seemed to increase a bit. In part this was due to the night legs being so dark and run through the wilderness. The van would follow behind the runner making it difficult for the next runner to be ready to go at the next exchange.  With eleven legs being in the dark any sort of lingering probably added up. I think this is probably something to just be aware of for any future relay adventures.
The night legs were darker and a bit scarier than we expected. One factor we were not prepared for were dogs. Much of the course was through rural homes that had dogs left loose outside. Kelcey was followed by a large dog that charged after her and scared us enough we made her get in the van and drove up awhile before letting her out during her leg.


Mary had a pitbull that was very interested in her. I jumped out with a massage stick ready to beat it off (this is not a recommended course of action and looking back probably really really dumb but I was just like oh hell no you are not eating one of my runners. I got pretty mad about the whole dog thing.) the whole time the owner just watched from their front window. Hello get your dog! And I had a dog charge down a driveway at me and scare me so bad I sprayed mace at it while yelling NO. That seemed to deter it. 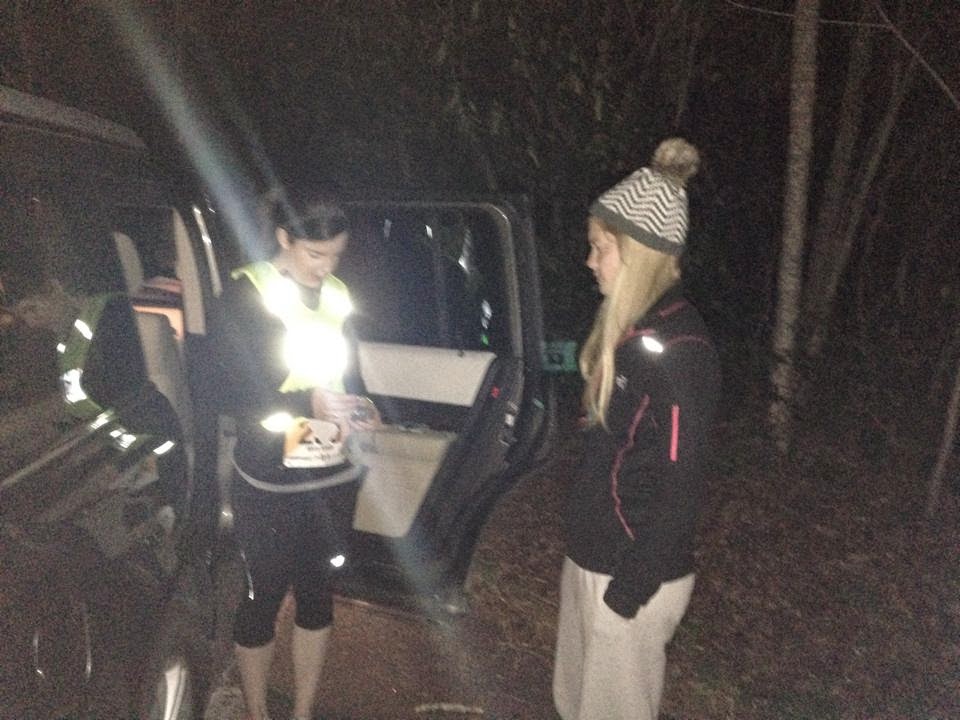 The fact that you could hear dogs barking and not know how close they were or if they were coming up behind you made the night legs pretty tense. But we did seem to run faster. Once we got into more rural areas this threat was gone but then you know we were in the wilderness so that was a bit spooky too.

Another factor we did not consider and were not prepared for was car sickness. The roads were mountain roads and very steep with switchbacks. Car sickness inducing switchbacks. When I jumped out for my second leg I was pretty sick to my stomach and dry heaved a few times while running up the mountain. But you know puke and rally I guess. I think this was the leg that I was like yep I am pretty tough- four miles pretty much straight up a mountain while trying not to puke-mentally I think we all learned that we are capable of more than we ever thought.
Overall the legs were challenging and beautiful and every time you completed one you felt like a beast because no leg was really that easy, even the ones labelled easy. I was constantly inspired by my teammates and their ability to just rock the heck out of every leg. It was fun to hang in the van and laugh about random and crazy stuff. At first the snacks we had brought were fun to munch on...but after awhile you were kind of over that situation. Next time we are bringing more real food and less candy and snack items. Even Swedish fish become unappealing after 26 or so hours. I didn't think that was possible.

Even with everyone pushing as hard as they could when morning came on Saturday we realized we were running out of time....
SMR SMR. Good Girls Gone Trail