March 03, 2014
First things first....NEW PR. Yeah Baby. A double digit PR at that. I will take it. Official time 4:28:59. Not my A goal but I am proud of what I did that day and feel I gave everything I had to give on that day. I thought I might wake up the day after or today and feel like I could have done more. But nope still super excited about my new PR!

When I crossed the finish line the first words out of my mouth as I stood hunched over with my hands on my knees was "God I hate marathons". I do. I really, really do. But I also love them. I think because, using the words of first time marathoner Patrice, it never fails to serve up a nice big piece of humble pie at some point. 26.2 miles is a long freaking way and I don't think running a marathon will ever be a walk in the park for me. I always have a point somewhere along the course where I regret the very poor life choice I made to run a marathon. But then I finish and there is really nothing like the feeling of finishing a marathon for me, probably because that distance is so difficult for me. I also really love seeing other people finish.

Race Details:
Course- nice and flat. Many BQers at this race. Some tiny rolling hills and maybe two larger hills but nothing very significant at all. The best parts of the course are the very beginning when you run through Albany State and the last few miles where you run through some nice neighborhoods and a nice park. I wish I had paid more attention to my surroundings the last few miles. But it was more like huh that is pretty....oh god I think I might die...stare at road.

Course support- AWESOME! Volunteers along the course were great. There was plenty of aid stations...about every two miles with water and Gatorade and in the last half there were bananas and maybe oranges every now and then and hammer gels and snickers marathon bars. There were not many people along the course but the aid stations had plenty of awesome people cheering.

The finish line- eh. There were bottles of water and a first aid tent and some bananas and stuff. To be fair I felt sick from mile 14 on so when I finished food was the last thing on my mind so I may have missed it but it seemed to me that all the stuff- like the BBQ cart were shut down by the time we finished. I mean come on we were about middle of the pack of the marathoners. That did not seem fair. The finish line was also at the bottom of a massive hill that we had to walk up to get back to the cars.....what...oh god why. That just seemed cruel.

Overall impression:
This is a nice race. Good course to PR on and well organized and smaller race so you never feel too crowded. Not sure I would do it again but am glad I did it.


What went well- I feel a lot stronger in running the marathon than I did when I ran them in the fall. 2 1/2 months of hard training paid off.....and also made me curious if I had more months of hard training what I  could do....you see the vicious cycle right?!?! The biggest difference I feel is less during the marathon...there is always a point where it becomes mind over matter with me because it just freakin hurts to go that far (love/freakin hate relationship- it can't be healthy)....but after. I felt a lot better after this marathon than I have felt after others and I obviously ran harder so I see that as I sign I am getting stronger. I even was able to run two miles the day after...that wasn't supposed to happen but Kena is a smooth talker...take someone a snack while they are doing an insanely long run and next thing you know you are running along.

What went not so great- I got sick to my stomach at about mile 14 and let that be the all consuming thing in my head from that point on. Why did I get ill? Maybe the Gatorade I drank around mile 12. I have had trouble with that before but I accidentally grabbed it and was thirsty and just drank it...maybe not do that next time. Or maybe it was running hard or I stressed myself out or who knows. The good thing was that I had a great support system in my coach who just kept me going. I think if I hadn't been running with someone it would have been easy to slow way down. But we kept pushing...slower and slower but moving forward, typical plodding fashion. 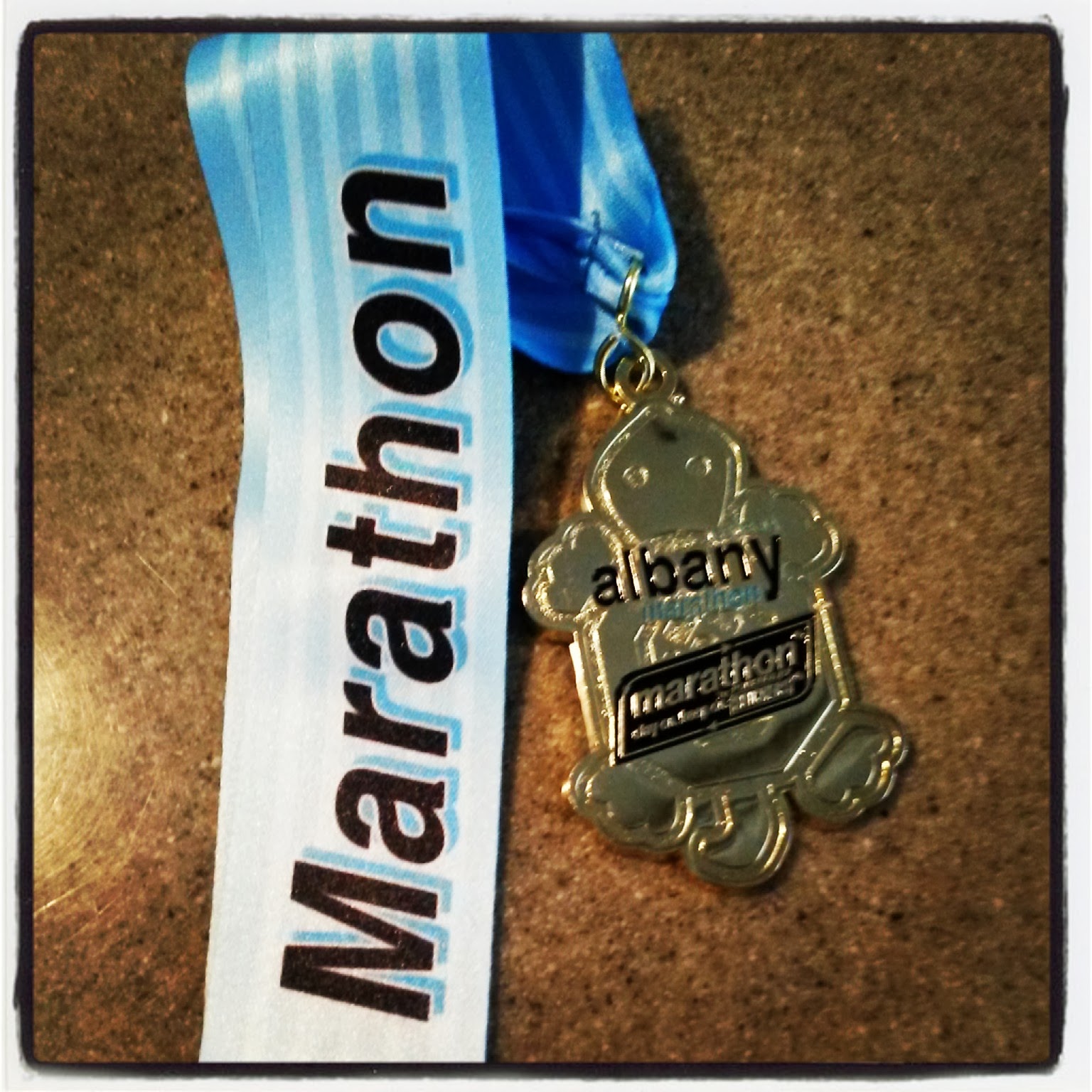 So it seems fitting that the medal is a turtle.

Lessons learned- stay away from Gatorade. Just don't. This is twice now that there has been a Gatorade/illness incident. Just don't drink it. I need to strengthen my hamstrings and hips. I think they are the weakest link at this point. I need to figure out a way to get more calories in during the marathon. I just don't want anything but water from miles 18 on and I need to get more fuel in me I think to not feel so blah during the last few miles. At the Georgia Marathon in a few weeks we are going to experiment with that.

And I have the best friends and family! Thanks to everyone who cheered me on and sent words of encouragement and congratulations. Your support means the world!


So of course the first thing I did the morning after the marathon is think about when my next marathon PR attempt will be and I have a pretty good idea.....
Albany marathon