February 18, 2014
I highly recommend you find a running/ travel partner like my friend Nicole because the fun factor is increased by like 1000%! Now we have run together and hung out together before but when driving to Birmingham in the middle of a conversation  I yelled out winery at the next left and she proceeded to turn left, no questions asked....well that is when I knew that we are best friends for life. The Mercedes marathon in in Birmingham which is about three hours away with a wine detour. Since we had nothing to do but pick-up race numbers and eat, a quick stop at a winery was a great way to kill time. If you find yourself in Harpersville Alabama stop by Morgan Creek Vineyards. 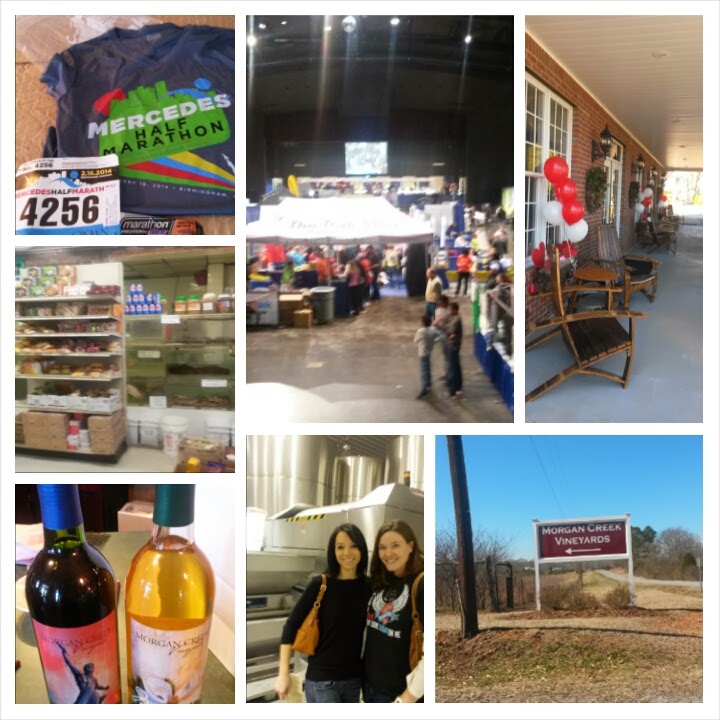 Once we got to Birmingham we decided to avoid getting hangry by stopping for lunch at the Red Pearl before hitting the expo. Delicious and connected to a super fun oriental market to explore and buy new and exciting stuff to try. Thanks to Yo Momma for all the great restaurant recommendations! After stuffing our faces with broccoli chicken it was on to the Boutwell Auditorium in downtown Birmingham to get our packets. The expo was medium sized and not too crowded. Just the right amount of samples and stuff to look at without spending half a day there. 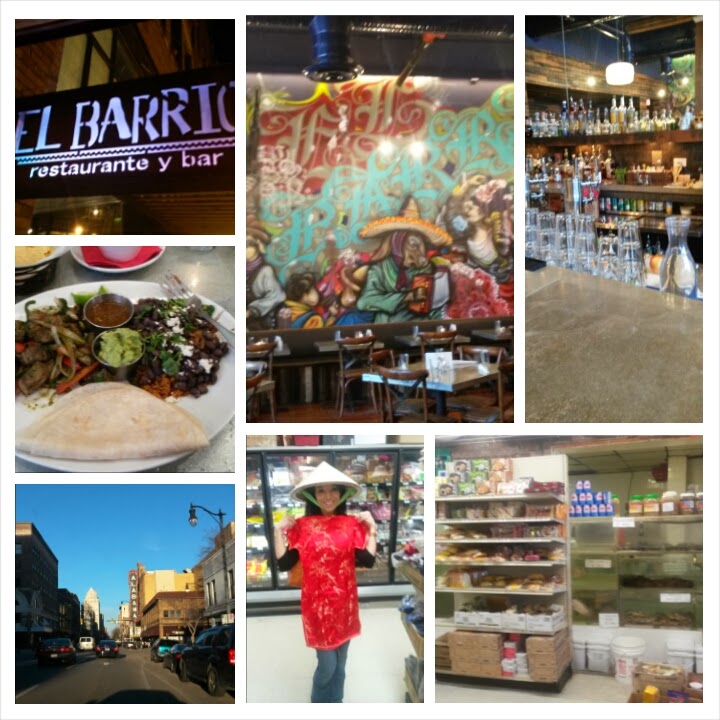 After expo fun we headed to our luxury accommodations at the Days Inn to wait until it was the appropriate time to eat again. We decided that it is always the appropriate time for a margarita (see best friends for life) so we headed to El Barrio and got there before they were seating for dinner but the bar was open so score 1 for us. We had heard rumor that it gets crowded pretty fast so we got a table in a hurry when possible and had delicious food for dinner. The restaurant is super cute and the food is delicious so I would for sure check it out if you are in the area. Then it was early to bed so we would be ready to tackle the hills the next day. 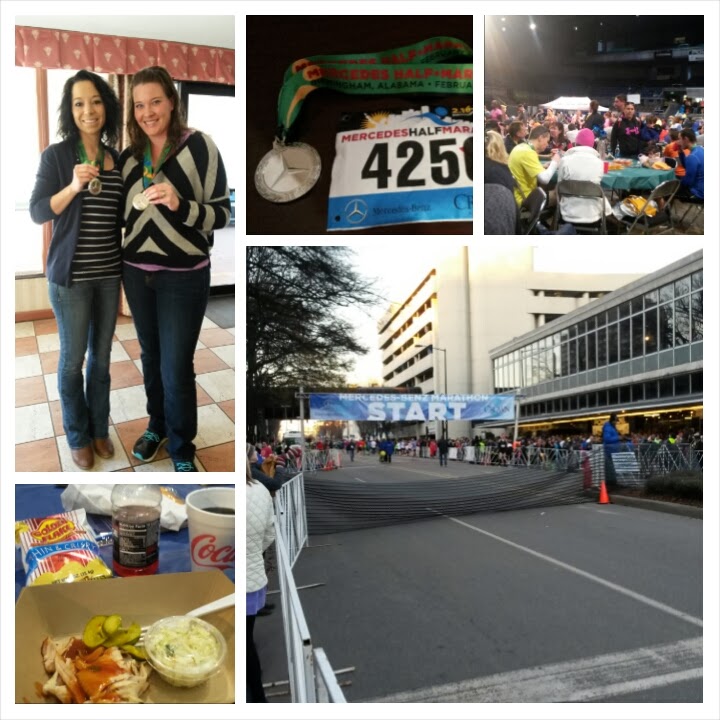 Race day started chilly but warmed up nicely which meant I was a sweaty mess by mile 2. We hit the corral about 15 minutes before the start. The one complaint I would have would be parking. The website just points people in the direction of the downtown parking areas. But for out of towners and directionally challenged individuals such as myself that isn't super helpful. We looked up some parking areas prior but just drove in the direction of the race with fingers crossed we would find something. We found a whole bunch of people parking in a field a few blocks from the race and figured we couldn't all get tickets... right. After the national anthem we were off and the hills began, small at first and then some bigger ones in the middle of the race. My plan was to run hard and that is what we did. Hitting sub 9s for a few miles and consistently putting out a good effort. My left hamstring has been bothering me for awhile and hills do not really help that situation. I backed off on the hills and just kept moving forward. It helped that I could just focus on Nicole when my hamstring really started to bother me. The second half of the race was more scenic than the first half except for the last two miles for some reason those miles just would not end and were very monotonous. But after 2:00:22 it was all over and it was on to the BBQ after party.

Overall I really enjoyed this race. One, running with Nicole is fun. She is a strong runner and I think some of that strength rubbed off since this was a hilly course and we did better than I had anticipated. The fact that we were laughing and chatting at mile 10 was a bit surprising to both of us since we both hate mile 10. I never would have been able to do that before while running the pace we were running. Two, my goal was to run strong but not get too crazy since Albany is in two weeks. This race got me excited about running that and showed me that I am stronger than I was two and a half months ago. This is my second fastest half on a fairly hilly course and I didn't feel like I was ever pushing too hard. The only downside is that it did show me my weakness- this freakin nagging hamstring pain. Pretty sure that is due to some weakness in my left hip and glute. Even with that I ran an awesome race and now there is nothing left to do but be as well rested and recovered as possible for Albany and try not to be a typical runner and get super weird and paranoid about the hamstring. And the three miles on Monday and five miles today were not totally consumed by thoughts of injured hamstring. Nope not obsessing at all. Okay maybe a little.


Thanks Nicole for an awesome race weekend! Can't wait to do it again!!!
12 days till Albany!
Mercedes Half