December 28, 2013
This morning I ran 20 miles....in the rain. The entire 20 miles it was raining. I may have been a bit bitter about this. The cool thing was that my coach met me for the last four to try to squeeze out some speed on tired legs. And even though I was cold and miserable and throwing a complete shit fit in my head we managed to run 4 miles at an average pace of 9:27. Whhaaaaaa. That was a huge confidence boost and I am lucky my coach is nice enough to also run in the rain.

On to more fun things! Yesterday D and I hit Hotlanta for some adventures. We hit the Aquarium, World of Coca- Cola, Trader Joe's and The Vortex. Fun, shopping and food. The perfect day. For those of you who may not know I have a weird fascination with marine life. So I was super excited for the aquarium. Probably more so than is healthy. The Georgia aquarium is the largest in the world and they have some incredible displays. 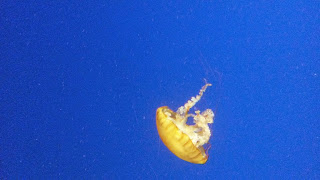 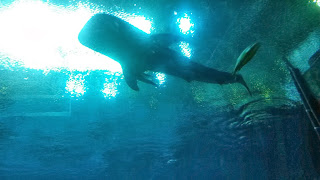 They have a tank large enough to hold like five whale sharks. Whale sharks are the size of a school bus. And there were five. In the same tank. And they didn't seem that big. That is a big freakin fish tank. 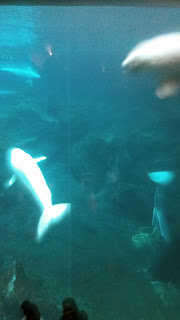 They also have beluga whales which I love and much like panda bears and manatees I feel this strange compulsion to hug them when I see them. Now I realize in all instances this would likely not end well for me but still want to hug'em. 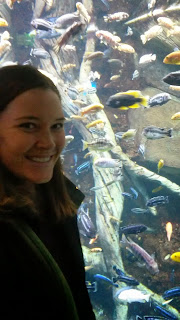 The aquarium was awesome but just too crowded for our taste and it is really pricey so be prepared for that sticker shock. Now I realize that we picked a day where kids are out of school and families are on vacation blah, blah, blah but it is my blog so I am going to vent. Seriously if your man beast of a 12 year old shoves me out of the way at the penguin display I am gonna shove them back. If they out weigh me it is fair game parents so don't look all shocked that I push back instead look shocked that your child thinks that shoving strangers is appropriate behavior. Same thing with banging on the glass at the exhibits. The albino alligator does not appreciate it and neither do I. Oh and if your toddler is throwing a fit in the walkway that is preventing the rest of us from getting around instead of telling them they are in the way and should move twenty times just pick them up and move them, they weigh all of four pounds and as demonstrated above I have no problem shoving your kid outta my way. Better you do it than me. Now I realize I don't have children so my tolerance level for all things child is very low but come on.

So what have we learned here- I don't function well in public. And should probably recognize the aquariums are primarily meant for children not adults with weird fish fascinations.

After getting our fill of fish we struck out for the World of Coca- Cola. This place has several exhibits- the vault where they keep the recipe, the Coca-Cola polar bear you can have your picture with, historical stuff about Coca-Cola and a bottling exhibit. D and I were there for one reason and one reason only. To sample stuff. 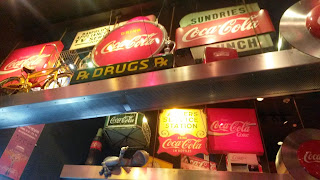 Everyone watches a movie and learns a little bit about the product in the beginning but then you are turned loose. We headed straight for the tasting room. 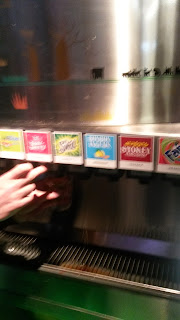 There are Cola products from all over the world and they all taste a little different. Best flavor ever - Inca Kola from Peru. Any Peruvian readers out there? If so can you send me a case of that stuff? Please and thank you! The worst was the Beverly from Italy. It just tasted off and bitter and ....never again. 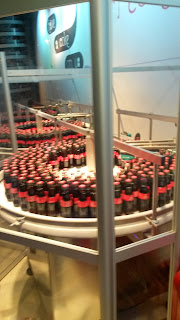 On the way out you got a glass coke to take with you.

After all that excitement we headed to Trader Joe's which we do not have in Columbus to stock up on yummy stuff.....okay mostly cheap wine. Then we headed to The Vortex for some grub and hit the road home.