June 30, 2013
This week I am running my 30th half marathon. I came up with the goal of running 30 half marathons before turning 30 as I was sitting injured after running my 3rd half marathon, the Women's Half in Scottsdale AZ. I had over done it really in my preparation to run the Tucson marathon. The half was the straw that broke the camel's back you could say as I toed the starting line injured and ended even more injured (A few days prior I had been to the doctor who advised that running might be a bad idea but that I was obviously going to do it so there wasn't much he could do, I am currently still working on my listening skills). I have never run the Tucson marathon, perhaps one day.

I can't help but find it slightly funny, ironic, completely and utterly frustrating that when I toe the line (at 6:30 a.m.- half marathons in the summer get the party started early) for my 30th half on Thursday (Happy Birthday America) it will be injured. I will be toeing the starting line for the Red, White and Boom with a tweaked Achilles and some weird (medical term) foot pain in my left foot. Those few brief wonderful trail running days last week did not end well for me as the pain came back and I have grown increasingly frustrated. 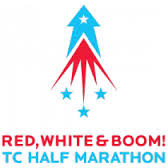 So in true 'do as I say not as I do fashion' I am going to ignore all common sense that says maybe you shouldn't run and run. Or run/ walk, or walk or crawl if need be because I will complete this goal. I have no expectations of PRing or putting in a hard effort really. In true plodder fashion I just want to finish. Grab my medal, thank the volunteers and geek out about running with thousands of other crazy runners, just as I have now 29 other times. It is weird to think that the last two years of my life has been consumed by this goal. So much money and time planning, training, running. Sometimes three half marathons in a month. Two run in one weekend after a stay in the hospital. Two nothing but uphill. Several states and several road trips. Some with friends, some with family, some solo. When I wake up on July 5th will I feel any different? Most likely sore and in pain, but then that has been every race. But am I a different person than I was two years ago when I decided that I was going to go after this goal? That I will have to think on. Right now I am excited to run my last half marathon of my 30 goal in the great city of Minneapolis with my best friend and her fiance there to cheer me on. I couldn't think of a better way to wrap this thing up. And of course I must decide what to wear.

In terms of the injury. I have turned to drinking heavily and sulking in the corner, kidding, kidding.....kidding. Instead of freaking out and being frustrated I will continue to ice and take it easy. If I can manage to run on the treadmill without too much pain then I will do that. Or I will strength train. Or do yoga. Or walk the dog. But I will not sit around and pout....too much. Whatever I do I will not feel defeated and that my two marathons in the fall are in jeopardy. Nope, will not do that.

And I will go to one of the best sports doctors around on July 23rd because that is when she had the first opening (she is that good- she has a waiting list). I have decided it is worth waiting to see one of the best since my left foot is always giving me problems. So until the 23rd I will keep calm and carry on as they say (they being the British I believe).


Cheers to 30 half marathons!

How do you deal with injuries?
What crazy goals have you completed lately?
30 before 30 Red White & Boom