April 08, 2013
Warning: I loved this race, I ran really fast (really fast for me anywho), it was a perfect day and I am super happy about this. So this means too many pictures, words of love for the Shamrock shuffle and a new dedication to shorter races. Read on at your own risk. 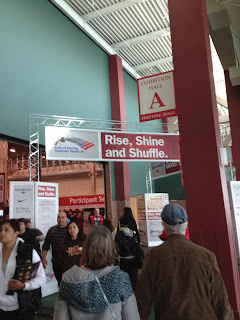 Packet pick-up was at Navy Pier. I had never been so I forced D to go with me so we could check it out. It was crazy crowded and parking was crowded and slow but only $10 with a race expo validation ticket- win. I have never done a race this big before, more than 33,000 people, my peanut brain can't comprehend. But everything was efficient and smooth running. Huge race expo, well marked, organized packet pick-up, lots of free samples and booths for lots of other races. It was fun to walk around. If I were a millionaire I would have bought a lot of stuff but since I am not I tried to steer clear of running gear. 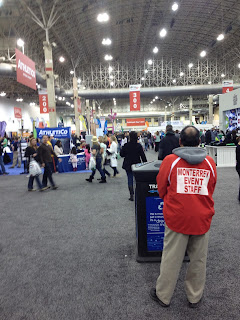 Having the expo at Navy Pier was fun. There is stuff to do and food to eat and lots of parking. Plus multiple ways to get there with public transit. There is an awesome free stained glass museum. So pretty. Need to take the Mom-in-law next time she is visiting since she does stained glass as a hobby. 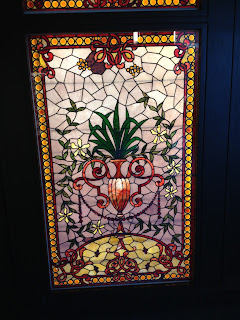 After wandering around looking at stuff for awhile we went to Harry Caray's for lunch and then headed home. 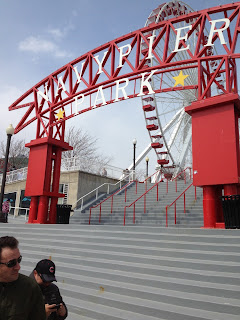 They also have a lot of official merchandise at the expo and at the race. I couldn't resist the pint glass- because I enjoy threatening my husband with death if he drops it while drinking from it. I have one from the Colorado Marathon that I want to put in a museum. Maybe I will calm down about that after I complete another marathon. If you accidentally break the pint glass does the marathon still count..... 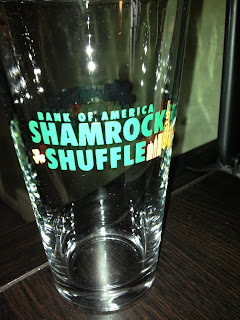 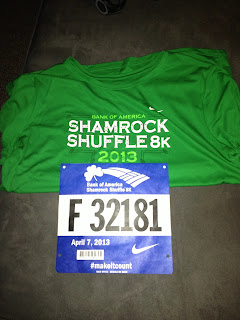 Race day was perfect weather. Slightly cool but no rain and windy but not ridiculously so. I rode with a coworker who has a friend who owns a building with parking near the start, lucked out there. There was parking garages and public transit but road closures were a bit of a concern so pay attention to that if you plan to drive.. 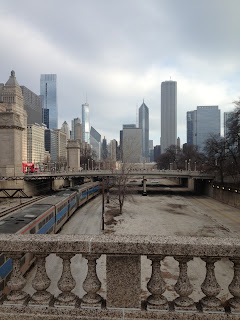 I was in Wave 2 Corral F so we started at 9:15. Bag check was fast and well-organized. Plenty of bathrooms and lots of volunteers to direct people to where they needed to be. 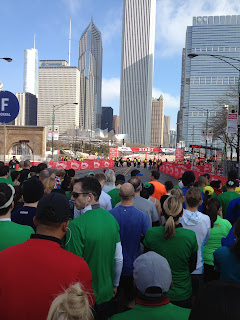 I was there early so stood around people watching and at one part turned around and saw this: 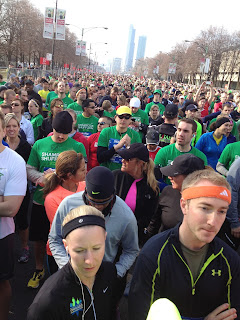 Holy people, all I could think was once I start do not drop your phone and don't get trampled. We started right on time and took off through the city. Even though there was a ton of people with the staggered corral starts it never seemed like I was closed in. There was some weaving when I caught up to the wave that started before ours but up until close to the finish it didn't seem crowded. I do think that you need to put yourself in the correct wave though. Next year I think I might aim for a bit of a faster corral. 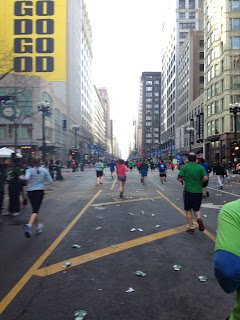 The last mile there was a pretty noticeable hill but the rest of the course was fairly easy and it was really cool to run among the buildings. Aid stations are huge. There were two with water and Gatorade and I swear they were a block long. I didn't stop but it was more than enough for a five mile race in my opinion. 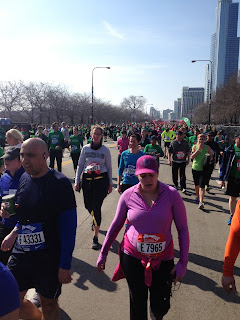 I took off fast and tried to keep pushing the pace. I haven't done a short race in awhile and thought I could keep it going. I was pleasantly surprised at my ability to keep a sub 9 pace with the higher mileage I have been running lately. Made me excited to see what I can do if I focus on speed for awhile. Thinking this summer could be the summer of short races and speedwork. 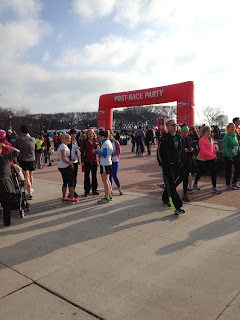 Once you hit the finish line you had to keep moving down the line. As you walked to the post-race party area they handed you water and a bag of snacks. Each racer had a drink ticket attached to their big and there was free food at the party- but with the massive amount of people there was a pretty good wait. Overall I loved this race and it made me super excited for Chicago in October!
Results:


I am all for running this race again if I get the chance.

Do you have a favorite race you would recommend?
Shamrock Shuffle