April 16, 2013
A coworker asked me if what has happened in Boston has made me rethink running the Chicago marathon.

(And yes I torture everyone around me with my talk about running, not just my blog readers).
I understood the question. Chicago is a big race with a huge crowd in a big city not unlike Boston. Televised and watched by thousands. Many similarities. Enough to make someone hesitate for a moment.

I looked at her as if she was crazy and said "hell no. I will run Chicago in part as a giant FUCK YOU to whoever thinks they can make people fear doing the things they love".

This senseless violence made me sad but then mad. Really mad. This feels personal. How could it not. It is Boston. It is running. Those runners are me. Those spectators are my family and friends. That race is my race. It is every runners race.

Every race, marathon or otherwise that goes on is in defiance of this horrific act of violence. I will not let something as horrible as this take away from my joy of running, make me fearful or strip away my identity as a runner. Until yesterday I had never, ever considered a race to be a target for violence, an unsafe place, anything but a celebration of the competition between fellow runners and more importantly the competition to quiet the little voice in your head that says you are tired, hungry, thirsty, sore- just give up.

Runners are a tough breed (strange but tough). The t-shirt that jokingly says my sport is your sport's punishment is funny because it is true. Runners actively choose to get out of bed at 4 a.m. to get twenty mile training runs in before heading to work. A large majority of runners have more toes than toenails. 26.2 miles- that is for fun.

The friends and family of runners are even tougher. They put up with the constant chatter about PRs, chaffing, race registrations, my left calf hurts, my right hamstring feels tight, blah blah blah, often times with no actual interest in running. They get up at 3:30 a.m. to drop their runner off at start lines. Stand around in the cold, heat, rain, snow to watch their runner complete a race- not even compete because most runners are not elites, they will not win, they will not even place in their age group. They are competing with themselves and completing goals. These people are all the work and none of the glory- no shiny race medal for dealing with a cranky runner after a long run. No t-shirt with the race logo on it for standing at a finish line for 4 and a half hours to give a sweaty, smelly runner a hug and make them feel like they have won.

One day I will run Boston. Maybe I will qualify. I might have to age into it. Maybe I will have to raise enough charity money to fund a small country to enter but I will run Boston. Because I am a runner and it is what we do. And when I am done running Boston I will cheer on my fellow runners because runners are family. And whether I am running Chicago, Boston or the local 10K I will be proud to be part of a community that runs towards helping others and instead of being a force of destruction, is a force for good, for building each other up and supporting each other in good times and in bad. 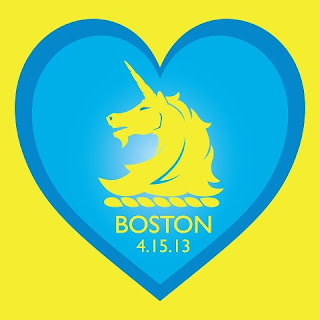