March 01, 2013
Miles run:121.6 which is pretty dang good considering February (anyone else misspell February every single time) 28 days in it.

Half marathons done: 0 but March O'Madness half in two weeks. Super excited and hopeful that no snow will be on the ground.

Obtainment of green shirt and shamrock headband for race: check 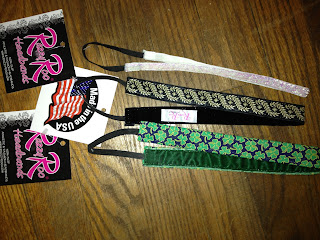 Inability to buy just one running head band at a time: check

Cross training: so bad.
I was being so good about yoga and strength and now it is all run, run, run with a side of sit-ups and push-ups. I have been good at doing my hip exercises but I need to step up my game and get back to yoga. It gets harder as my mid-week runs get longer and time seems to disappear into a black hole (aka facebook, instagram and the internet in general- oh and I work, yes that happens too).

Money spent on races: too dang much
Time to reel it in on that. I have one more race to register for to complete my thirty before thirty and then it is hiatus time for awhile. I love doing half marathons but it gets expensive. I need to pick one or two (okay maybe three or four) a year to focus on. I would also like to do some shorter distances and see how that goes.....$$$$. Okay so maybe I need to set a yearly limit on races to run. I am just so bad at race moderation.

Relationship with Treadmill: Rocky
I was doing so good telling myself running on the treadmill is fun and good blah, blah, blah. I hate it and want to go outside except there is one million feet of snow (I measured it), it is cold and windy....sometimes and I am a big baby and stay in my climate controlled running cocoon. This runner is ready for spring. But in contrast I did set a PR during my tempo run on the treadmill this morning so that is a win I guess.

Well I am off to Kentucky for the weekend where I hope some outside running occurs. Happy weekend everyone.


Anyone have exciting weekend plans or racing?