The Egg Shell Shuffle sells out fast so sign up early. Besides the awesome medal there is an adult Easter egg hunt where they get donations of running stuff and museum passes and candy.


Once again I was using this race as a long distance training run. This week only 15 miles (when 15 got placed in the 'only' column I am not sure). This race has race day packet pick-up which is nice because it was south of my house by about a hour and twenty minutes. The race is held in a forest preserve with a small two mile loop at the beginning and then an out and back for the rest with the majority on a bike path. 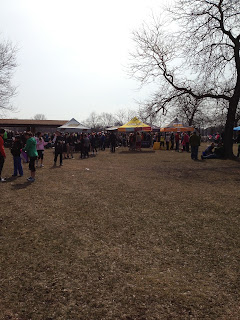 The weather was perfect. Little windy but no snow, no rain and it was not freezing. Aid stations every few miles with poweraide gels at mile 7ish and 9ish maybe. Low key start and finish line, as in I had a hard time finding the start as there were just timing mats in the parking lot without a banner or anything but follow the crowd and it was fine. I had a weird moment where I was like 'wait I have run up this hill before'- um yeah this route is part of the Turkey Trot half I did in November. 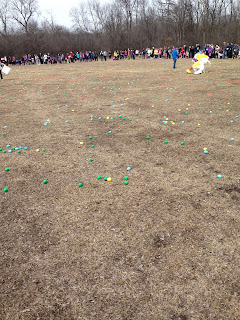 The finish line had water, bagels and bananas for participants. There was also a 5K event. The start was at 8:30. At 11:15 they had an Easter egg hung for kids and 11:30 an Easter egg hunt for adults. That part was really fun but man with the number of people and the speed I only managed to grab a few eggs. The nice thing about this race is instead of a race t-shirt you get running shorts, Nike tempo shorts with the race logo on them. I love this idea since I have a million race shirts at this point it is nice to get bottoms. If you live close to Dick Pond Athletic store you could stop buy and try them on before signing up to make sure you got the right size. I just picked bootylicious size and they fit fine. We got stuff in a drawstring bag which came in handy for egg hunting. 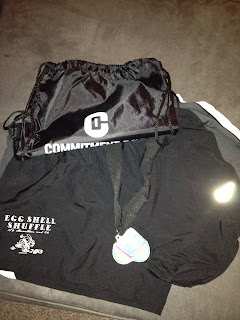 Overall this race was well run and fun with people dressing up in bunny ears and fun spring colors. I would recommend it. It was a perfect day for running. Unfortunately this was not my best showing though I am okay with my finish time 2:09:02 (for those of you who follow my on twitter- my 2:08:59 was garmin time- dang it:)).

There were a couple issues with how I ran this race. I had some stomach issues, nothing that resulted in a sprint into the woods but I was uncomfortable most of the way. Don't you hate that- running can be uncomfortable enough, no need for the stomach to get involved.

I also went out way fast (first mile in 8:24- it was like I had lost my mind), had to reign myself in, turn the watch mode to time and try to run by feel. My leg had felt off this past week which resulted in about 13 miles of missed training. No biggie but it was feeling better and I didn't want to mess that up so thought running by feel seemed smart. I still pushed too hard in the beginning and ended up crashing around mile 10. I was just exhausted and my legs were done. I think this seemed extra frustrating because in my mind I was all- hey you only had a two mile warm-up instead of a seven you should be better than this, I know I can run better than I did. At the very least I can pace myself better than I did.

In reality I have run more mileage this month (165 miles) than ever before. I have run three weekends hard in a row. So I need to turn the crazy runner brain off and be pleased that I have been able to do what I have done. After this many miles and this much training it is all about the marathon- getting to that starting line fit, injury free (knock on wood, and again just to be safe) and healthy. I think I can race a half marathon faster but now is not that time.