November 06, 2012
Saturday November 3rd was the Tyranena Beer 1/2. This race caught my eye because...um.... BEER ...hello. This race is put on the Tyranena brewery in Lake Mills, WI which was about a two hour drive from my house. The race starts at 11:30 a.m. and only has packet pick-up on the day of so it worked out perfectly. We rolled into Lake Mills around 10:15ish to snow. Nothing was sticking but I freaked out for a minute. I am not ready for that yet. We parked (D came along for this one, I had him at beer) right next to the race tent and headed in for my race packet. 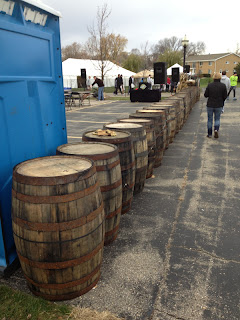 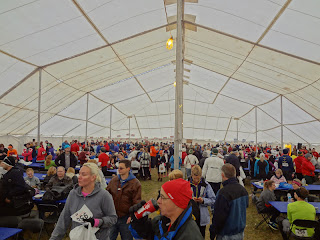 The tent was huge and warm. Good thing since it was freezing outside. After grabbing my number, returning to the car to drop stuff off and obtain ipod and gels we headed back into the tent to keep warm before the start. 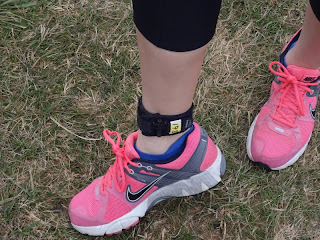 The timing chip went around the ankle which I thought would annoy the heck out of me was totally fine and I forgot I was wearing it. 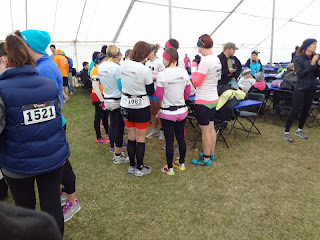 D and I did some people watching while waiting and noticed these lovely ladies all with underwear on the outside. And I have no idea why. About ten minutes before the start we all ventured outside to the cold and took off at 11:30. There was also a 5k that started at 12:30.The course was a loop course partly on roads through the town of Lake Mills and a very nice neighborhood, and on a trail around a lake.  This race started cold, quickly warmed up and then got way cold about half way through when we headed into woods with lots of shade and ran right next to the lake. It was funny to watch everyone strip down after the first mile or two and then throw everything back on around mile 7. I really struggled the last half of this race. I got super cold which was weird because it didn't seem to stop the sweating and it was like my whole body clenched up. I am a big Arizona wheeny still. It wasn't until the last two miles of the race when we were back in the sunshine I was able to shake it off and relax again. I don't think the temps ever got about 40 degrees. Oh and there were hills- so be prepared for that.

I did just fine on the early hills but really felt the hills in the last half when my quads and hamstrings were angry. I came in at 2:09:56 and I was done. I haven't been this tired after a half in awhile. The combination of hills, cold and late start really did a number on me. Oh and the other three halves I ran in the two week prior may have had something to do with the tired feeling. After I came across the finish I had to immediately stop and bend down to take off my timing chip to hand it in. Then I took two steps and came to halt outside the refreshment/ medal tent. And waited around for ten minutes. I have never had this problem before. And I did not like it.
There was an amazing amount of snacks inside the tent- cookies, bananas, bagels, etc. But it was so crowded and loud in there I just wanted to keep moving so after grabbing some water I hightailed it to the medal area and found the hold up. There was one guy all by his lonesome personally putting a medal around every single person's neck and saying congratulations which was super nice and sweet but they need about ten more of him to keep everyone moving.
This aspect of the race did not please me. But medals make me smile every time.
After having a minor freak out in the medal tent we headed back to the big beer tent for lasagna. D and I split up, D grabbed beer and I grabbed some veggie lasagna, salad and a bread stick (you get two beer tickets and a dinner packet in your race packet). 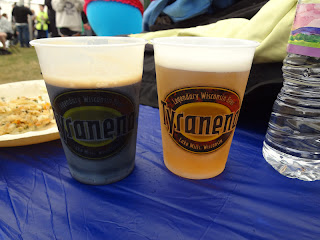 Their beer is delicious. If you see it you should give it a try. I liked the light, D liked the dark. 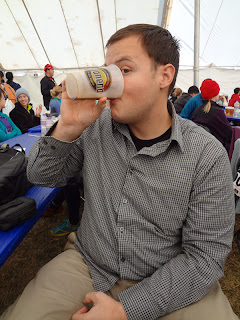 Overall D gave this race two thumbs up. His favorite by far and it has nothing to do with the fact he got to hang out at a brewery and drink beer. Okay it has everything to do with this being his favorite.
Overall this race was fun and nicely put on. The volunteers were awesome as usual. There were about four aid stations and an informal beer station manned by a family. Overall it was well organized though the slow down at the finish could be made more efficient. The lasagna dinner was delicious and it looked like they had plenty for everyone. If you are looking for a fun race I would recommend this one. 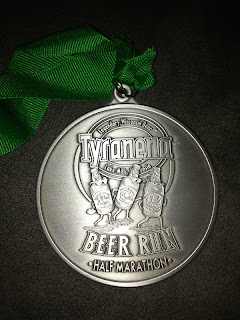 30 before 30 Tyranena Beer Half