November 24, 2012
Well this half was a mix of good, bad and frozen. The Schaumburg Half and 5K Turkey Trot takes place in Schaumburg, IL mostly in a forest preserve. It is mostly paved bike path with some short sections through grass.  The course is point to point though there were two out and back sections.

I left my abode at 6:40 this morning and arrived at the finish area for packet pick-up around 8 a.m. Packet pick-up was a breeze. After grabbing my number and fleece I practically sprinted back to my car to stay warm. There was a moment when I woke up and thought hey I could just stay in bed. And then there was another moment when I sat shivering in my car, the big Arizona baby I am am, when I thought hey I got my fleece I could just drive home, heater on full blast. But I knew I would never live that down so eventually I got up the courage to get on the bus to head to the start. 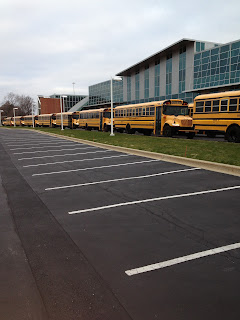 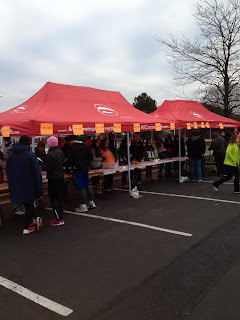 After a ten minute shuttle ride to the start, I hit the loo one last time and then stood shivering for thirty minutes. It was so cold. I tried jumping around, marching in place, blowing on my double gloved hands. But it was no use. I am a big baby when it comes to cold. Whatever toughness I had built up living in Colorado and Alaska was totally erased by living in Arizona. It is going to be a long winter.

The race started at 9:15. I lined up a little behind the 8:47 pacers. Though I realized as I could not feel my toes, feet, well anything really that any plan I had of running harder was probably out the window. First priority, regain circulation. The first five and a half, six miles went off without a hitch. I was running between 8:30s and 8:50s and felt pretty good. Well the parts of my body I could feel felt fine. Around mile six I took a pit stop. Fatal mistake. After my little pit stop my left hip just seized up. Every step became painful and my stride was just all out of whack.

So now the question becomes did I somehow hurt myself in the crapper? Was it the sudden stop and fast restart that did me in. Was it just odd movements while it was very cold out? Is this possibly the most awkward question asked in the history of this blog? Knowing me my guess is no.

After the great porto-john incident 2012 the race was downhill for me. It was pretty much a run/walk for me the rest of the way. It was a little frustrating falling behind and watching the 9 minute pacers catch-up and pass me. But not every race can be total magic. And I gotta say considering I was all out of whack and freezing my butt off I feel pretty good about my 2:10:03 finish. There was a moment when I had to laugh at myself thinking well I could have a DNF for a totally different reason. Make a statement about a DNF and this is what you get- hip pain and the longest run/walk of your life.

So what have we learned besides never under any circumstance take a bathroom break during a run- well I am not a huge fan of cold weather running. Mostly the standing around waiting for the run to start is the worst part. But the walk back to the car at the end is no picnic either. I am glad I will not be doing any more half marathons until the spring. 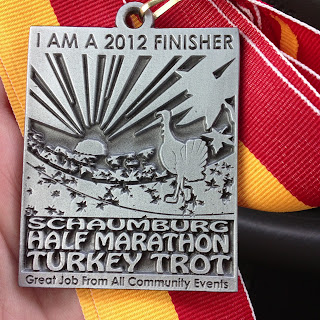 Overall All Community Events puts on a great race. The course for the most part was nice and well staffed with awesome volunteers.  The medal and fleece are top notch. The aid stations had water and gatorade and there was accel gel around maybe mile 8 though I don't really remember. The finish line had plenty of snacks for runners and bottles of water. There was plenty of parking and the shuttle system worked well. If it had been about thirty degrees warmer it would have been a perfect race. 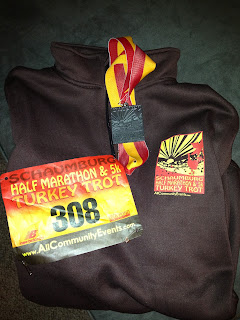