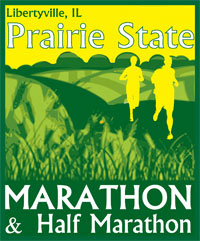 Libertyville is about 45 minutes away from where I live so pretty much the perfect half. This race is a marathon and half combined. It has been awhile since I had run a race that involved marathon runners. Man marathoners are awesome. Especially the ones that pass me when I still have three miles to go in the half....what the heck, you are not human.

I woke up at 5 and had a protein pancake and some coffee. Slapped on 16 shades of pink and headed to the race around 6 a.m. 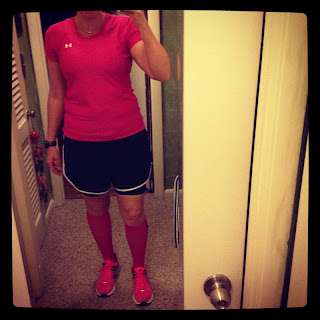 The race start was in the Independence Groove forest preserve area. There was a lot of parking and off-site parking with a shuttle available. I left extra early with the idea I wanted close parking so I could sit in my car until the race because I am a weeny and it was cold though my outfit says otherwise. I don't know how to dress for colder races. There will be a learning curve on this. 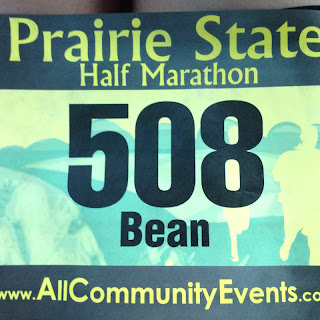 Packet pick-up was from 7 to 7:40. I was super excited when I got my bib because I had forgotten I had personalized it. Fun! After picking up my bib I wandered for a minute taking pictures and then headed back to my car to stay warm until the 8 a.m. start. The fall colors at this race were amazing. 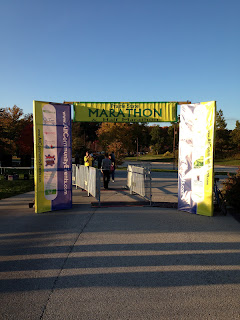 The marathoners and the halfers started together and the race started on time. The start line was squeezy and it took awhile to get across the line but it is mat timed so not a huge deal. My goal was to try to break two hours. Not to rush to the exciting conclusion but it did not happen. I made my first mistake at the start line. I still line up with the 10 minute milers. I run faster than that. I need to grow a pair and get up with the 9 minute milers. Due to starting so far back I spent the first two miles weaving and that used up a lot of energy and slowed me down. The trail was fairly narrow, maybe allowed four people across and that added some difficulty. Next time I need to move it on up the line. 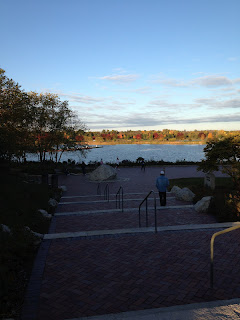 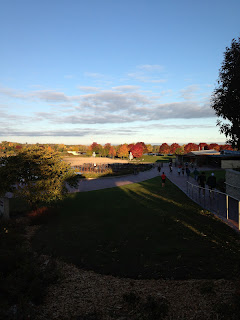 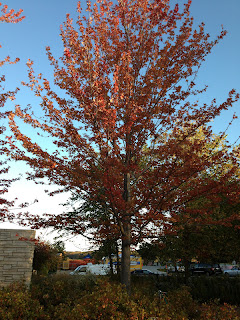 The course was mostly a crushed gravel trail through the forest preserve. Second mistake made, rolling my ankles on some acorns. Parts of the trail had a lot of fallen leaves which hid sticks and acorns. I rolled the right ankle around mile three and to even things out I guess, rolled the left around mile 9. Both times I recovered and didn't fall down but it did not feel great and slowed me down for a bit. Beautiful scenery, nice and cool- I was never hot but never cold, and great aid stations with water, Gatorade and Accel gel available at some stations. It was an out and back. The best part was all the people at the turn around cheering us on. There were not spectators along the course but a ton at the turn around which was awesome and pumped me up. 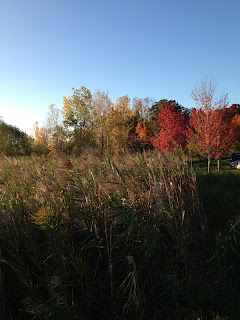 The third issue that came up, around mile 7 an emergency vehicle came charging up the path making all the runners stop and get out of the way. That cost me about a minute. It was around this time were I had to let the two hour goal go. Well first I got irrationally mad at who ever was having a life threatening emergency which made me stop running and then realized that that attitude was not great. So I relaxed a bit. It was gonna be close up until that point, I was not running as fast as I wanted to due to the crowd but after stopping for the emergency vehicle I felt a bit defeated. So I just ran and enjoyed the scenery and chatted with some other runners around me. The rest of the way I just tried to hold on, struggled up some hills and tried to pick it up the last mile for a strong finish. And I got a PR! I will take it. One step closer to the two hour goal. I saw some work friends at the finish which was exciting (I gave D the morning off since I really want him to go with me to a couple other races this month and I get that standing around in the freezing cold waiting for me to run is not the most fun way to spend a morning). After grabbing a banana and some water and saying goodbye to my friends I stretched a bit, cheered on the marathoners still going (side note: this would be an awesome marathon to run. The course is beautiful and easy on the joints since most is not on paved surfaces, great aid stations, but you run right past the finish and still have miles of out and back to go. I think that would mess with my mind and be tough to do) and then headed home. 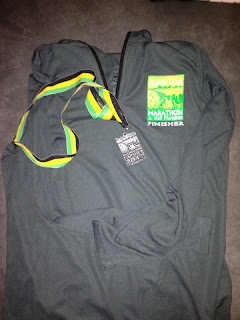 Official finish time 2:03:57. I will take it. The race had a nice long sleeve tech shirt and a really nice medal. Overall I thought this race was done well and in a great location. I would run this race again. One of four done for the month of October! 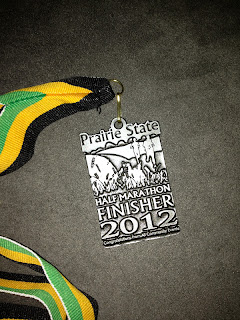 The hunt to break two hours is still on.