Cross training: not consistent
There was some zumba, some yoga, some spinning, some strength but nothing that was done with any regularity. This and stretching, icing and rolling are areas I really need to work on. 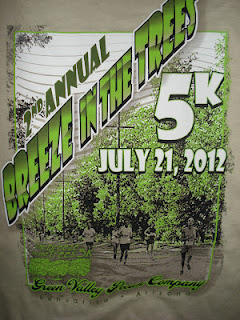 No medals were obtained but I did get this sweet t-shirt. The 5K was fun and I think I would like to work on some speed and do more of them. But my first love will probably always be the half distance.

Goals for August:
We have some large life changes going on around here (moving and new job) that are generating a fair amount of stress and demands on time so this month my main goal is to keep running consistently. I want to be better about stretching, rolling and icing as well. If I get some cross training in super but that will just be an added bonus. August will most likely be my last month of no races for awhile so now is the time to put in the effort to hopefully see a 2 hour PR in the fall or at the very least a PR of some kind.