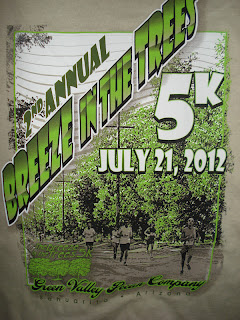 otherwise known as the first 5k I have done in three years. My main goal was to get under 30 minutes and I did. Official time 27:51, Garmin time 27:39 average of 8:55 a mile. Whoop. I was pretty dang excited for myself. I thought for a second that I might have placed in my age group because the girl who came in 20 seconds after me placed in her age group, but no. My age group was full of tall, willowy, speedy people running it in 20 minutes. Dang. I placed 7th in my age group. 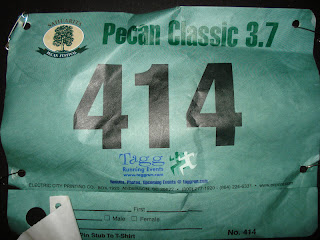 Overall this race was a lot of fun. It was fun to do a race where I knew it would be over quickly unlike half marathons, 5ks can hurt early on and no big deal because as long as you don't pass out you can stop moving in about 30 minutes. The course was a flat loop along a dirt road and on grass and was extremely muddy. About half way through my feet got really heavy with all the mud stuck on my shoes until the giant clumps started flying off once we made it back on to the dirt road. I think that slowed me down a bit and got me curious if I would be faster on a road course without slipping and sliding and carrying mud around. Perhaps

Overall this 5k was well organized and a nice race through a pecan farm. At the finish they had the local firemen cooking pancakes for the runners and overall race winners got a leaf medal and a pecan pie and age group winners got a leaf medal. The race started about 5 minutes late due to the course being so muddy and the course marker having trouble driving around to mark the course (it had poured the day before). I met lots of nice people and would for sure do this race again.

The only down side, I really aggravated whatever is happening in my right leg. This morning my whole calf was really tight and took awhile to get things moving. After I was up and about for awhile my calf felt okay enough to head out the door. I told myself I would try for my long run and see how it goes. Um it didn't go. Two miles in I just stopped. Something in my brain said 'hey you, stop running on this leg it is getting worse and now instead of going away after a mile warm up it feels worse. Don't be dumb STOP RUNNING". So that is what I did I stopped dead in my tracks turned around and hobbled home. And iced and rolled and sticked the crap out of my calf and it still hurts. It hurts to walk and it hurts to run, it just hurts.

I really want to ignore it and keep running due to the RW Streak Extreme I have been doing. But I know I should not. It is not worth it. Stop the streak and take this week off or keep doing the streak and potentially take months off if it is serious. The streak has officially ended for me. I think I probably have some shin splint/ tendinitis crap happening and am hoping a week of non-running, cross training and stretching will = me up and running in no time. Until then I will be the grumpy one attempting to do yoga and carrying around a foam roller.

Plan for the week: not run
instead do yoga, lift upper body, start plank a day with D, uncover spin bike, use spin bike if doesn't bother leg, lay on floor thinking about doing yoga but watch reality television instead, ice, foam roll, pay D in gummy bears to help roll my calf out, be super sad streak attempt is over but still excited for others to carry on- stalk them on twitter sending encouraging tweets, stare longingly at running shoes, throw a fit because can't go running, try to be mature about it. Seems like a good plan.


How have you all dealt with injuries?
Any advice?