April 30, 2012
Catching the shuttle buses between 4am and 5am for the Mount Lemmon Half means an early wake up. The night before I laid out my stuff since I knew my brain would be dead at 3:30 in the morning. 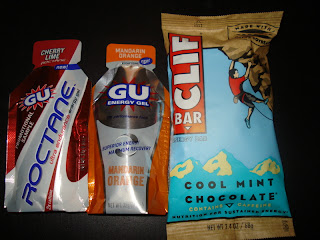 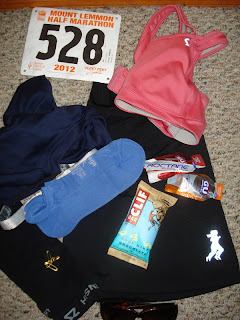 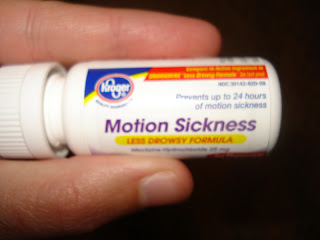 I also remembered that last time coming down the mountain roads in a bus made me almost puke on the poor lady next to me so I popped one of these bad boys in my pocket to take after the race but before the bus ride down. No one deserves to be vomited on after trudging up Mount Lemmon. 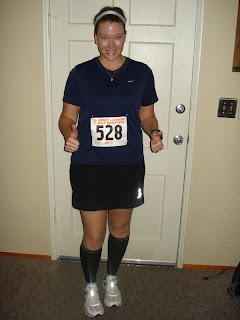 D got up to wish me luck and take the traditional pre-race double thumbs up picture and then went back to bed. Logistically having spectators at this race is kind of a nightmare. The only good place to park and hang out is at the finish but that means driving up 26 miles of switchback mountain roads behind a pilot car to get there. I gave D the morning off and headed out on my own to once again tackle the mountain. 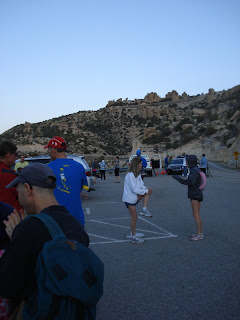 The start was just like last time, just a timing pad. It seemed like there were a lot less people at this race than the one in the fall . Probably too close together. The bus dropped us off just below windy point to hang out and use the porto potties for about an hour and a half. And then a lady sang the national anthem and we were off. 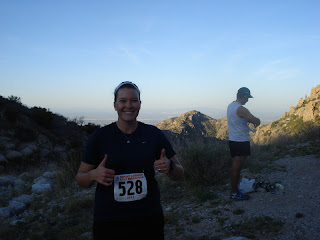 And we ran up 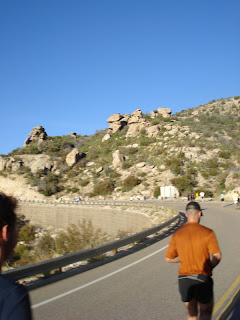 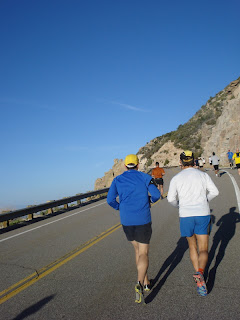 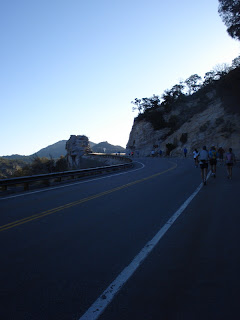 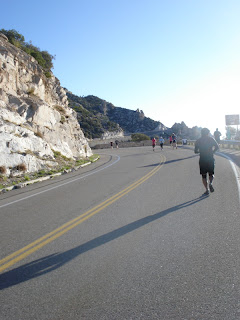 and then it was flat for a little bit..... and then we ran up some more. 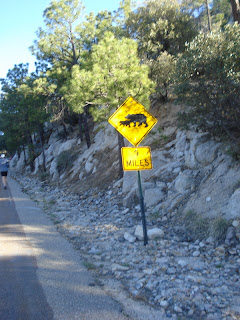 Then I passed this sign and got to thinking about how not cool it would be to run into a bear up here while running. And wondering what types of bears lived up here and what the heck they drank since there isn't a whole lot of water..... or eat for that matter. 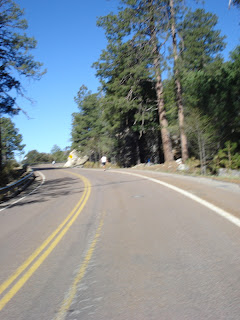 and then I ran up some more. 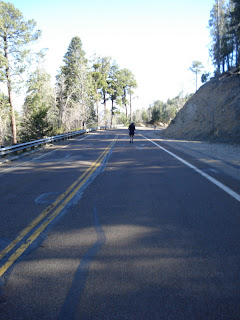 and more up and then there was some down hill where I got to talking with a 70 year old gentleman who was a freaking animal running up the hills and has done multiple marathons and registered to run both the NYC and Chicago marathon this year. Which I thought was really awesome and then wondered why I was such a wimp about signing up for a marathon and then said a brief prayer to the running gods to please allow me to still be running at 70. 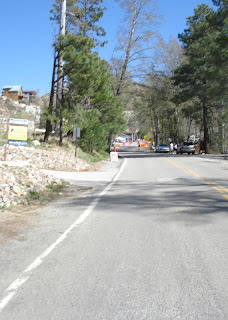 And then I ran downhill and then uphill towards the finish (can you see it uphill in the distance). 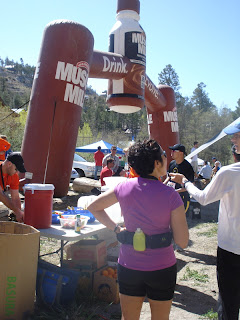 And Mount Lemmon Round two was over. They had  bagels, watermelon, bananas, bread (with butter, classy) and muscle milk. A store in Summerhaven also handed out breakfast burritos and beverages to the runners.
This race was almost exactly the same as the race in October. I still didn't train enough at all for the hills and the altitude still made me breathe even harder than my normal 'panting I am gonna die' breathing. And the hills still hurt. There was still a lot of walking. I still got easily distracted by the scenery and walked too much at times. That being said this is one of my favorite races I think. Why?

1) you meet some really awesome people. There is this kind of collective excitement/ dread what have I done feeling on the buses. It is easy to start a conversation and ask why other people are crazy and signed up for this race. I met these awesome gals Rachel and Nataly who were both running their first 1/2 marathons and they killed it. Rachel practically placed she was so awesome and Nat made it under the 3 hour mark which is amazing for this race. We also met some runners who offered us a ride down off the mountain so we wouldn't have to wait for the bus ( so I got to concentrate on not puking in their car instead of not puking on the bus, the medicine did not work). And one of these runners placed first in their age category.  Rubbing elbows with running celebrities.

2) There are a lot of people walking during the race so you get to chatting about running, other races etc. It is fun to meet other 'crazy' people who like running as much as I do.

4) This race is small enough in size that it doesn't feel crowded at all.

5) It is a reasonable price ( I paid $55 with discount, I think normally $65 if you register early) for a very scenic and challenging race.

Better than last time so whoop for that! Your legs will hurt at the end of this race. After getting off the mountain I put on my compression shorts and socks for the rest of the day. I think that saved me because I feel pretty okay today. Half #15 in the bag!