March 29, 2012
Well once again I think I am totally hot stuff because I completed a treadmill workout. I am fully aware that people run on treadmills all the time at a mileage and a speed I can't comprehend. But just let me ride my pathetic little high for awhile.

It is probably easier to broker a peace agreement in the middle east than it is for me to convince myself to get my bodacious bubble butt to the gym and on the treadmill.
Excuse # 1: I am tired
Response: Um so is the rest of America, no one cares.
Excuse #2: My legs are sore
Response: They are the you have been working out hard sore, not the you are gonna break yourself sore so doesn't count. Reality check you are on a new training plan and running harder so it is gonna hurt, get over it. And stretch.
Excuse #3: I don't need speedwork I am already fast.
Response: That statement is so false it is funny.
Excuse #4: The treadmill makes me sweaty
Response: Everything makes you sweaty.
Argh. So after reviewing every possible reason to be lame I got it together and headed to the gym. I had the stink face on but I did it. I also realized that since I had mentioned in the blog yesterday I felt obligated to go. Didn't want people calling me out on it. Apparently there is something to blogging keeping you accountable.

Yesterday I watched Hungry For Change which is a documentary about food that you can watch for free online. 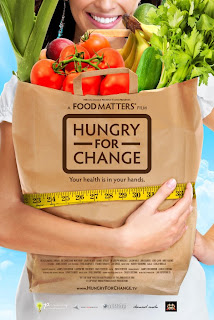 I heard about it from Run Eat Repeat and thought it sounded interesting. Basically it is about how America has a food addiction and we eat a lot of empty calories so we are starving for nutrients which makes us fatties. Overall I found it enlightening. Right after watching I wanted to clear out the cupboards and head to the grocery store and start a diet of celery and kale but came to my senses about what a huge waste of money that would be and found that there really wasn't much to clear out. I found the documentary a bit repetitive but overall interesting. I am not totally drinking the kool-aid about drinking juiced vegetables and only buying organic everything (mostly cause that stuff is $$$) but they had some great points.

1) Diet soda is evil. I know this. It is a bunch of chemicals. But it taste so good when it hits your lips. But still evil so it is going to be reserved for special occasions.
2) Eat more vegetables and less starchy, sugary foods. Makes sense to me. Vegetables are good. 10 pounds of Swedish fish taste good but probably are not doing a lot for me.
3) Diets don't work. No they don't. If they did we would all be skinny because apparently a majority of the population is on one at any given time.
4) Instead of restricting foods that you eat, try to crowd out less good for you food with more good for you food. Eat a salad and a little bit of pasta. Have vegetables be the main dish and other stuff the sides. This avoids the mental I can't have that which makes us rebel and eat a box of cookies in defiance.
5) Don't eat your emotions. If you are upset don't eat. We like comfort food but the love handles it produces don't love you back.
Overall makes sense. So after beating the treadmill into submission I headed to the grocery store to buy good for you food to crowd out all the candy I want to stuff in my face. 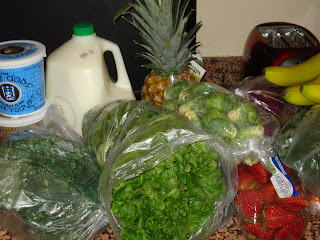 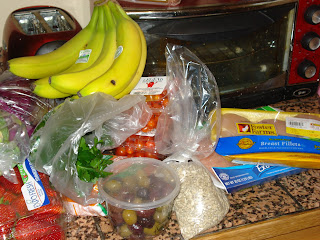 Things are about to get healthier around here.
Food Hungry for Change training run treadmill