March 18, 2012
This weekend is the last weekend before heading back to school. To send Spring Break out with a bang I decided to reside on my couch and catch up on some movies I have been wanting to watch. Plus it was raining so I couldn't possibly do my long run today. I might melt or worse get wet and chafe. Pajama pants and multiple movie viewings was the name of the game. (I briefly considered the dreadmill, long enough to cringe, roll my eyes and snuggle further into the couch. No way ten miles is happening on that torture machine.)

I have decided since I am an expert on cinema and that a review by someone with such fine tastes may assist you in your next rental decision. (Disclaimer: I am not an expert. I have watched Bridget Jones Diary and the Devil Wears Prada both at least 20 times. The only foreign language film I enjoy is Amelie because it mentions creme brulee and I thought the movie Burlesque was a shoe in for best picture (Cher you are an unappreciated gem). So you have been warned). 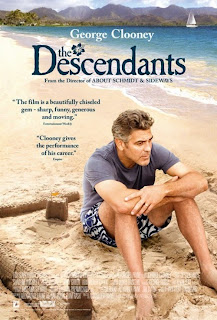 I had no idea what to expect from this film. I have seen Clooney do the awards circuit for this movie so that is why it was on my radar. Plus who doesn't love a movie set in Hawaii? Going in with no expectations I was pleasantly surprised. I am not one to love Clooney just because he is Clooney but I thought he was great in this and the relationship that develops between his character and his two daughters during the movie I felt was the reason to watch. Plus he makes you laugh when you feel that perhaps it is inappropriate which just kind of reminds you that life is just funny even if it is dark funny. See this movie but stash a tissue because if you are a big emotional cry baby like me there will be tearing up. Also be aware that you will feel the compulsion to buy a plane ticket to Hawaii as well. It is hard to look at that scenery and not want to be in it. 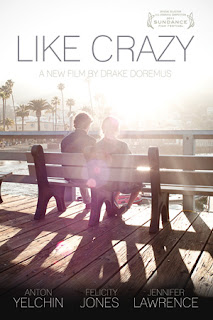 This movie was just......long and frustrating much like the relationship portrayed in the film about lovers who can't seem to get it together. At the end I felt the characters were hard to relate with or care about but apparently it has won some awards so it may just be me (please reference above disclaimer.) In other words this movie may have just been too deep for me. I tend to enjoy more fluff/ happiness in my movies. I would say skip it. 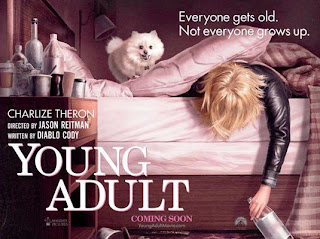 I really wanted to like this film. It started out okay and there was a time towards the end that I thought yes the main character is gonna get it together and better herself/ get some help but that never really happens. I enjoyed the beginning but towards the middle you realize that there are some serious issues underlying this film and that while some of it is funny, most of it really isn't. I would say watch it if you are a Charlize Theron fan. She portrays the main character brilliantly. I think also the main character is pretty horrible but she watches reality television, like tiny dogs and wearing pajama pants in public, so perhaps too personally relatable on my part since I enjoy the above mentioned things as well. So if you watch be prepared to question your existence and whether you yourself have grown up yet. 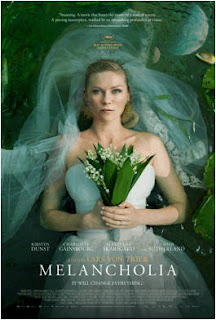 This movie made me mad. Because it was really great......the last fifteen minutes. Leading up to that I was confused and hated Kristen Dunst's character with a fiery passion. The slow moving opening scenes of this movie are interesting to watch. If you are looking to feel confused by the contrast of severe depression and Armageddon for an hour and a half and then terrified/excited for fifteen minutes this is the movie for you. And Alexander Skarsgard (aka Eric Northman from True Blood) is in it so that makes it kind of a must watch for some people. (Don't judge me) 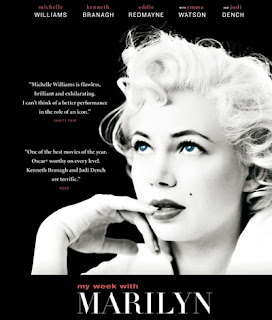 I loved this movie which I didn't expect. I don't know much about Marilyn Monroe (most of what I know is from watching the first few episodes of Smash) but if you are a fan of hers or just a fan of a good story watch this movie. The story centers around a young man who works on the film set of a movie in England where Monroe is a lead. It is in part about their romance but I think it is more about wanting to be appreciated for who you are and not for what people want you to be. Michelle Williams is brilliant as Marilyn. Plus Carson the butler from Downton Abbey (my current BBC obsession) and Hermione have small roles (not really Carson and Hermione, whoever those actors are, but still that is what I thought of when I saw them. I am sorry but you can't be in Harry Potter and expect people to not think of you as Hermione for the rest of your life. Deal with it.) I would say watch this movie.

So there you go. My words of movie wisdom. You are welcome for all this sage advice and happy viewing.