February 05, 2012
Warning: This post is long and has more pictures than really necessary

Saturday morning the alarm went off at 6a.m. and I had already been awake since 4a.m. Why oh why do I always do that? I was faced with outfit indecision again. I had brought four outfits to choose from. It was cold but once the sun came out would be warm. My leg was wonky and I had happened to order shorts (Aspaeris shorts) that are supposed to help with wonky but the world is not ready for my backside solely clad in a spandex like material sooo.... 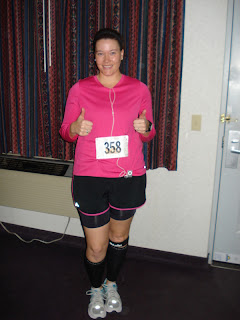 Long sleeve shirt and double shorts plus shin compression sleeves and knee brace for the win plus my awesome glitter bic band. Now I hadn't tried running in the compression shorts before so I was a little nervous about how that would go but I was more worried about my leg/IT band issue so thought I would chance it.

D and I left the hotel at 6:30 since our GPS said it was a thirty minute drive to the race parking and they recommended getting there at least 45 minutes ahead to deal with parking. We hit no traffic on the way there and it seemed like we were some of the first ones there. Parking was a 1/2 mile from the start. I have mixed feeling about this. For one it was freezing so it was a cold walk to the start and D who stayed with me until the start and came back after two hours to see me finish had to walk it twice. Plus after the race it was a long walk to the car which was probably good for me but seemed so annoying at the time. The start area was nothing special. Typical last minute packet pick-up area, aid station, volunteer booth and the wall of porto-potties. One thing they could have had was heat lamps. They had heat lamps at packet pick-up the day before but not at the start. Everyone stood around huddling together for warmth. 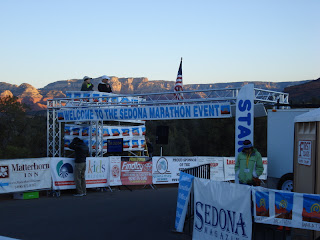 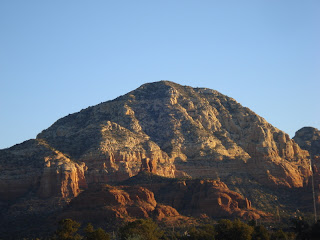 Once the sun came up it started to get warm. The marathon started right at 8a.m. and the half started at 8:15 right on time. The marathon, 1/2, 10k and 5k were all on the same course with different turn around points. This seemed to work out fine for the most part. The speedy 10k and 5k people kind of had to run back through the traffic of the 1/2ers which might have been annoying. 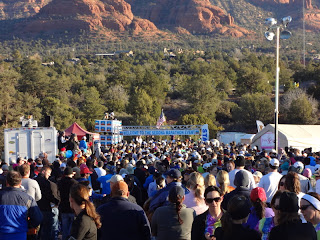 The beginning of the race was pretty crowed. You started down a side road and turned onto the busy main road for about four minutes before turning onto a less populated road which you stayed on the entire time. Once on that road it was less crowded. There was minimal traffic and police officers and volunteers throughout keeping runners on one side of the road. The road was nicely paved and easy to run on (no noticeable sloping to the side). 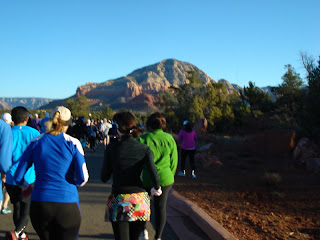 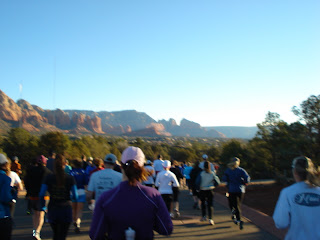 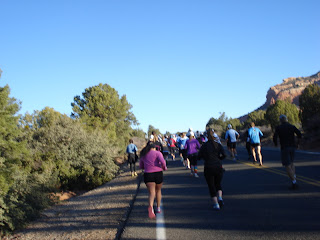 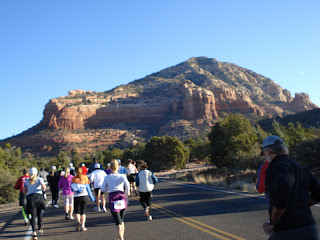 The views were amazing the entire time. Pine trees, beautiful rock formations/mountains, mix of shade and sun. There were aid stations about every two miles. They all had a mix of water and gatorade, orange slices and bananas. I think aid stations around mile 5 and 7 had cliff shots. At least two aid stations had gu of some kind. The volunteers were great! They cheered for everyone, some stations had music. One had a brass band. One station the volunteers were dressed like zombies, I don't know why, but it was pretty funny. There seemed to be plenty of supplies for everyone. The Pink Jeep Tours jeeps were located every few miles with volunteers ready to help anyone who needed it or who couldn't finish. They were also great with cheering everyone. The one negative was the turn around. It was pretty sharp and on a downhill. They recorded your number as you ran by, no cutters on this course. Had to slow a bit and then go back uphill. 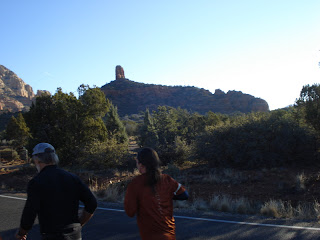 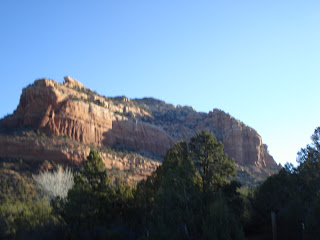 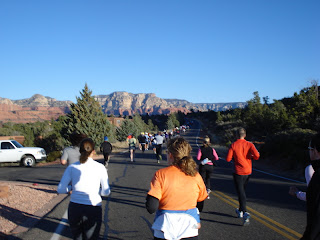 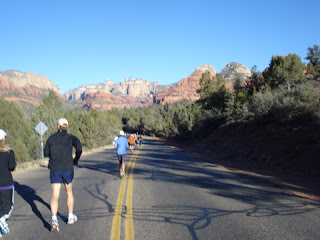 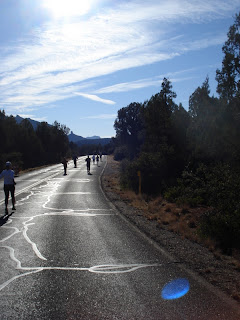 This course is hilly. Mostly feels like rolling hills but there was some pretty massive ones. I only stopped twice to walk a little bit on two of the hills. One was on the hill right at the end. Looking back I could have kept going but after an awesome down hill and then saw that hill I was just like no way Jose. I felt pretty good about being able to run almost the whole way on such a hilly course considering I never really run hills during training since the most convenient running location for me is flat. Reminded me that I am stronger than I think I am and a big part of running is mental. If I plan to run this race again, which I really would like to, I am going to train on some hills and plan on running with no stopping.

So how did I do:
Finished in 2:19:33, not a new PR but pretty good considering altitude and hills. I felt really good after and realized that I could push a little harder than I do. I went out slowly because I was a little worried about the altitude. I had to stop once to fix my shoe which cost me about two minutes. I also need to learn how to run and drink/ eat gu all at the same time without choking. I had two gus on the course and drank a mix of water and gatorade and walked through every aid station.


After swooping up my sweet medal, a banana, coconut water, and a GNC drink (they also had water and bagels) D and I headed back to the hotel to shower/change. We got them to let us stay an extra hour so we only had until noon to pack and get out. We were starving by noon so we headed to 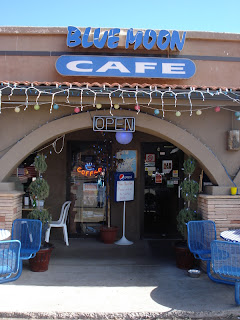 where I ordered this deliciousness. The cafe was cute and the food was delicious.

There was an awards ceremony at 3p.m. back in the Tlaquepaque village but we headed home after brunch. 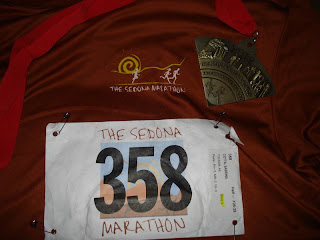 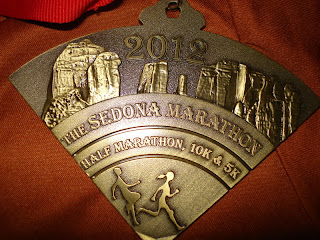 Overall I loved this race. Well organized, plenty of supplies, great medal (which is part of a four part series for the next few years so there is an incentive to do it again), great location, beautiful course. One of my favorites so far. I would do it again. Only cons were no heat lamps at the start and parking being kind of far. Definitely on the race calender for 2013!