April 04, 2016
This past Saturday I ran the Mental Health in Motion 5k with the awesome Run Therapy team, aka some of my most favorite running peeps. I finished in 27:36. Not bad for someone who hasn't really been running all that much lately. It was super fun to hang with these people. I will miss them quite a bit when we move.

After the 5K I realized I probably needed to get better about running more consistently again if I wanted to avoid the super loud mouth breathing, oh my god I am out of shape feeling from getting worse. Ever since the Lost Dutchman Marathon in February I have kinda just been winging it. Running when I want, for as little or much as I want. Which has been pretty nice.

I realized that I haven't had a voluntary break from consistent training in a few years. Probably not since I started my goal of running 30 marathons before turning 30. After the constant training for and running half marathons that were back to back to back I just kind of moved on to marathons. Then started working in running and coaching. The only time I took a break was when it was forced due to injury. Not the best plan. So taking some time off was probably a good thing.

But this past weekend when on Sunday I accidentally fell back asleep after my alarm went off on Sunday  (I am just gonna lay here five more minutes.....ahhh what time is it) to meet some people for a run I decided it was time to get back on the bandwagon. So I thought about what my goals were for my next race- the Santa Fe Thunder- in September and decided to try for a sub 2 hour finish. I have only gone sub 2 once before but I think I can do it again and the overall downhill on the course in Santa Fe lends itself to some fast running.

So base building begins. This goal may be tricky since this summer the hubs and I plan to spend some time outdoors backpacking but I am hopeful that activity will toughen me up a bit for running and also means I can fit in some amazing and scenic runs.

Max has volunteered to help with the stretching and rolling. So kind. 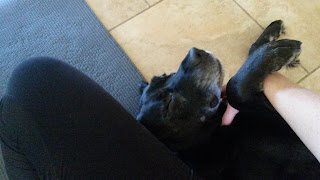 This morning 6 easy miles at an 10:18 avg and I only felt like dying a little. A good start.
5K running peeps training plans