February 22, 2016
Yes I went to Arizona to run a marathon but this race review will be mostly about food. As it should be....

Karen, Sarah, Michelle and I hit the open desert road Friday morning to drive to Mesa. Michelle was nice enough to not only drive but to do it in her brand new Jeep. My car was new in 2002 so that new car smell was intoxicating. Plus I forget how high tech stuff is now. I mean my car has a CD player....the end. New cars are pretty amazing. After about six hours of Madonna and other 80s awesomeness (thank you mix master Michelle) and a pit stop at In & Out in Tucson to refuel we arrived at Sarah's mom's house. Linda was kind enough to not only let us stay at her place but also stocked up on wine, delicious treats and chauffeured us around all weekend. What more could you ask for!?!

After laying around recovering from the hard work of riding in the car all day we put on real clothes (I was warned ahead of time that this would be the case.....this might have also been a 'you wear running clothes all the time and it needs to stop intervention' now that I think about it) and headed to TQLA. Which I pronounced T-Q-L-A....which is actually pronounced tequila....which only took us like an hour to figure out....so there is that. All of the tequila based beverages might have been a clue. After queso, veggie enchiladas and margaritas I was rolled to bed so I could recover for my next day of eating  packet pick-up . 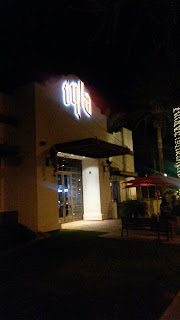 After sleeping in.....it was time to eat again!! Yay. Linda told us about a magical place that serves kool-aid and vodka together in a magical beverage creation so vodka for breakfast it was....only half kidding. 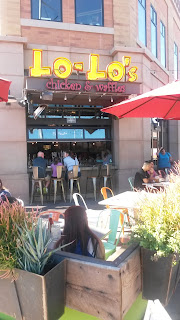 I only tried the awesome beverages as the marathon distance scares me and I try to hydrate with non-alcoholic beverages the day before. But they were delicious as was the food. I got bacon, eggs and butter with some grits. No seriously, so much amazing butter goodness. This place was delicious and I would for sure go back. 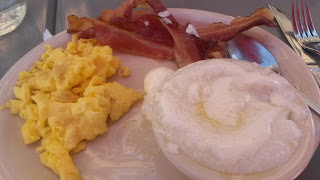 After carb loading with butter we made a quick stop at Trader Joe's to stock up on fun treats cause we don't have one in El Paso and that makes us all very sad here. Then it was on to packet pick-up in Apache Junction. The packet pick-up is small and easy to get to (especially if someone else is chauffeuring your butt around) and we all had our stuff in no time. Everyone was nice and helpful, well-organized and enough expo to buy a last minute Gu or accessory if needed. With 287 marathoners, 700 half marathoners and then around 600 each for the 8k and 10k distances this race is really the ideal size in my opinion. Never felt crowded. I like not crowded. 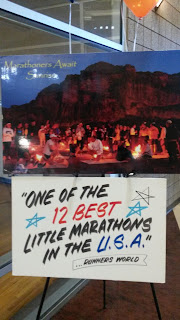 After swag it was time to eat again. Yay! We headed to Clever Koi in Phoenix for some delicious ramen. 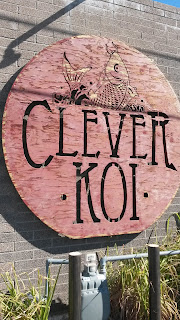 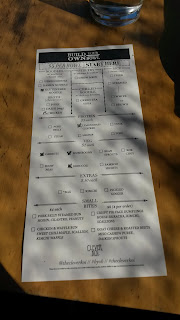 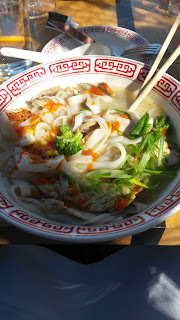 After eating we headed....to the grocery store to get food for dinner. For those keeping track we have only had breakfast and lunch at this point. Michelle offered to cook for us and she made chicken, sweet potato and spinach casserole, salad and broccolini. If you can get Michelle to cook for you, you are in for a treat.

While Michelle was slaving away in the kitchen Karen got all creative with this fun shirt shot. Karen also gave us Galentine's gifts of sippy cup wine glasses, peach martini mix, and supplies for fun glittery nails. So awesome. Off to bed early for my 4:15 wake-up. Everyone was nice enough to also get up super early to take me to the buses to get to the marathon start. After a 30 minute bus ride up a dirt road we were dumped out to bonfires and a million porto-loos. This is the first race I have been to that there was no wait for the loos. Like I seriously had my own. And for that I deem this race Race of the Year. 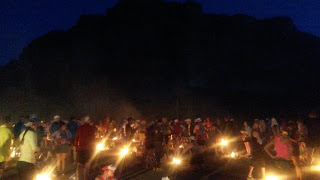 The bonfires were pretty but also kind of unnecessary as it was already in the high 50s at 6:30am. When it was time to start a man with a mega phone was like lets go to the start and we all walked to the dirt road and lined up. Easy enough. And then a shot and we were off. The first seven miles were beautiful. The sun rising over the mountains was lovely on the desert landscape. The road was dirt, so nice and soft, this entire race was fairly hilly, hillier than I expected but nothing too crazy. I was cruising right along at a fairly good clip until around mile 15 I started to get the chills. It was warmer than I have been running in lately. Even though I tried to stay hydrated the lack of shade, direct sun and running on hot asphalt started to catch up with me. 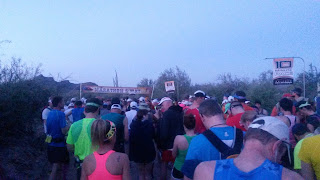 The last miles got a little slow but I chatted with some nice runners. About the last half mile I saw Sarah and Michelle and got so excited!  It is really nice to see people you know out on the course and having them run me in made the last mile less sucky. Sarah asked if I was okay and that is when I realized the loud mouth breathing had reached a new level, the heat had really taken it out of me and the last few miles were a struggle. I could spot Linda and Karen at the finish which helped me keep up the momentum. At the finish they had ice cold water and ice cold wash clothes which was the best thing ever since I was covered in salty sweat, like sweat rings all over...so gross. After taking a minute to catch my breath we wandered over to get a group shot with the miner cause why would you not!
Overall I enjoyed this race. The scenery was nice pretty much the whole way, the aid stations were good (except they ran out of the promised cold towels around mile 20 which was the only thing I could think about for miles and then nothing, not cool. Guess I will have to run faster next time). The most important thing was I had fun. 5 hours and 3 minutes of fun. And besides my quads being destroyed at the end from the hills my body felt pretty good. My knee still feels a bit off even with the brace but no pain. So win. This race was hotter than I wanted it to be but oh well. Backing off and focusing on staying hydrated meant I felt pretty good at the end. 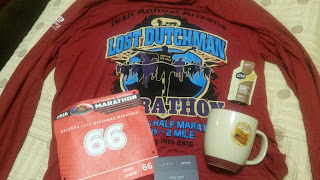 After the race we headed home where Linda made us an amazing cheese, meat and veggie plate because by that time she had picked up that we like to eat every twenty minutes. After showering and lounging for a bit (including standing in an ice cold pool which felt amazing) we headed for High Tide seafood restaurant for Galentine's Day cause yay eating.

Monday it was back on the road for us, where each pit stop resulted in a more pronounced hitch in my giddy-up as my legs got tight from sitting. I had an amazing weekend and a great race. Thank you to Karen, Michelle, Sarah and Linda for such an amazing time!!! I feel very lucky that I have found other crazy runners who like to travel to fun places to eat....and run.
Galentine's Day. Lost Dutchman Marathon Lost Dutchman Marathon review Travel