So there has been this news story everywhere. Woman run's marathon while free bleeding. Woman runs marathon without a tampon to fight period shaming. I can not look at any sort of news feed without STILL seeing this story. Like it has been in the news cycle for two weeks. Why? I just don't get it. Apparently she got her period the day of the London marathon and bravely decided to run it anyway and then wanted to stand up for period shaming by bleeding all over herself during the run. 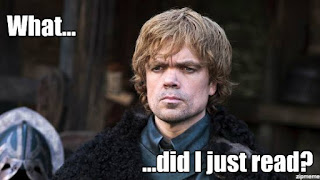 News flash: like half the population has periods, is going to have a period at some point or at one time was getting periods. And that population has a sub population, i.e. females who run, run while on their periods. They run big races and small races and Olympic marathons and local 5ks and none of them made a fuss about it. They have also cycled, swam, flown fighter jets, climbed Mount Everest, made important scientific discoveries and in general went on with their day to day life. Running on your period isn't brave, it is a fact of life. And what is period shaming? Is this so common place women should be taking a stand on it? Am I this out of the loop? Please someone enlighten me as to why this is such a big deal? And after you do that take a stand against period shaming by purchasing tampons from the youngest most awkward looking sales clerk at your local store. But way to go on the London marathon period lady. Amazing race. Hope to do it someday

So besides that amazing news story the other thing I just don't get is people being asshats to other people... well in general, but there is a specific case I have in mind. My friend Amanda (met her at Ragnar Napa Valley- she is amazingly sweet and a kick ass athlete and has a super cute blog) has been tackling not one, not two but three sports by doing triathlons. She qualified to represent the USA for the World Duathlon Championships in Australia in October by the way. No big deal. Anywho, she freely admits that swimming is tough for her and she has been trying to get better. She went to the pool the other day, got in the designated slow lane and the proceeded to have the two other people in the slow lane throw a fit about swimming with her and had the lifeguards rearrange the pool to accommodate them and made the whole situation super embarrassing...and WTF.

Who do these people think they are? Finding out about this made me so mad! I don't care how talented you think you are or how talented you actually are, BE NICE. Putting yourself out there, trying to get better at something you care about, being unsure of how you measure up to others, feeling slow or awkward, we are all going through that and it would be a whole lot easier if instead of competing against each other we applauded each other for the effort. So today I would say go out and be nice to someone.


Rant over. Happy Thursday!
I get new insoles tomorrow- fingers crossed I am back to running soon!