March 25, 2014
The Georgia marathon was a ton of fun. I got to go with two runner friends, Nicole, this was her first marathon, and Kelcey, who had just run the weekend before at the Shamrock marathon, and then there was me of course with my bum tendon. We were not really sure how the marathon would go but we all figured we get to the finish line at some point.

On Saturday afternoon we struck out from Columbus and made our way to Atlanta and went directly to the expo. The expo was a decent size. Bigger than the Birmingham expo, a lot smaller that the Chicago one sooo maybe average size. After picking up our numbers we wandered around to see what goods we could find and free samples to try. We spent about an hour and a half there, probably the perfect amount of time. Afterwards we checked into our hotel, the Quality Inn whose quality was questionable (no air conditioner, elevator was scary) but was on the cheaper side and the only available option by the time I booked and it ended up only being about two blocks from the start and finish and perhaps most importantly within walking distance of dinner. 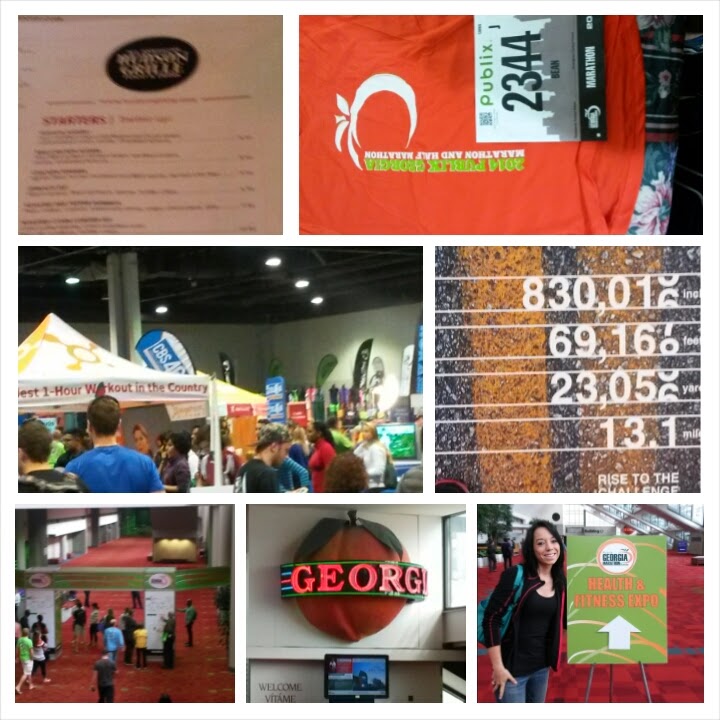 We headed out to dinner about 5:30 to the Hudson Grille a few blocks from the hotel and found ourselves surrounded by cowboy boots and rhinestones. A George Straight concert was also happening that night. We ended up having to wait about an hour for our table but their was plenty of people watching to be done. After dinner it was back to the hotel to lay out outfits, watch reruns of Modern Family and off to bed early. The 5 a.m. alarm woke no one, we were already up. The best thing about the Quality Inn- there was coffee available at 4:45 in the lobby. Win! 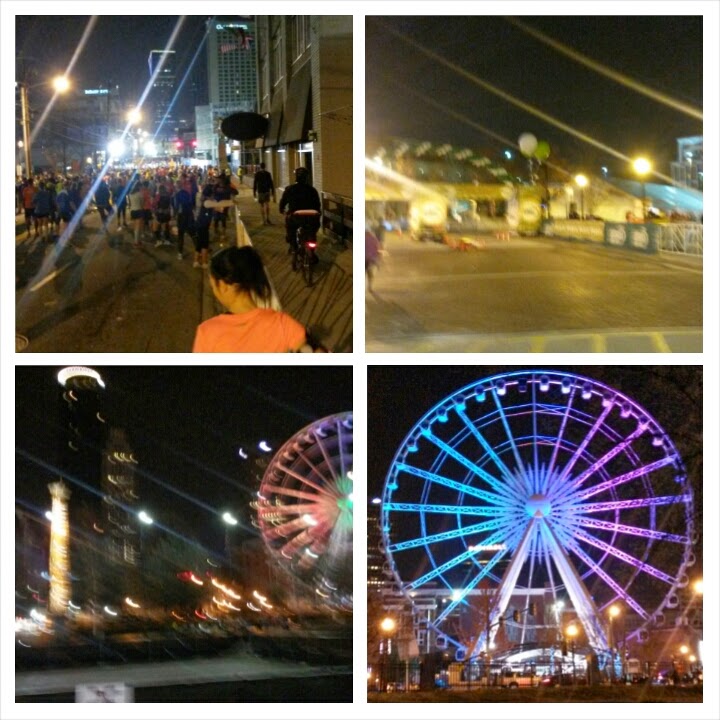 After fueling up with some delicious gluten free apple muffins Nicole baked for us we headed out the door at 6 a.m. to load our stuff into the car- no late checkouts to be had at Quality Inn- and walked to the start area. It was cool to see Atlanta in the early morning with all the lights. The staging area had plenty of porto potties, there was a station with water and Powerade, you could buy coffee, overall I felt both the start and the finish were well organized. There were thousands of people...I think I heard 13,000...but could be making that up. We were in corral M and it took us about 20 minutes to get across the start line. And then just hills, hill after hill after hill. I don't think there was a straightaway at any point during the 26.2 miles. I went into this marathon thinking I would finish in 5:30 hours. My foot/ankle was fairly sore and the only hills I had run was this past Monday where I ran up a giant hill twice in some sort of hail Mary pass at hill training. After about the first half hour of the race I was revising my finish time to 6 hours. 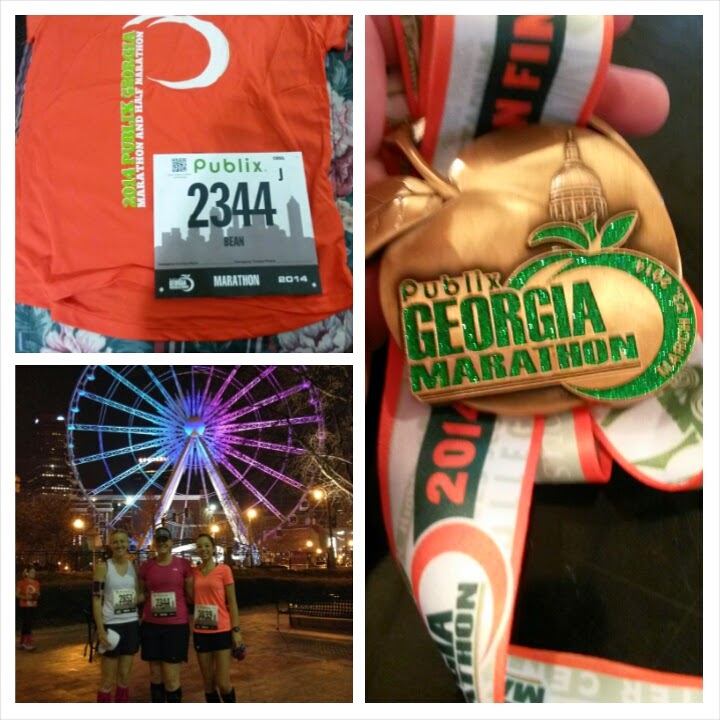 But Kelcey, Nicole and I just kept chugging along and after awhile we walked up the biggest hills and ran down in a kind of ultra race fashion. No need to fight you hills, we surrender. When we got to mile 20 Kelcey and I could tell that Nicole was feeling pretty good still and she is a very strong runner so we urged her to put the pedal to the metal and see what should could do. And she flew finishing sub 5. A really amazing first marathon time especially with all the hills. I was so excited to hear how well she had done. She was nervous as running the marathon with us was a recent development but she freakin killed it.  Kelcey was kind enough to stick with me when towards the end my foot/ankle tendon was in full rebellion. It did not like me pushing up those hills. At some point we realized we were gonna finish sub 5:30 and had to high five each other. Go us, take that hills. Kelcey, who had run a marathon six days earlier took down this marathon like it was no big deal. Who are these amazing people I know!?!? I wish I had taken more pictures of the course. Overall I thought the course was very pretty. We got to go through some beautiful neighborhoods, Piedmont park, downtown, the city of Decatur, all of it very nice. I think if we were to remain in this area I would actually do this marathon again. Maybe train on some hills next time. Like any marathon the last two miles seemed like ten miles. We had fairly cool weather the whole way but the sun came out during the last two miles and I immediately was like it feels hot, are you hot, I'm hot. Yes the sun makes it warmer out now shut up about it. It was great to run through that finish line and grab the medal which is awesome. One of my favorites. The shirt is nice too. One I will for sure wear. 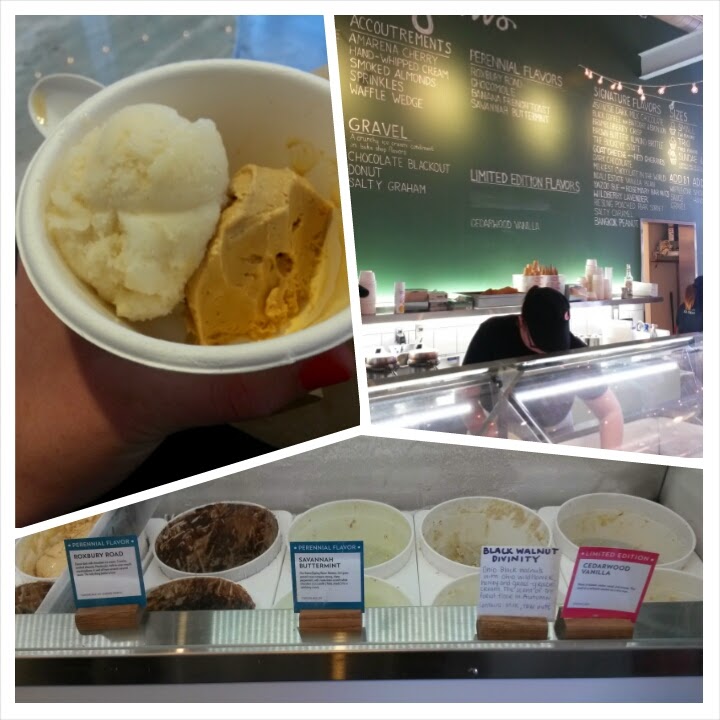 After finding Nicole, grabbing our food bags and making our way slowly to the car we immediately headed to Jeni's Splendid ice cream. And it was splendid. If you stumble upon one of these shops get ice cream. I had a sorbet made out of Riesling. Whaaattttt. Delicious. There was one made out of goat cheese....it was amazing. Once we had refueled with the most perfect substance on earth we headed home. And once home I stood at the bottom of my loft stairs for about ten minutes just gazing up and wondering how I was going to get up them. Hills hurt.

Overall I really enjoyed this race. Beautiful course, almost perfect weather, great running friends to share it with. While I really enjoyed training hard and going for a PR at Albany and having Buddy to run with there, it was nice to just go out and run and not really worry about my pace or if I was lingering too long at the aid station giving away Oreos (give me all your cookies and no one gets hurt).

Oh yeah I finished in 5:11: 36...not bad for someone who did spend quite a bit of time at both the jelly bean station and Oreo station.

Thanks to Nicole and Kelcey for being the best runner friends a gal could ask for. I will run a race with you ladies any day!!!
Georgia Marathon