November 06, 2013
Confession time. I did not go to body pump yesterday.I got up, I got dressed, I ate a honey stinger waffle for energy (okay I ate it because it tastes like magic) and complained about going the whole time. And then I realized that the reason I did not want to go is because the instructor on Tuesdays is super screamy and negative and I just do not want to hear that at 6 a.m. I go to group class for someone to encourage me to keep going not scream at me about how much my form sucks. Let's be upbeat about how much my form sucks. I have only gone to this one instructor's class once but once was enough to make me not want to go again. First impressions matter I guess.

The issue is while I thought I was mature enough to pump the iron on my own, I even laid it out to tackle after my speed session on my treadmill, but apparently not. 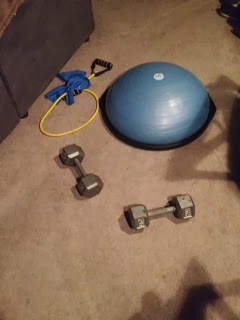 Weirdly most of the workout involved me laying on the floor watching House Hunters.

This does not happen at body pump which means I should probably just suck it up and endure the screeching.

On to the positive: New record for Couch to 5k group yesterday for speed over three miles. Kendra smashed a goal so that was pretty amazing. I thought she might punch me after but she didn't so ....success!

And it is vacation time this weekend. We are headed to the beach on Friday! Can't wait!