October 02, 2013
aka the time I ran up and down a mountain for the last six miles of a marathon. But we will get to that. We started off the day by being brilliant and hitting the porto-loos on the course which happened to be on our way to parking. No lines for the win. But there was a line to get to the parking area. As the start time for the marathon approached Cat was kind enough to jump out with me and walk to the start while her hubs and the amazingly speedy Juli (Cat's running friend) parked the car.

It was a beautiful morning for a run. 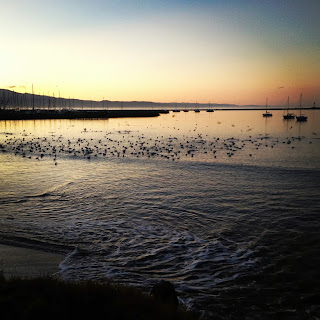 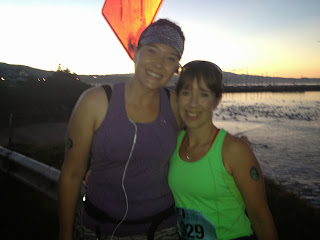 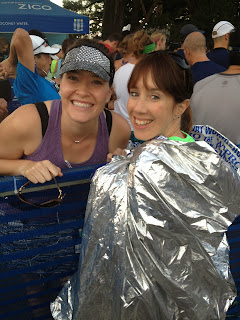 They ended up delaying the start by about 15 minutes due to parking delays. So we just hung out and waited to run. My general race plan was to go out slow and no music until after the half way mark in an effort to keep it easy and hopefully give me a boost as I got tired. I decided to walk through all the aid stops since I was not carrying any water myself. Overall this plan seemed to work pretty well. 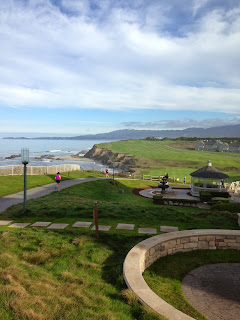 The course was amazing. Along the coast, perfect weather, perfect temperatures - warm in the sun but never ridiculously so. You could hear waves crashing for most of the course. There were a million restrooms on the course and plenty of aid stations. They offered first time marathoners red bibs so they would stand out and we could cheer them on. That was really fun. All the first timers looked like pros out there. There were some trails for a few miles around mile 9 that were a bit tough and some hills around the first turn around that were not easy but I felt like the race was going pretty well and then around mile 19 a mountain happened. 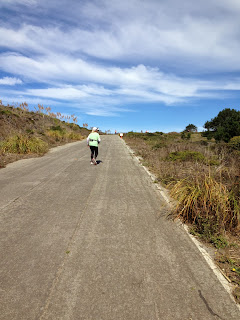 It was a bit defeating to feel like I was cruising along and then turn a corner and see all the runners walking up a huge hill.
The website elevation chart was a bit smoothed over. This race had some hills and then a giant mountain at the end.

My average pace for the first 9 miles was 10:34, second nine miles 10:24 (negative split whoop whoop) and the last 7.65 was 13:52. Damn mountain. I had hoped for a PR up until mile 18 I felt I was ready to throw down (my version of throwing down) and run hard but then when I saw those hills I was like just get through it. And I did finishing in a solid 5: 11 (Cat did the math for me and since the course ran long and even though the race officials say that only the half ran long not the full I find an extra half mile ran a bit extreme for the course being measured correctly- if it had been 26.2 instead of 26.68 my time would have been 5:05, oh yeah). 5:11 or 5:05 with or without and extra half mile I felt good about the effort I put in up until mile 19. And then I let the hills get the best of me. 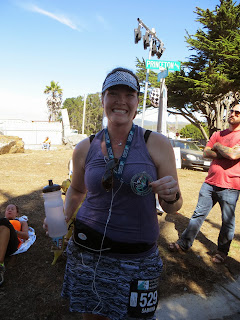 Overall this race is well done but the course is on the tougher side. The race shirt and medal are top notch. Bart Yasso was an amazing speaker at the packet pick-up and it was so exciting to meet him. The course had plenty of aid stations and was well marked. The best thing about it was that I got to do it with running friends who killed the half (2 personal bests and a killer performance on a hard course were obtained that day). I also got to go straight to Matt and Amanda's home for a hot shower and food directly after the race- they are the most amazing people to let me a)in their car and then b) into their home. Thank you! 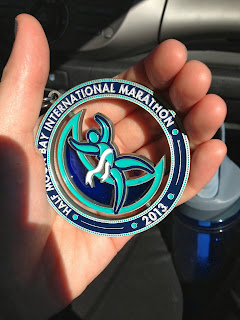 Overall I enjoyed this race but I enjoyed the people I got to experience it with the most! And one more gem of a picture. I was caught trying to come down the stairs. It is extremely tricky after running 26 miles. I am nothing but grace and poise at all times. 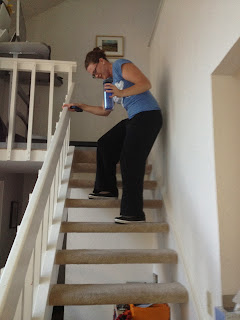 If you are interested in another version of The Tale of Half Moon Bay head on over to My Heart's Content.

To the Heart's Content family thank you again for letting me into your home, showing me the most awesome time and letting me steal some photos! You all are the best and I can't wait until we do it again!