The Most Horrifying Day

August 04, 2013
The word on the street is that I am moving. Oh wait I put that word out on the street. But in case you missed it, I am moving. And that means an ungodly amount of hours putting things into boxes.
For those interested in the longer version of the story (the short version being I'm moving) the D, aka the husband has gone back into the Army (prior service for many a year) as an officer. He has been away the last few months at Fort Benning in Georgia. I have stayed up here and continued to work until he figured out where he would be for the next extended period of time. Turns out he will continue to be at Fort Benning for awhile and since I miss that guy I am going to move down there to be with him.

Therefore the large amount of french fry boxes occupying the house and the scenario that led to the most horrifying day. Today I decided to organize the stuff we have stored in a shed outside. Clean it up and get it ready to go into the moving truck. This meant opening the house of horrors which happens to be the shed which contains numerous giant ass spiders everywhere. I put a hat on. I pulled my hair up under it. I put on gloves- thick leather spider fighting gloves. I did deep breathing exercises and did a pep talk. "You will not win spiders. I am not afraid of you. These are my yard work tools not yours. Surrender the shovel you eight legged freaks."

Then I unlocked the shed doors. Flung them open and about passed out when I saw at least five large as your hand spiders scurry away from the sunlight.

When you move you really evaluate what you use and value versus what you don't. After seeing the nightmare in front of me I began to think that I really hate yard work and I would survive if I did not have a snow shovel or two to move. I could just leave this crap stuff for the next tenants. But then I thought no. I am an adult. A recently 30 year old adult. Deal with the situation. So I barged in. And by barged I mean sprinted in, shrieked every time I thought I saw something move and flung crap out of the shed at top speed hoping that the impact of a shovel flying into the ground at top speed would stun, kill, scare the spiders away. I am not proud at how often or how loud I yelled every time I thought something touched me or I thought I saw a spider but whatever I am moving. The neighbors can think what they want.

After everything was out of the shed. I rinsed it off and organized it in a trash can to move to our next home. And then was faced with a problem. Where do I put it. No way it was going back in the shed. That would defeat the whole purpose. 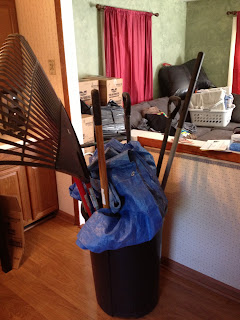 Instead I drug the whole think up a flight of deck stairs and into the kitchen. So that happened. Perhaps I should have done this closer to the move. After that few hours of ridiculousness I drank the rest of the rum we had in the house. 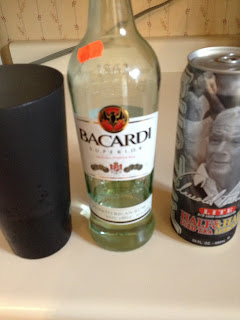 What, you can't move an almost empty bottle of rum. And also drinking rum results in blog posts like this.

And since this is a running blog also know that I cross trained today- walked six miles and did body weight exercises. I also had a sustained elevated heart rate the entire time I was dealing with the shed situation. So two cross training session really.
cross training Moving