April 23, 2012
Holy hills batman. The Horsetooth Half was a monster. I ran it back in 2006 and somehow blocked out how much this course makes your entire body hate you the next day. I made the BIL, sister and their dog River get up and drive me to the race start a few blocks away from their house because I am a baby and the thought of walking an extra half mile on top of running 13.1 was just too much for my little brain to handle. The race started near the CSU football stadium so there was plenty of parking for everyone.

After the race started it was up a monster hill right away. My game plan was to just keep moving forward (as opposed to rolling back down the hills I guess). I never run hills so I was not shocked when I had to walk a lot of them. Me and a whole lot of other people that is.


Part of the race was run next to Horsetooth reservoir. It was a very nice day out. A little on the warm side and a little windy but not too bad. 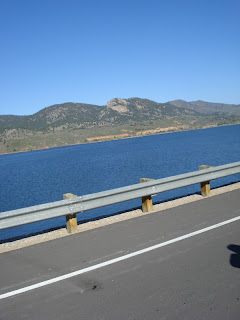 Perhaps one of the not so great aspects of this race is the fact that you can see the hills that you are going to have to climb from quite a distance. They just sit there and taunt you as you wheeze your way over to them. 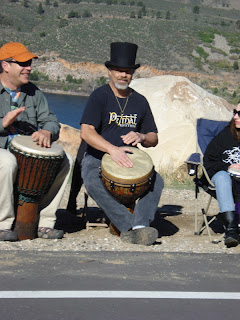 When we got to the top of Monster Mountain there was some entertainment for us. So funny. I almost wore that same exact top hat for the race. 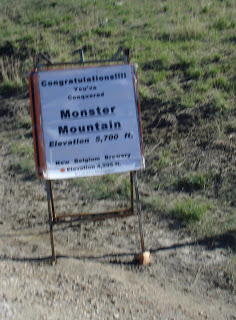 Once we got over what seemed like 80 miles of super steep hills there was a nice long downhill that transitioned out of the mountain area and back towards the city. 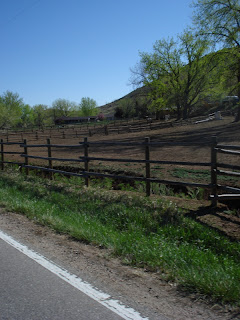 Once we made it back to flat land we transitioned onto the Poudre bike path. The path was probably the hardest part. Harder than the hills even. It was when I could really focus on the fact I couldn't breath and my legs were dead from pounding down the hills trying to make up for the lost time on the uphills. I probably should have held back more on the downhill but it was just too much fun going fast (or fastish). 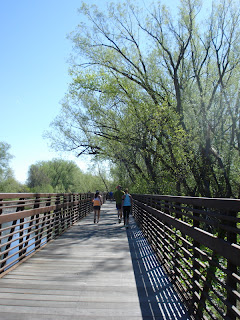 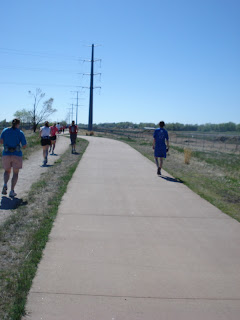 The bike path was pretty exposed and it started to get warm. They also ran out of cups at a few of the aid station which meant people who weren't carrying bottles were trying to cup water with their hands and shovel into their mouths. Not a great situation. Luckily I brought my bottle. After reading other reviews of this race a common complaint seems to be not enough aid stations and running out of supplies in earlier years. 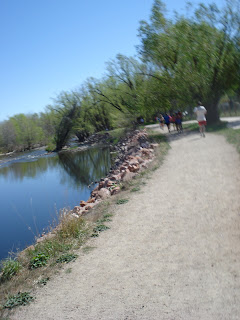 My goal for this race was to finish in less time than I ran it in 2006. And I did by about 12 seconds. So .....goal accomplished? This race had some mid-course goal adjustments happening. I honestly thought I would run a little faster but now thinking about it I am not sure why. This race is at a higher altitude and involves hills (GIANT HILLS), two things I ignore in my training. In 2006 I lived in Fort Collins and ran this course as practice so in that case perhaps I am in a little better shape now since I ran a similar time (though also older, but I like to think I am maturing like a fine wine). When I realized how slow the last few miles were going I had to just let my goal of finishing faster go and just enjoy myself. There was a time were I would have been upset about this but I think doing all these races has taught me how to adjust as needed and seeing as I am not going to win, it really is all about the experience, having fun, pushing myself and getting sweet race medals. Some races are for setting PRs, some races are for being grateful that you get to run (when you are not questioning whose bright idea it was to sign up for this thing and wondering why your legs won't respond to your commands).
The best thing about this race was that my sister, her fiance, and my parents were at the finish line cheering me on. I got so excited when I saw them I did a weird double wave, jumping jack while running move. Pretty graceful I am sure. 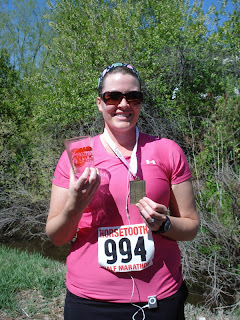 At the finish a boy scout handed me a medal and a pint glass. They did not hand out water at the finish but there was a big spigot thing that you could use to fill up your glass with. That kind of annoyed me but I get that they were trying to be green.
So how did I do, well official results are not up yet but garmin says:
Finish: 2:26:40
By mile: 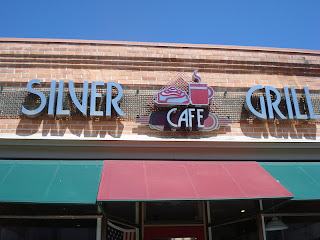 for some of this 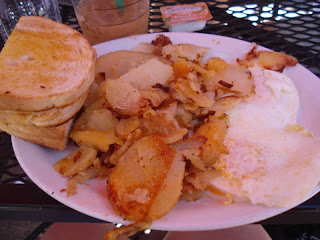 Overall this race was difficult but scenic. You can't beat the scenery but it takes some hill climbs to get there. The concrete bike path is pretty punishing on the legs after the uphill/downhill portion. I couldn't get it going on the bike path. The effort it felt like I was putting out should have been at least ten minute miles but were 11s. This is not a course to PR on but Fort Collins is a fun place to visit and this race is pretty well organized. Packet pick-up and the finish line is at the New Belgium brewery so that is a draw plus there is free beer at the finish for participants. Bring a water bottle or hydro pack. They seem to consistently run out of supplies at this race so better to just bring your own. I didn't see any gu on the course so bring your own of that too if needed. (I ate three in an effort to not die, but it didn't really help and I felt kind of bloated at the end probably from the three gus and three water bottles I drank, I was a sweaty beast for this one and the sun was pretty intense the whole way).
After b-fast I headed back to my sisters to defunk and then we all headed back down to old town to eat ice cream and wander around. Then my parents took me back to the airport and back to 90 degree Tucson weather after we hit up Runza for dinner (So basically from the time the race ended to the time I got on the plane I just stuffed my face. Love it.)
A super fun but too fast weekend. I was a lot of fun to have family at the finish and made the race that much more special. Thanks sister for the pictures and the good time and family for helping me celebrate finishing half number 14!
30 before 30 Horsetooth Half medals