March 25, 2012
This morning the alarm went off at 5a.m. and I again had anger issues with the early hour but managed to roll myself out of bed, down ice coffee and be ready to go by 5:30.


D got up to take me to the race. That was a nice surprise since he hadn't been feeling well the night before and no one feels good at 5a.m. There was only a 30 minute drive to the start/finish line in Oro Valley which was next to Ventana Medical Center. There were real bathrooms and porto potties for everyone. They also had a VIP area where if you paid extra you got to eat a bagel in a roped off area and a zip up jacket plus your own porto potty to share. There was probably more involved but I only saw bagels and toilets. 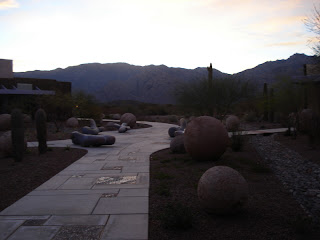 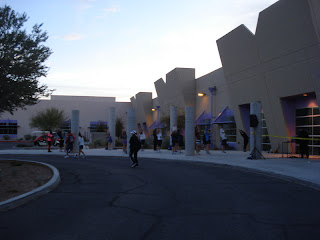 They had pacers for every 15 minutes that had yellow balloons with the estimated finish time attached to them. For a brief minute I thought I should run with the 2 hour pacer and then remembered this:

And thought naaa. I should probably just run on my own or I may die.
The race started right on time (7a.m.). Both the 10k and the half marathon started at the same time. There was also a 5k but that started 15 minutes later I believe. It was a little chilly waiting around for the start since there was a slight breeze but not too bad. 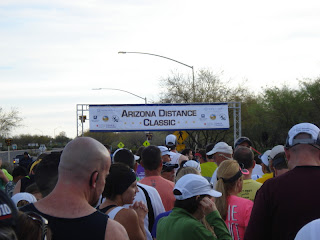 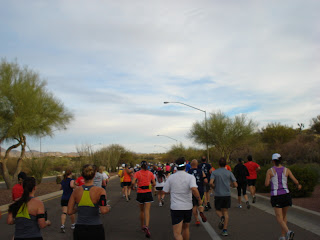 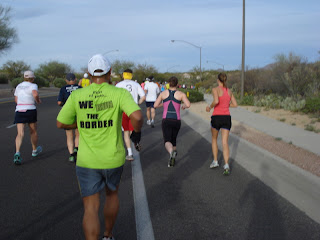 The course was all on roads. We had a whole lane blocked off for us most of the time. It was an out and back course through an area with lots of neighborhoods. For the most part it was very pretty but a little boring. This would be a good race to try to set a PR (except for the freakin hills of death) since you wouldn't really be missing anything if you just put your head down and ran. There were aid stations about every two and half miles. They all seemed to have Gu Brew and water and they were handing out Gu gels at the turn around point. There were bunches of small groups of spectators throughout the course and since your name was on your bib they would yell out encouragement. That was nice. Volunteers at the aid stations were amazing and the police officers that were helping with traffic control were nice and cheered as well. 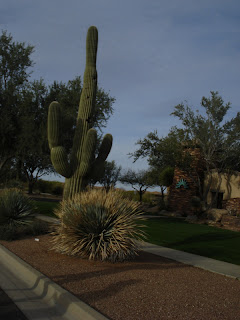 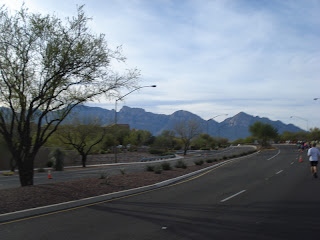 I am not sure what my deal is but I was just a sweaty mess this race. I mean I am normally a sweaty person when I run (or walk, or sit or just breath and I do live in AZ so everyone else is sweaty it is not just me, well sometimes it is) but this race was warm. It was around 70ish by the time I finished the race so that probably had something to do with it. I drank a lot of Gu Brew because I noticed that I was a hot mess and thought that electrolytes might save me. Instead they just made my intestines stage a revolt. Around mile 11.5 I had to stop and walk a little because I have a strict rule about pooping yourself. It is only allowable if you are an elite runner and an Olympic medal is at stake. Then it is okay. Otherwise if you are feeling distress just walk. That helped settle things down and with a little encouragement from a nice lady in a Chicago marathon hat got back to running and totally kicked some butt on my way to the finish. I think I passed about 5 or 6 people. The finish was downhill so that helped but I did feel slightly like I was going to pass out after pushing so hard (a 7:04 pace for the last bit, I have no business flinging my body around at that speed). 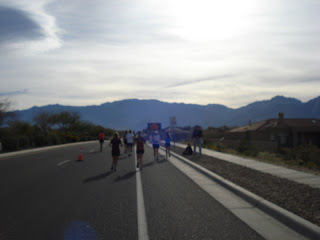 D said that he knew I was going to be hurting when I finished because people were crossing the finish line and falling down, or had wobble legs, throwing up etc. Sounds like a party. He was right I felt pretty spent at the end. 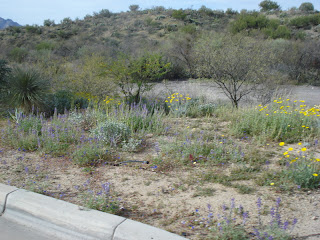 I only ate one Gu (around mile 6) and probably should have had another towards the later half but couldn't do it. I was very tired by the end though. I also ate a chocolate mint cliff bar about an hour before the race. So the Gu brew probably did help. I probably just got a little too excited about drinking it and should have had more water as well.

I tried to start out more conservatively this time so I wouldn't be super tired after two miles. That seemed to work okay and a good thing too because there were a lot of hills.

I still drowned myself and had to walk through the aid stations. I just can't figure it out. Breathing, running, cup folding, drinking.....too complicated apparently. And my first half of the race was still faster than the second half. So some stuff to work on. I was curious to see what would happen after mile 6 since I haven't really done a long run in 3 or 4 weeks. Well I pretty much blew up around 9 and things got pretty hard after that. Mystery solved. Do long runs.

D took me out to breakfast after at a place named Coco's we drove past on the way to the race. 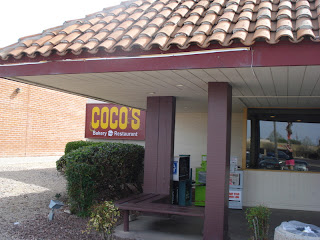 It was a bakery and restaurant. Their menu was a major buzz kills since they listed the calories for everything which was fine if you stuck to the light & fit section of the menu. Venture from that and things got depressing.  I don't really want to know that the stack of pancakes I want is my calorie intake for the week. Ignorance is bliss in this case. 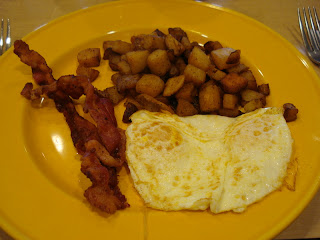 I ended up with my usual eggs, potatoes and toast. I gifted D with my bacon. Repayment for race accompaniment. The food was good, but nothing special. It is Bobo's or nothing as far as breakfast is concerned. They just can't be beat on taste or price.

Overall this race was well organized, had plenty of volunteers, was easy to get to, plenty of parking and had a nice medal, shirt and gear bag. The course was difficult (wait what is that calf muscles....oh you hate me, yes I can feel that, thanks for sharing) so be ready for hills. The up and downs will wear your legs out, especially if you decide that a four week vacation from long runs is the best way to train for this.

I am pleased that I survived and think of this race as a good training run for the hills I will face in April running Horsetooth and Mt. Lemmon. Now if you will excuse me I need to go bond with my foam roller for the rest of the afternoon. 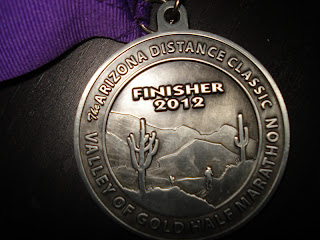