January 23, 2012
On Saturday morning we got up bright and early at 6a.m. to get ready for the race start at 7:30a.m. for the Temecula Valley Half Since we were only 15 minutes away we could kind of sleep in. After glancing out the window and seeing it was raining my dream of a cute running skirt outfit was dashed. Long sleeves and capris it was.

After finding parking pretty quick we headed into the winery to get out of the rain.

There were porto potties but also real bathrooms inside the winery open to runners. They opened up their barrel room for runners to stand in to get out of the rain. The race was delayed by 15 minutes due to the weather and the amount of slow pokes still backing up traffic. That kind of annoys me when people don't head out early enough to be there on time. You know the start time- make the magic happen.

I had wanted to carry my camera with me to catch the beautiful scenery but that was a no go. I did wear my garmin and ipod and crossed my fingers nothing would die. The race started around 7:45 in waves of about 100 every two or three minutes. The course was a loop with the beginning and end on the edge of the road. There really wasn't a lot of room to run along the road and the rain made it worse since the side of the road turned to mud. After the first few miles we turned onto less populated roads with no traffic so people were able to spread out.

There was water and some Gatorade along the course. I had thought there would be Gu but there was no Gu or anything else so I had to run the whole way on mostly water because I didn't bring my own. I got pretty tired toward the end as in my legs were not listening to my brain. Me: Legs go faster. Legs: la la la can't hear you.


After the finish there were bagels, water, and bananas. You could also go into the winery to do a tasting for $8 but it wasn't overly appetizing at that moment. So after getting our medals engraved A & I headed back to the hotel. 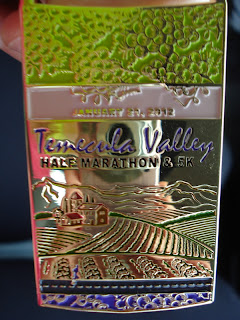 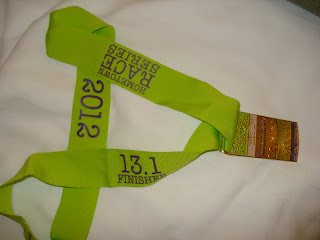 Back at the hotel we changed out of our soaking wet race clothes and got ready for wine adventure.


We headed out for brunch at the South Coast Winery. All the wineries were pretty much along the same road so you could wine taste for days out there. They were all massive and most offered wine tastings, maybe a tour and some had restaurants. We chose South Coast because it was on the cheaper end as far a brunch goes around $12 for an entree. 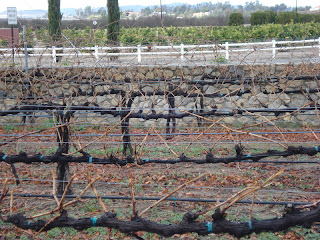 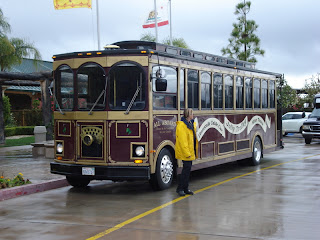 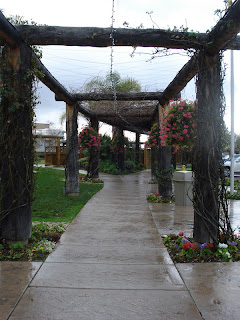 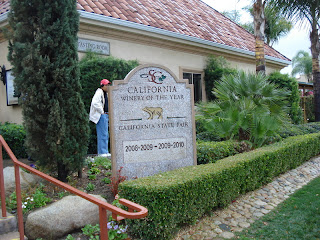 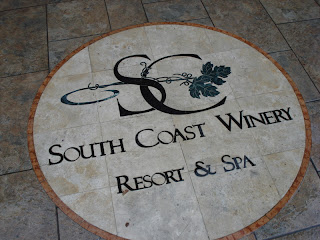 The inside of the winery was really beautiful and this place was huge. Besides a tasting room and restaurant there is also a spa and hotel somewhere there. 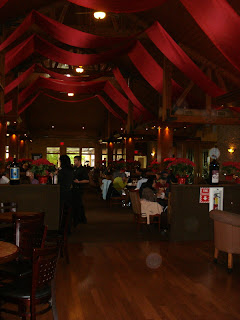 I tried a glass of their Riesling and had goat cheese pizza with caramelized pears and onions. Delicious. It felt really good to eat after only having a half a cliff bar and banana all morning and I just love to eat.

After stuffing our faces we headed over to the tasting room. A agreed to be the DD so I got to try the wine. 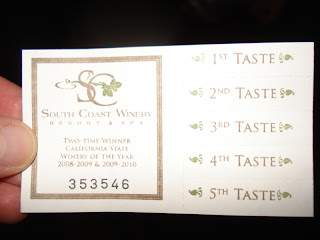 For $15 you got 5 tastings but the bar tenders didn't take the tickets so I guess you could stand there until you passed out if you wanted trying all the wine. Apparently this winery has won tons of awards. 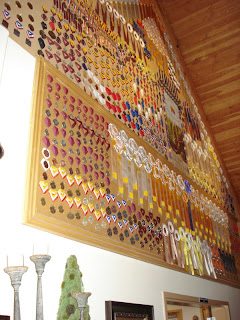 I tried their sweet whites and champagnes. They were all delicious. I bought D a bottle of red since he stayed behind watching the dogs while I was away. He is currently in the running for husband of the year.
After all the fun of wine tasting and eating we were pretty tired. We headed back to the hotel room to rest for awhile. And then A says to me hey the Carlsbad half and marathon are tomorrow we should go run that one. Me: yes lets do it, two medals one weekend. Awesome. After realizing it was sold out and going into a slight depression we got online to try to get race numbers on craigslist. Apparently people who can't run due to injury or whatever sell their numbers. (Though I would never bandit a race I feel that buying a number from someone is okay if you are willing to be "Dave" or somebody else for the day especially since there is no way I am going to win. That slot is reserved so you are not taking up space or supplies that wasn't allocated to you. End of disclaimer.) We put up an ad about our availability to take a number off your hands and searched for two female numbers near by that we could pick up race day. After that evil genius we headed to Old Town Temecula for dinner.


We had dinner at The Bank. Mexican food. Fairly decent. The Old Town part was cute and I would go back to explore it sometime during the day. After face stuffing  recovery meal two we headed back to the hotel. Unfortunately we couldn't locate numbers that worked for us but we decided that it wouldn't stop us from being cheerleaders. So we hit the sack with the plan to head the the Carlsbad marathon to cheer on our fellow runners. And that is where I spotted a celebrity......