October 24, 2011
When the alarm went off at 3:15 a.m. Sunday all I could think was nooooooo toooo early. But after a stern talk with myself I stumbled out of bed downed two cups of coffee, made some peanut butter and honey toast for the road, changed into my outfit and headed out the door by 4:00a.m.
All runners were required to take a bus to the start from the TMC medical center in Tucson. Since I didn't receive any busing instructions I left earlier than really necessary because I am anal and didn't want to miss the bus. The buses were lined up with a few of them for the full and a few for the half with big signs in the front window indicating full or half, yet some full marathoners still managed to get on a half bus. Really, I know it is super early but you have been training for months to run up this huge hill you think they would double check what bus they are on. The bus drivers were very nice and shoved them off at the full start.

As I munched on my toast we drove higher and higher up the mountain to get to the half start. As we passed the mile markers for the full all I could think was no freakin way would I ever want to run this full. Even riding on the school bus the miles passed by at an excruciatingly slow pace.

When we got up the half start, about a mile below the Windy Point area there was about ten minutes until the start of the race at 6a.m. For some reason instead of the buses leaving every ten minutes to take people they all left at the same time so a few hundred people all had to pee at the same time and there were only five porta-potties. Not great planning. I high tailed it off the bus and made it into the line pretty quickly but who ever was in charge decided to delay the race by fifteen minutes. Which was perfect because it was still pretty dark out.

The starting line was nothing but the timing equipment. But it got the job done. The race had a very relaxed atmosphere going which was nice.

After the National Anthem we were off (unless you were still in line for the bathroom).


The course was really beautiful the whole way. The Sheriffs department did a great job of keeping everyone safe with minimal traffic on the mountain so everyone could relax and take in the sights.

I ran the first two miles and realized that a run/walk relaxed race taking pictures and enjoying the opportunity was the way to go. No way I would be able to run the whole way. Basically I just kept moving forward until mile 8 when there was a little downhill. Then I ran like my pants were on fire or a bear was chasing me. (I seemed to believe that 15 minutes of sprinting would make up for an hour and a half of strolling?) 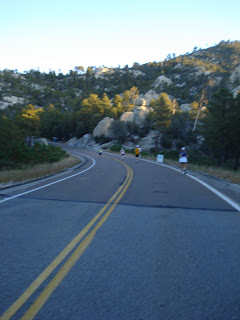 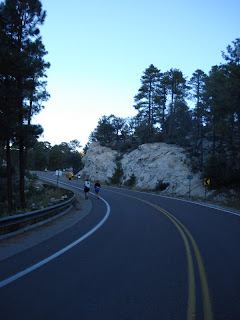 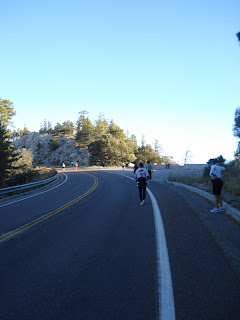 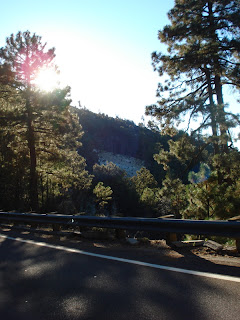 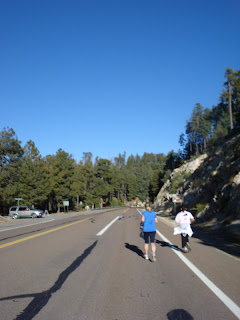 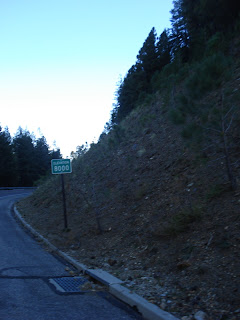 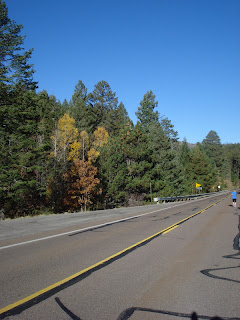 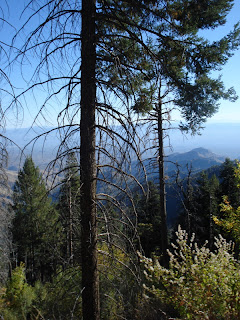 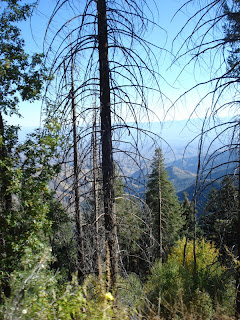 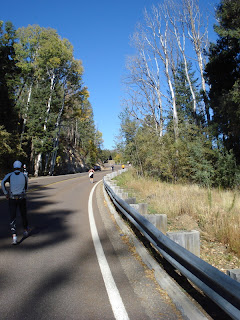 My motto for the race was- just keep moving. There was a lot of run/walking done by everyone (except for the insane at the front who win things like this) so I didn't feel too bad taking my time and getting my money's worth. Since it was so pretty and nice out it was easy to get distracted and start moving at a leisurely pace. I kept having to remind myself to pump my arms and keep it movin. 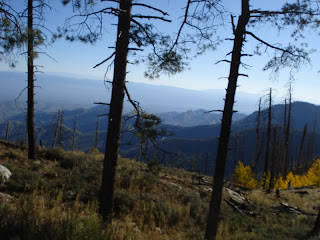 Most of the race was on the paved highway. The last part was on a dirt road through a neighborhood and was also downhill. The downhills were fun but man did they hurt after awhile. Since they were toward the end I was pretty sore by the time I got to run for more than five minutes at a time. I ran all of the down hills (the most consistent running I did the whole race) but it was not kind to the hips and feet. 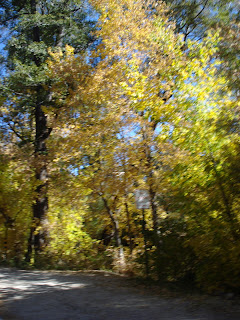 The finish was uphill which was a little cruel. But not horrible. They had muscle milk (bleh) and some people cooking a breakfast of eggs and tortillas. Plus a table of watermelon, bananas and bagels. There was no bottled water but large jugs to fill your own bottle or plastic cups.

Overall I really enjoyed myself. Probably not enough to do it again but I would recommend this race to anyone who is crazy enough to do it. The aid stations were nice, a little far between but had water, cytomax, and gu and fruit. There was some organizational issues with the buses and the expo was lame but you can't beat the scenery. I would recommend training more than I did. Hills hurt.

Overall: 2:58:56
Oh yeah that's the other thing. The course measured short, only 12.68 miles. But eh I still got a medal and after all that uphill I was pretty excited to see the finish line. This race left me excited for the Shun the Sun 1/2 on Nov 11th.